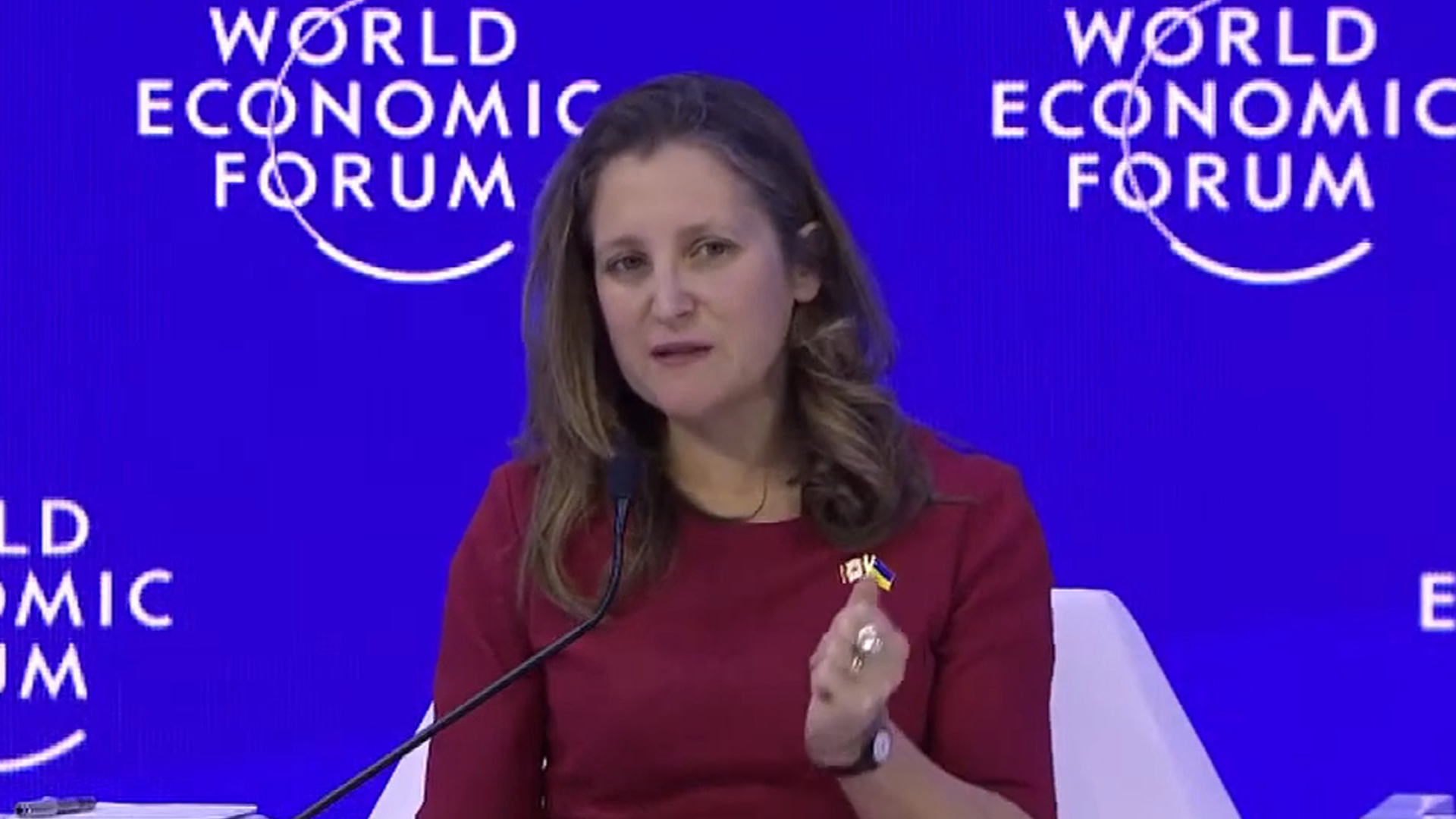 The war in Ukraine was a central topic of discussion at a panel on peace and security at the World Economic Forum (WEF) that is currently happening in Davos, Switzerland.

Freeland, who froze the bank accounts of protestors critical of her government, believes that Canadians understand that our democracy and security hinges on assisting Ukraine in the war between itself and Russia.

“These critical things are being decided upon in the battlefields of Ukraine,” she says.

"people are smarter than their leaders, certainly speaking for Canada... they understand that we need to stand up for democracy and democratic values." pic.twitter.com/sFNa2RCSvl

The situation in Ukraine apparently shows the “true strength of democracy,” even though Zelenskyy has jailed opposition, banned religions, and instituted martial law in the country for nearly a year.

“It is so important that President Zelenskyy is there; that you have millionaires, multi-millionaires and their sons and daughters in Ukraine and on the front line. This is a fight of the whole country,” says Freeland.

Deputy PM Chrystia Freeland speaks on how there's a lot to learn from the Ukraine war: "Ukraine is teaching all of us, again, the true strength of democracy." pic.twitter.com/L8MxYoac2r

Supplying Ukraine with weapons and “the money in needs to win the war” is apparently in the best self-interest of Canada. Freeland tells the audience that all G7 leaders should recognize that they have levers to help Ukraine win, “and if it happens this year… that would be a huge boost to the global economy.”

Ukraine winning its war against Russia this year “would be a huge boost to the global economy,” says Trudeau’s Deputy PM and WEF board member, Chrystia Freeland.

“Weapons are the way to peace.” he declares. “Heavier weapons and more modern weapons [are needed] because this a fight for values – for democracy – and we have to prove that democracy wins over tyranny and oppression.”

At the WEF panel on peace and security, NATO security general Stoltenberg says that weapons are the way to peace & Ukrainian democracy must prevail over tyranny and oppression

Speaking to Canadian University students last summer, President Zelenskyy notes that sometimes you must suppress democracy in order to protect it.

“In order to protect democracy and freedom sometimes you have to go fast and non-democratic but when this ends, I think this will bear good fruit,” he states.

Speaking to Canadian University students last summer, President Zelenskyy says that sometimes you have to squash democracy in order to protect it.

Believes this squashing will be fruitful when the war ends. pic.twitter.com/OlqkCqurEZ

Was there ever a time in history where leaders took away democratic rights and freedoms and willingly restored them in full?

And how out of touch is the finance minister for committing seemingly endless financial support for Ukraine when at home Canadians are facing record financial turmoil amid soaring inflationary interest rate hikes and a looming recession?