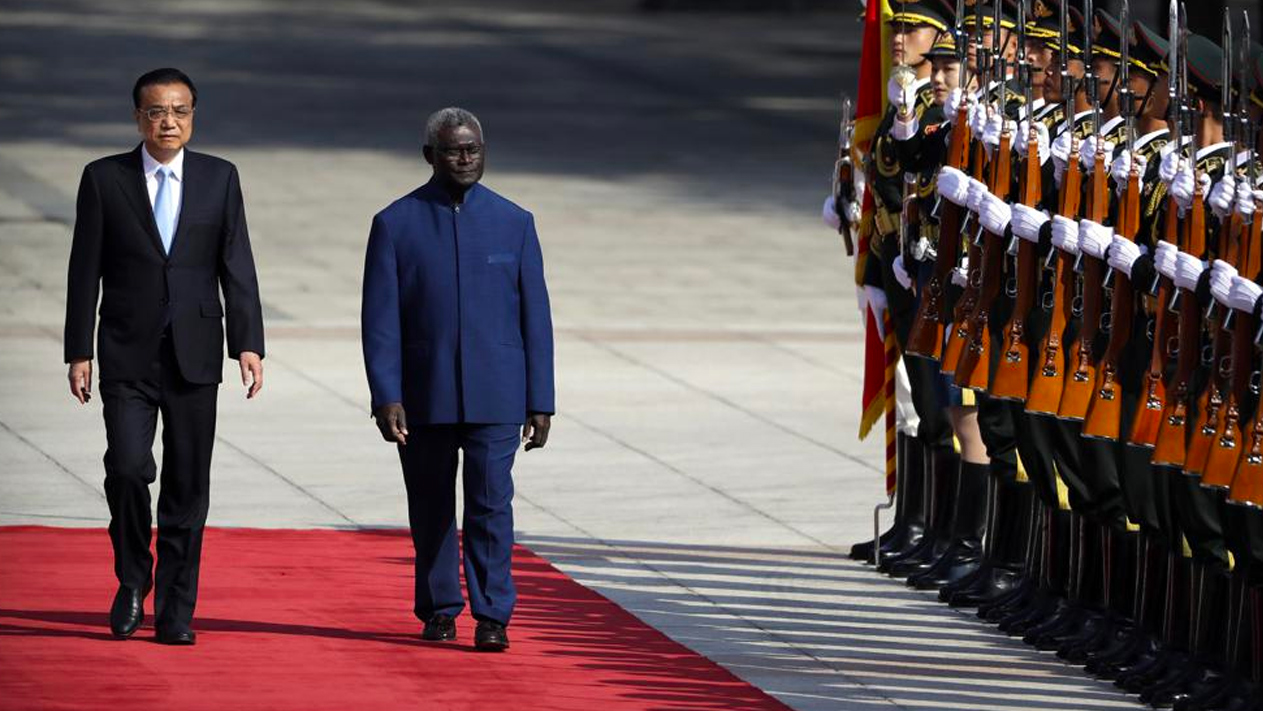 Speculation and concern has been rife since the Solomon Islands announced they would be signing a security deal with China.

Included in the deal is the stationing of Chinese military and troops for ‘domestic security’ purposes – which is understood to mean quashing the uprising from poor members of the Solomon Islands angry at the corruption and bribery of MPs that led to Chinese businessmen taking island resources from the population. The security agreement describes this as ‘Chinese troops maintaining social order’ while opposing members of the Solomon Islands see it more along the lines of securing Beijing’s interests by subverting the natural process of democracy.

Australia’s concerns centre around the agreement that appears to allow China to build a military-grade port and park warships in it, bringing the military assets of a potentially hostile communist nation uncomfortably close to the vulnerable region of which Australia is tasked with protecting.

Foreign Minister Marise Payne said that the Prime Minister of the Solomon Islands, Manasseh Sogavare, has confirmed to her that a Chinese military base will not be built. However, it is not ruled out by the security pact. Payne said that his words were a commitment to the entire Pacific.

“We have had clear indications, clear statements from the Prime Minister of the Solomon Islands that there will not be a military base constructed on Solomon Islands’ land.”

The promise is merely that – words from a government accused of taking bribes from Beijing.

Payne confirmed that there is nothing Australia can do about it as it is a sovereign decision between the Solomon Islands and China.

“The Pacific family is best placed to be the first responders on Pacific security,” added Payne.

In the modern era, China is presumed to be the greatest threat to Pacific security after they spent decades militarising reefs and atolls in contested waters, transforming bits of paradise into military bases. China has also repeatedly threatened Taiwan, engaging in a sustained campaign of hostility – economically, socially, and militarily – while threatening other Pacific nations with hot war if they defend Taiwan’s sovereignty.

“The purpose of China-Solomon security cooperation is to promote social stability and long-term peace and security in the Solomon Islands,” said Wang Wenbin, China’s Foreign Minister.

China has pursued the rich fishing waters of the Solomon Islands with plans underway to rapidly expand. A government spokesman said, “The Chinese Government was also well aware that Solomon Islands is a country with rich natural resources, and an urgent need to develop its infrastructure and also many industries and China was ready to assist.”

The Deputy Opposition Leader in the Solomons, Peter Kenilorea Junior, warned about dealing with a predatory nation like China. “We have already issues in terms of our lax immigration, lax labour laws, lax regulations, and land issues, logging issues that have come in and caused a lot of hurt socially as well without much gain. And to repeat the again at a much larger scale is something that I just don’t feel we are prepared for.”

Recent unrest in the Solomon Islands at the close of 2021 centred around the incursion of China into the region. As Payne points out, Australia was the first point of call for the Solomon Islands – unfortunately, Australia moved to quash the civilian rebellion against Beijing’s corruption, leading directly to this new security pact with China in a strategic move that has been heavily criticised and that the Prime Minister conceded had blindsighted him.

“I have known for some time the risk of a deal such as this coming about. This is why the first place I went to after the last election was the Solomon Islands,” said Scott Morrison.

In which case, it might not be ignorance of the political situation that caused Morrison to send in troops to silence the rebellion, but a misguided hope that securing the corrupt government would be enough to stop them bringing China into the fold. If so, it was a catastrophic political error and misreading of Pacific politics.

Payne clarified that while there were suspicions about China’s interests in the Solomon Islands, the firm details of a pact did not come to light until the press got hold of the leaked reports.