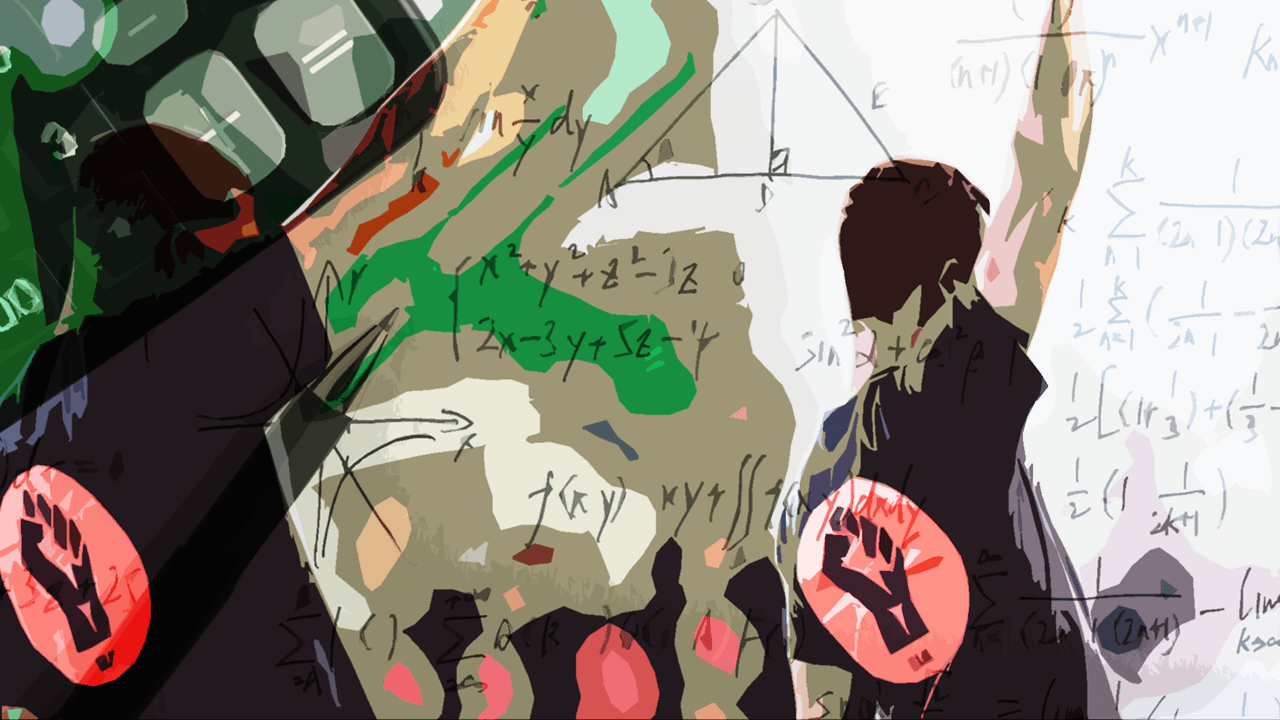 A Bill and Melinda Gates Foundation-backed effort called A Pathway to Equitable Math Instruction, aimed at students in sixth to eighth grade, claims that white supremacy is present in math classrooms and seeks to “develop an anti-racist math practice.”

“The toolkit ‘strides’ serve as multiple on-ramps for educators as they navigate the individual and collective journey from equity to anti-racism,” reads the description of the program, which offers resources for math teachers and school administrators intending to bring Critical Race Theory into their classrooms.

Rebel News found that the content developers responsible for the toolkit include a project director for the Los Angeles County Office of Education, Ruth Baskett, and a director of K-12 mathematics at the Sacramento Office of Education, David Chun, along with numerous other teachers in administrative roles throughout the country. One of the toolkit’s main contributors, Bootsie Battle-Holt, was honored with an L.A. Unified School District and L.A. County Teacher of the Year Award.

The instruction calls on math teachers to “reflect on their own biases to transform their instructional practice,” in 'Stride 1,' a text called “Dismantling Racism in Mathematics Instruction.”

“While primarily for math educators, this text advocates for a collective approach to dismantling white supremacy. This school-wide approach ensures that antiracist work is not left alone to one individual (i.e., math teacher or the director of equity), but to enlist the support and voice of all stakeholders in the school ecosystem,” the ‘how to use’ section reads.

“White supremacy culture infiltrates math classrooms in everyday teacher actions. Coupled with the beliefs that underlie these actions, they perpetuate educational harm on Black, Latinx, and multilingual students, denying them full access to the world of mathematics. The table below identifies the ways in which white supremacy shows up in math classrooms,” the text says on page 6.

These include: “The focus is on getting the ‘right’ answer,” “Independent practice is valued over teamwork or collaboration,” “‘Real-world math’ is valued over math in the real world,” “Students are tracked (Into courses/pathways and within the classroom),” and “Participating structures reinforce dominant ways of being.”

“These common practices that perpetuate white supremacy culture create and sustain institutional and systemic barriers to equity for Black, Latinx, and Multilingual students. In order to dismantle these barriers, we must identify what it means to be an antiracist math educator. In order to embody antiracist math education, teachers must engage in critical praxis that interrogates the ways in which they perpetuate white supremacy culture in their own classrooms, and develop a plan toward antiracist math education to address issues of equity for Black, Latinx, and multilingual students,” it claims.

One example of teaching anti-racism in the classrooms includes identifying white supremacy culture, which the authors claim shows up in math classrooms when students are required to “show their work.” 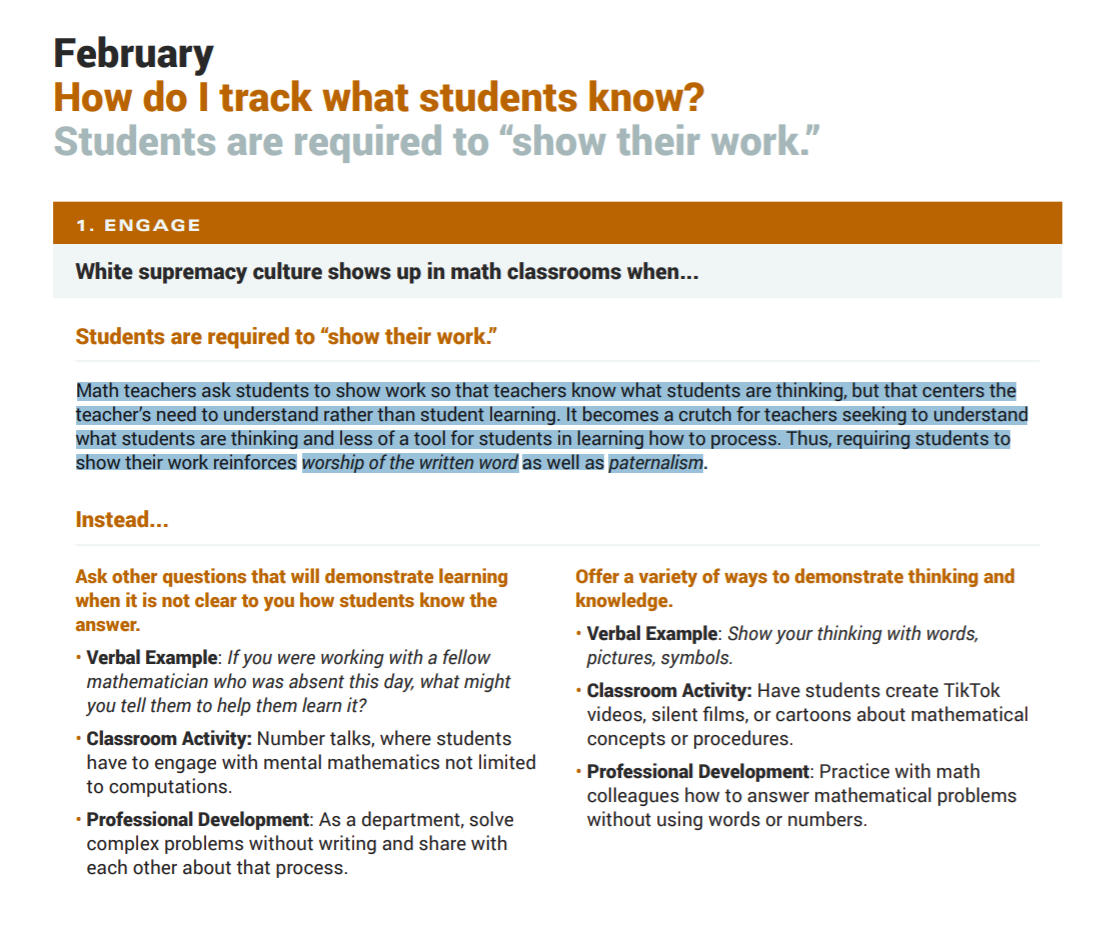 Another example condemns independent practice, which they claim is valued over teamwork or collaboration.

While there is some value in students being able to complete work independently, when this is the only or most common avenue for learning or practicing, it reinforces individualism and the notion that I’m the only one. This does not give value to collectivism and community understanding, and fosters conditions for competition and individual success, which perpetuates the idea that if a student is failing it is because they are not trying hard enough or that they don’t care. 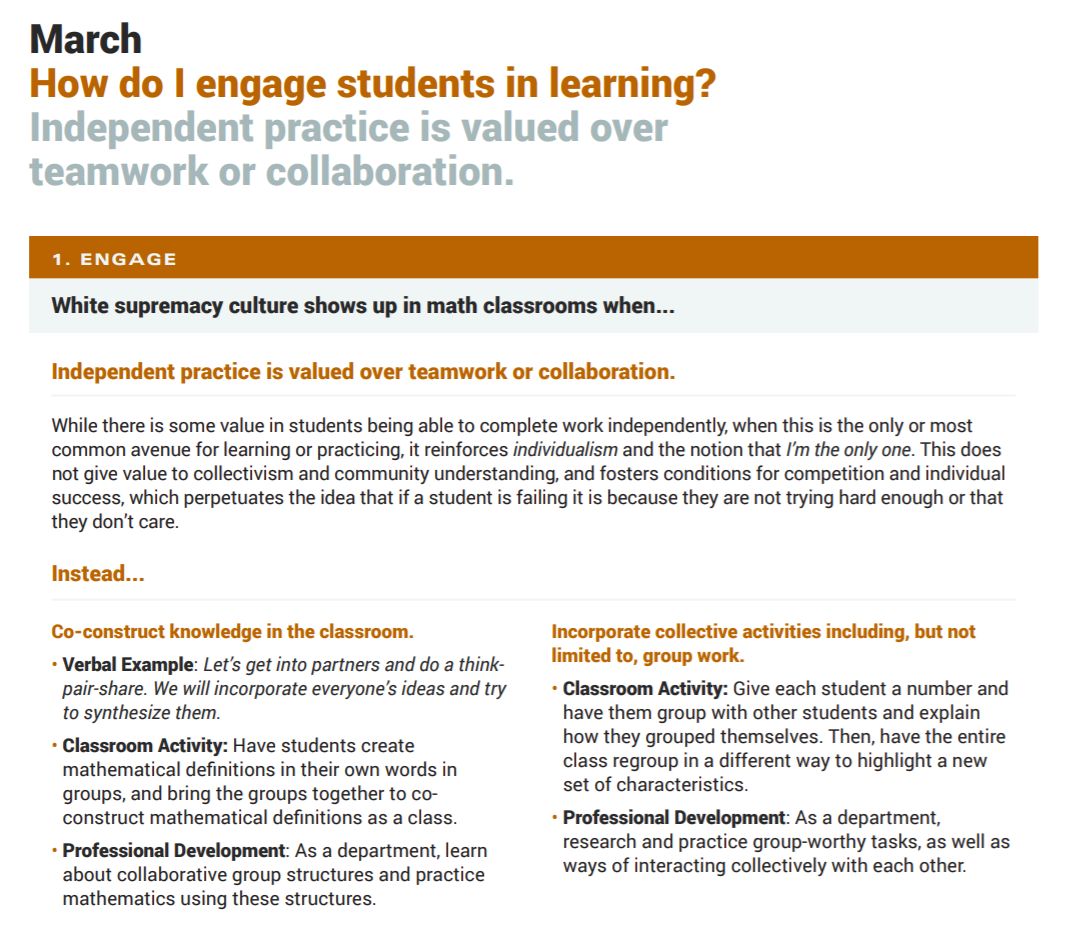 The document claims that white supremacy culture shows up when teachers put the focus on getting the “right” answer, claiming that the concept of mathematics being purely objective is “unequivocally false,” and teaching it is even much less so.

“Upholding the idea that there are always right and wrong answers perpetuate objectivity as well as fear of open conflict,” it claims. 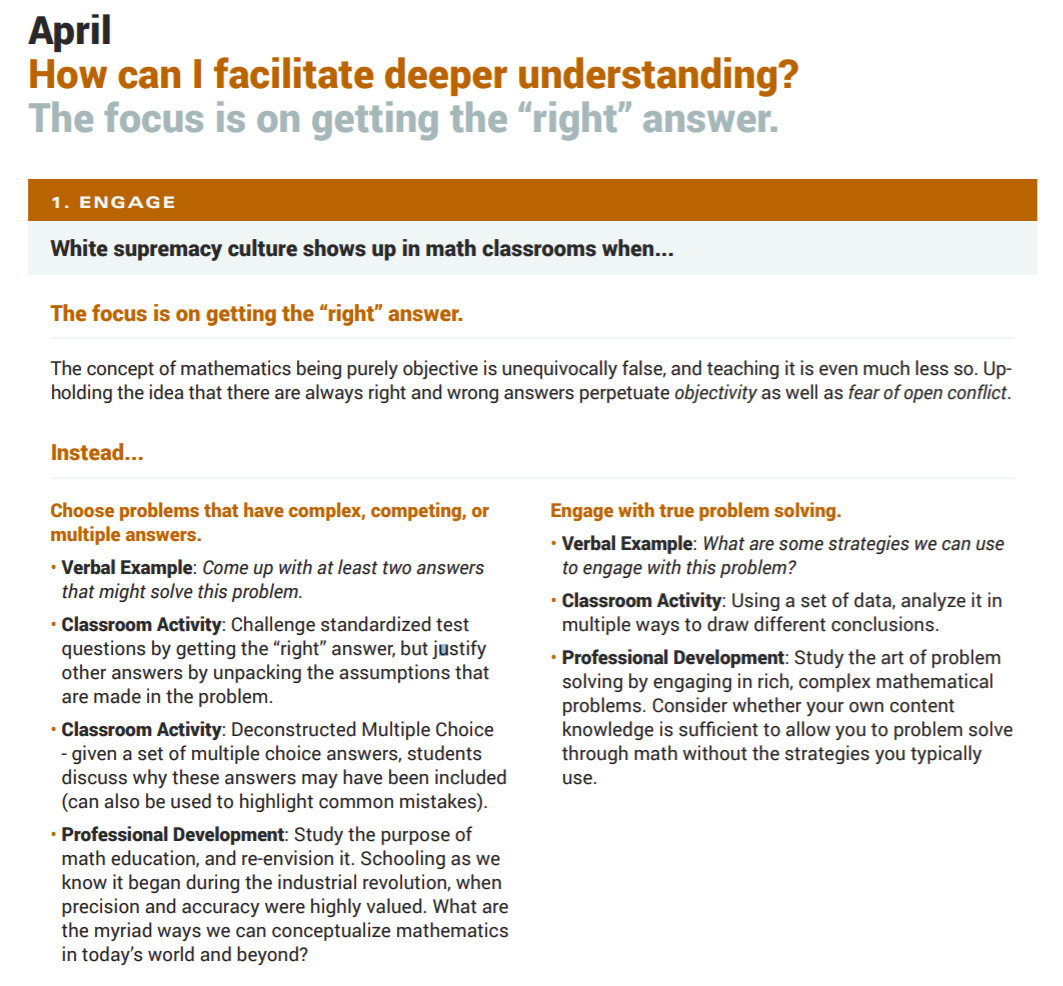 Effectively, the math instructors claim that objectivity is an aspect of white supremacy.

Efforts to push equitable math instruction have spread across the United States, with schools in Oregon, Washington and California adopting the practice.

Fox News reports that the Oregon Department of Education recently called upon teachers to register for training that encourages “ethnomathematics,” which, as previously explained, claims that white supremacy manifests itself in objectivity.

They have been joined by schools in Seattle, which proposed a new math curriculum that teaches how “Western Math” is used as a tool of power and oppression, the Hoover Institution at Stanford University reports. 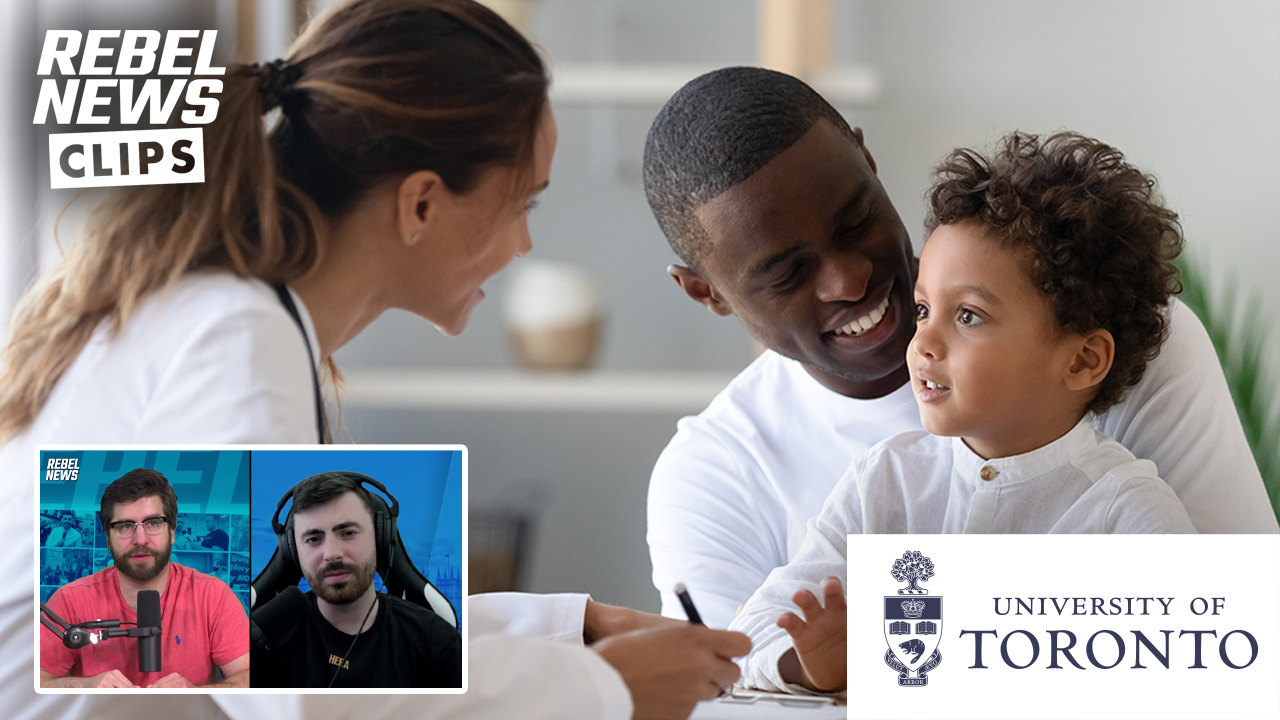