Ezra Levant: 'If you disagree with Trudeau and his policies, you are obviously a bigoted extremist'

'He was criticizing Justin Trudeau, I know, it’s shocking,' said Ezra. 'Someone made fun of dear leader, someone mocked the Precious.'

"Someone made fun of Dear Leader. Someone mocked the precious," said Ezra. "Here's how the government journalists at the CBC state broadcaster reported this crisis, this scandal. 'B.C. Mounties anti Trudeau website raises concerns about discriminatory views within the RCMP.' I mean, right there. That's gorgeous already, isn't it? They call him a B.C. Mountie, and he is. But his comments were not made in that capacity."

Ezra added that "the headline leads you to think that they were. They call the website anti Trudeau, which is accurate. But then they call that discriminatory because you see, if you disagree with Trudeau and his policies, you are obviously a bigoted extremist."

Then there is Brady Strachan, Trudeau’s journalist, spreading anti-Trump misinformation and hoaxes, and that’s fine, maybe he’s not that smart to see through scams, but now that the scammer confessed, why hasn’t Strachan tweeted an update or taken down the lie?

Well, because he’s not a journalist, he’s a Trudeau propagandist. Anyways just a briefing on who he is. Let’s read the story. Or part of it — it’s massive, it’s a full-on character assassination piece:

Well, we can’t have anyone poking fun at things, can we?

And then they have a picture, which looks like it’s poking fun. That’s the worst. 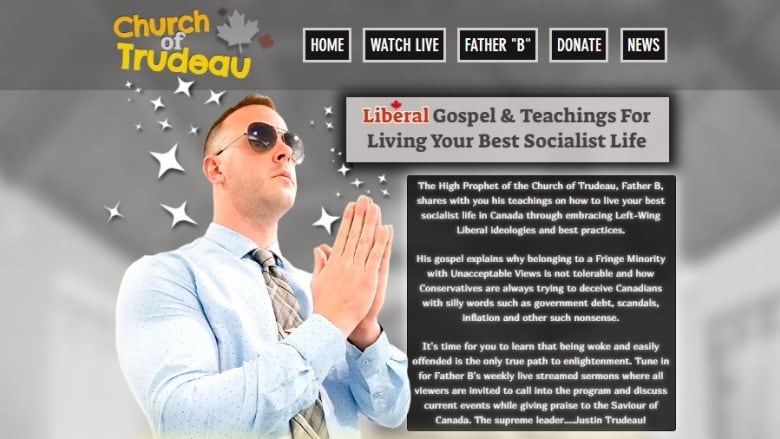 The RCMP are investigating after a police officer in Trail, B.C., launched a satirical, political website called the Church of Trudeau mocking the Prime Minister and funding of Indigenous and LGBTQ+ communities.

And they have the website, churchoftrudeau.org which sounds funny. But if you go there, you will see that it’s been taken down. Another great free speech moment brought to you by Trudeau’s enforcers at the CBC.

But there’s something called the Wayback machine, that takes snapshots of every page on the internet and archives them. Here’s what the site looked like before it was nuked. It reads:

Liberal Gospel & Teachings For Living Your Best Socialist Life: The High Prophet of the Church of Trudeau, Father B, shares with you his teachings on how to live your best socialist life in Canada through embracing Left-Wing Liberal ideologies and best practices.

And it goes on like that. It’s not rude; it’s not one of those F Trudeau things. It’s a satire – I think – I mean, maybe he means it.