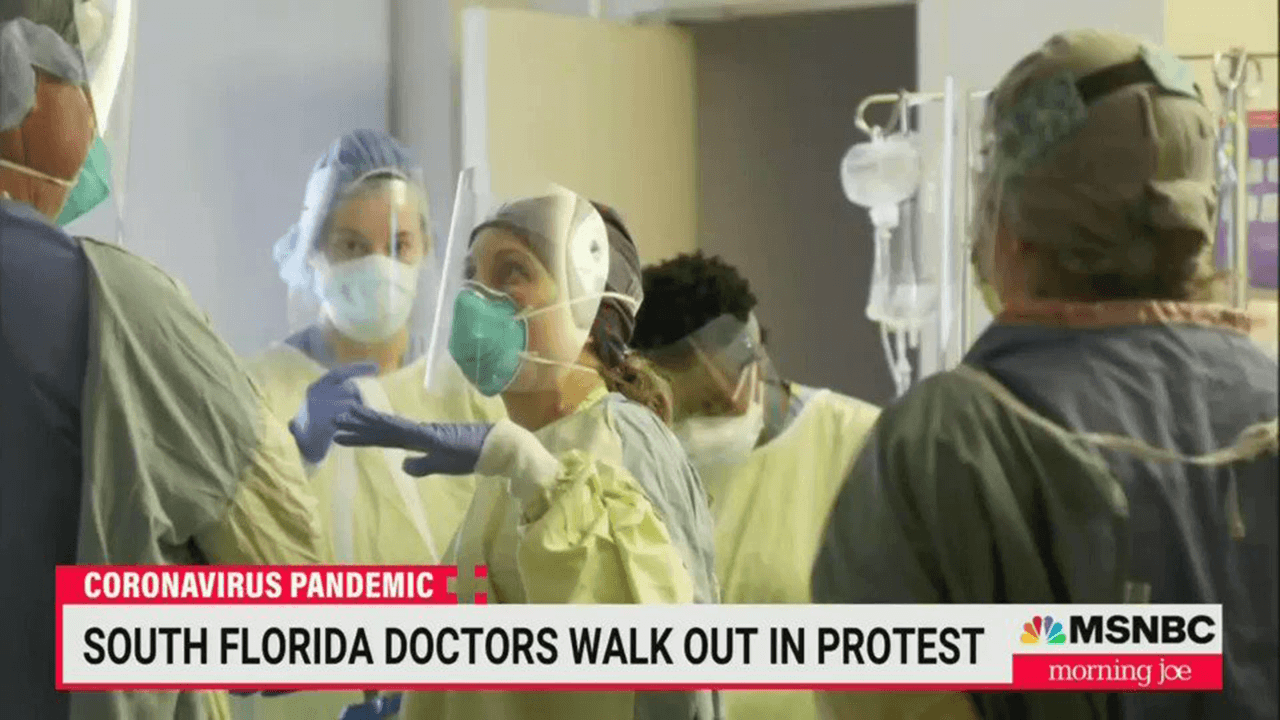 More than 75 doctors at a South Florida hospital have walked out in protest over the rising cases of COVID-19 and the refusal of some patients to get vaccinated, in a stunt that has been amplified by Occupy Democrats, MeidasTouch and other Democrat-run organizations on social media.

“Just moments ago, more than 75 doctors staged a walkout to protest the number of Covid patients coming to the hospitals who have not been vaccinated,” host Joe Scarborough said on MSNBC’s Morning Joe on early Monday.

The Morning Joe crew’s Jerry Sanders went live for the protest, given advance notice by the protesting doctors who opted to neglect their duties to make a political statement.

“What Americans don’t understand is for every unvaccinated person that is filling up an ICU bed, that means, with the hospitals jammed, somebody with a heart attack, and I’ve known somebody in this position, goes there, has trouble getting in, can’t get treatment, can’t get a bed, it is a nightmare for the doctors, it is a nightmare for the nurses,” Scarborough said. “And to the doctor’s point-of-view, it’s worse yet for sick people that want help from them.”

“That is truly reflective of the frustration that you see behind me and these doctors have gathered, some coming off their shift to come out here, gathering to try to tell people, ‘please, first of all, ignore the nonsense and the absurdities you are hearing people say at public meetings’,” Sanders said. “And recognize the value of what a vaccine will do.”

“85% of the ICU beds in Florida are full,” Sanders claimed. “Now, there are some hospitals that have no space in the ICU. They’ve turned cafeterias, they’ve turned conference centers, over to beds to house patients, because they are so overwhelmed,” Sanders said, reporting from the scene.

A doctor who spoke with the MSNBC crew, Dr. J.T. Snarski, expressed frustration with the number of patients who were overwhelmingly unvaccinated.

“It’s incredibly frustrating,” Snarski said. “Because we know vaccines are safe and effective. And it’s people who go out and talk against them that really go against physicians and medicine and science. And it’s not the message we want to get across to people. Vaccines are safe and we need to get our communities vaccinated.”

The doctors’ protest comes amid a nationwide effort to paint Florida Gov. Ron DeSantis as an anti-vaxxer, despite having taken the vaccine himself and pushed a state-wide vaccine drive. Florida boasts a 66% vaccination rate of those over the age of 12, well above many other states.

DeSantis's press secretary, Christina Pushaw, pushed back on characterization of the doctors' press conference as a walkout, saying, "These doctors went outside for a few minutes this morning, NOT to “go on strike” — but to urge people to get vaccinated to avoid hospitalization."

FACT CHECK: South Florida has a very high vaccination rate & hospitals do have the capacity to treat patients. These doctors went outside for a few minutes this morning, NOT to “go on strike” — but to urge people to get vaccinated to avoid hospitalization. https://t.co/xFPWwmfMmC

Earlier this month, DeSantis said that he expected hospitalizations to decline, reiterating his understanding that the virus is seasonal in nature.

“This is helping reduce dramatically, mortality, particularly among our most vulnerable residents,” he said, according to an Epoch Times report. “You can still test positive, I think we’re seeing that. But at the end of the day, really turning this in from something that was much more threatening to say, a senior citizen, to something that is more manageable. That’s a huge, huge thing.”