The 'problematic' statue will find a new home in Medora, North Dakota 'where it will eventually be displayed at the new Theodore Roosevelt Presidential Library — located near Roosevelt’s former Badlands cattle ranches — as a long-term loan from the City of New York.' 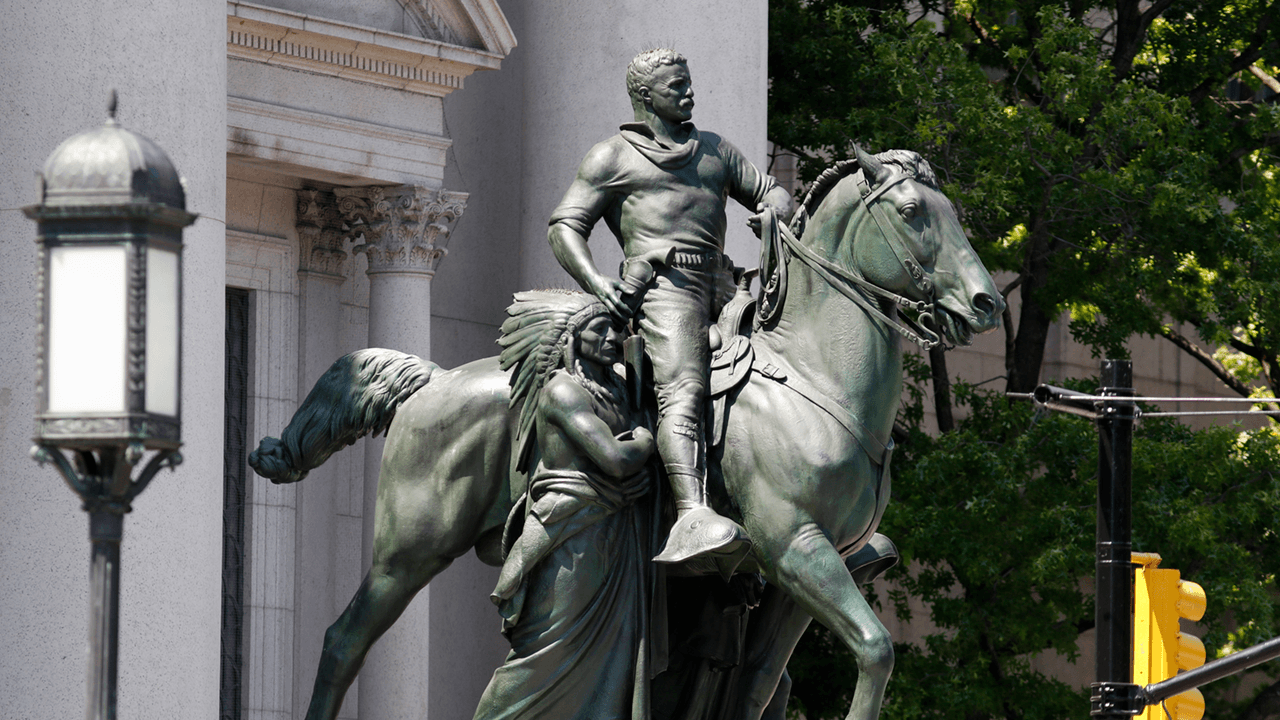 The statue of Theodore Roosevelt is set for removal from New York City’s Museum of Natural History to North Dakota, following complaints that the depictions of Roosevelt, which features African and Native American figures appearing “to hold subservient positions” next to the former president, became the site of racial justice protests in 2020.

The statue, named The Equestrian Statue, was previously protested in the 1970s with the rise of the anti-war movement, which opposed Teddy Roosevelt’s aggressive foreign policy and occasional military intervention.

The decision to move the Roosevelt statue came in June when the Public Design Commission approved its relocation. Last Friday, the commission announced that it would be moved to North Dakota.

The New York Times reported that the “problematic” statue will find a new home in Medora, North Dakota "where it will eventually be displayed at the new Theodore Roosevelt Presidential Library — located near Roosevelt’s former Badlands cattle ranches — as a long-term loan from the City of New York."

“The Theodore Roosevelt Presidential Library … today announced that it has entered into an agreement with the City of New York for the longterm loan and reconsideration of the Equestrian Statue designed by James Earle Fraser, which was commissioned by the Board of Trustees of the New York State Roosevelt Memorial in 1929 and has stood on the steps of the American Museum of Natural History in New York City since 1940,” the The Theodore Roosevelt Presidential Library Foundation announced in a statement.

The statement added that the reason for the relocation was because it was “problematic” and lacked “consent and context.”

“The board of the TR Library believes the Equestrian Statue is problematic in its composition. Moreover, its current location denies passersby consent and context. The agreement with the City allows the TR Library to relocate the statue for storage while considering a display that would enable it to serve as an important tool to study the nation’s past.”

“With the support of members of the Roosevelt family, the TR Library will establish an Advisory Council composed of representatives of the Indigenous Tribal and Black communities, historians, scholars, and artists to guide the recontextualization of the statue.”

“The Equestrian Statue is problematic in its hierarchical depiction of its subjects and should be removed from New York State’s official memorial to Theodore Roosevelt,” said Theodore Roosevelt V, the great-grandson of the former president, who contributed to the statement.

“Rather than burying a troubling work of art, we ought to learn from it,” he added “It is fitting that the statue is being relocated to a place where its composition can be recontextualized to facilitate difficult, complex, and inclusive discussions.”

"The world needs Theodore Roosevelt now more than ever," said the library’s chief executive, Edward O'Keefe, in a statement on Friday, “Museums are supposed to do hard things. Our job is to forthrightly examine history to understand the present and make a better future.”

In 2020, the statue was defaced several times as supporters of the growing Black Lives Matter movement sought to pull down historical statues and destroy monuments over claims of colonialism and racism. Efforts to tear down statues have continued since the height of the protests last year.

In July, Rebel News reported on the tearing down of Queen Victoria and Queen Elizabeth II statues in Manitoba.