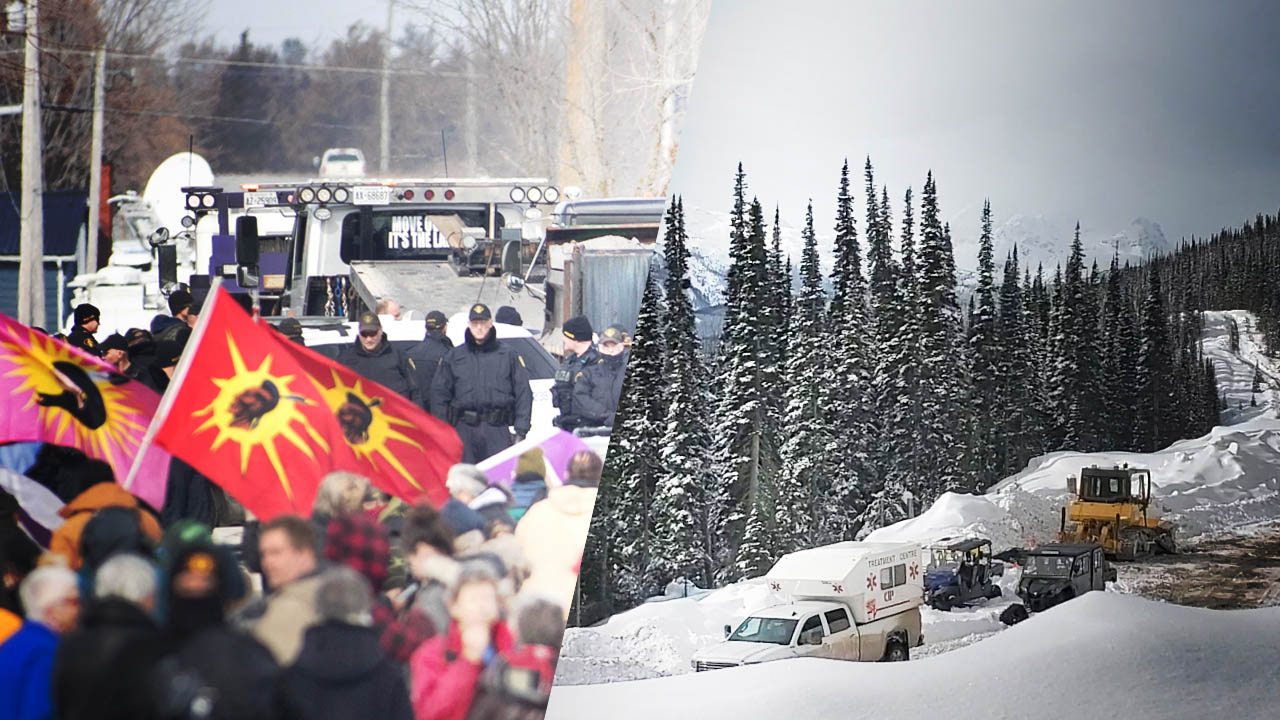 March 5, 2020 — I was in British Columbia covering the construction of the GasLink pipeline and the protests surrounding it when news broke of a train derailment in central B.C. It's "only a matter of time" before another Lac-Megantic tragedy.

Delivering donuts to Coastal GasLink workers: How they preserve environment while laying pipeline

March 5, 2020 — I travelled nearly 100 kilometres through the British Columbian bush to get to the actual area where Coastal GasLink is laying down pipe.

March 5, 2020 — There are several checkpoints on the way up to the Coastal GasLink worksite in British Columbia. Some of them are managed by TC Energy, but other checkpoints of a very different kind are being managed by the Office of the Wet’suwet’en, a radical group of foreign-funded activists.

March 4, 2020 — Prime Minister Justin Trudeau's deal with Wet'suwet'en 'Chief Woos' is secret — there will be no public details until the agreement has been signed, Keean Bexte reports.

Challenging Wet'suwet'en Chief Woos: Why did you steal your title?

March 3, 2020 — Frank Alec of the Wet'suwet'en First Nations is currently sitting across the table from Minister Carolyn Bennett, negotiating the specifics of the $6.6 billion Coastal GasLink pipeline. You may have heard about this “deal”. But who is Frank Alec? Well, he claims to be Chief Woos, a title traditionally held by revered matriarchs of the Wet'suwet'en.

March 3, 2020 — On last night's episode of The Ezra Levant Show, we looked at the original story of Frank Alec, aka Chief Woos, a self-promoting 'hereditary chief' of the Wet'suwet'en tribe.

February 27, 2020 — A First Nations couple weighs in on the anti-pipeline rail blockades — and guess who they blame?

Blockade Diary: Behind the lines in Tyendinaga | David Menzies

February 25, 2020 — Rebel News once again ventured out to the rail blockade at Tyendinaga, Ontario, just east of Belleville. Our story begins late Sunday night, in which protesters were offered a sweet deal by law enforcement: namely, simply vacate the railway lands and no charges of any kind would be laid.

Indigenous blockade “the only card left to play” | Keean Bexte

February 23, 2020 — Contrary to reports saying the RCMP have retreated out of the Crown Land west of Houston, British Columbia, they remain on active duty patrolling the roadway ensuring remains clear.

February 22, 2020 — At a recent press conference, Wet’suwet’en hereditary chief Woos said there can be no more negotiations with the federal government pertaining to the rail blockades until the RCMP completely leave Wet’suwet’en territory and that work on the Coastal GasLink project is halted.

February 21, 2020 — In Tyendinaga Township, lawlessness has taken lease and has actually reached new levels. Today, I paid another visit to the ongoing railroad blockades near Belleville, Ontario.

February 21, 2020 — On last night's episode of The Ezra Levant Show, we covered the response to the Alberta men who broke down and hauled off one of the makeshift blockades stalling a railway near Edmonton.

February 19, 2020 — On last night's episode of The Ezra Levant Show, Canada Strong and Proud founder Aaron Gunn talked about the “general lawlessness” across British Columbia due to various blockades.

February 15, 2020 — At the rail blockade in Tyendinaga, Ontario, just east of Belleville, law enforcement was finally given the green light to descend upon the CN rail line and shut down the protest against the Coastal GasLink pipeline project.

Robbie Picard on the illegal blockades: Why would you invest in Canada? | Ezra Levant

February 15, 2020 — On a recent episode of The Ezra Levant Show, Robbie Picard from Oilsands Strong joined Ezra to talk about the ongoing blockades stopping traffic through major Canadian corridors.

February 14, 2020 — Anti-oil protests are putting thousands of Canadian jobs at risk and the Trudeau Liberals are ready to negotiate with the lawless mob holding the country for ransom, Sheila Gunn Reid reports.

February 13, 2020 — Amid widespread resentment for the perpetrators of the nationwide blockades that Canadians are going through, the K’òmoks First Nation is distancing themselves from protesters who they say are using their name to raise trouble. The First Nation has received backlash after non-indigenous activists blocked the Inland Island Highway.

February 13, 2020 — Rebel News recently visited the level train crossing that has attracted a handful of picketers near Belleville, Ont. They are ostensibly protesting the Coastal Gaslink natural gas pipeline project in British Columbia, which most natives support!