As the saying goes, the camera never lies — but NBC News sure does.

So, what do GM pickup trucks and a certain transgendered swimmer have in common? Well, in both cases, NBC News has taken liberties when it comes to telling the truth, the whole truth and nothing but the truth…

Check out this photo of Liar — er, I mean, Lia — Thomas in this NBC News feed: 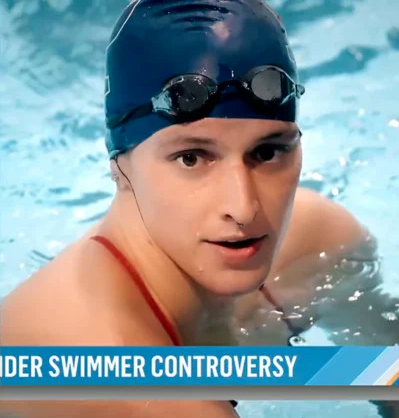 Wow, Lia is really transgendering nicely, isn’t he? Look at that creamy, complexion, that soft, smooth skin. Is this dude using a certain dishwashing liquid?

Ah, but here’s the thing, folks. Lia’s not using Palmolive or Oil of Olay or any number of lotions and potions designed to make skin silky-smooth. Rather, that complexion is the result of NBC using… Photoshop?

Oh yeah. Here, check out the actual photo that was submitted: 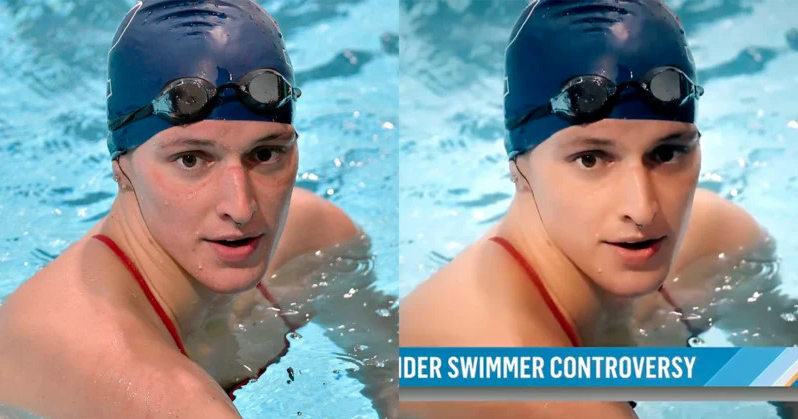 Looks a little less feminine and a tad more masculine, wouldn’t you say… maybe because when it comes to gender, Lia Thomas is… well, I think Austin Powers put it best.

As the saying goes, the camera never lies. But NBC News sure does. Alas, a transgendered male-to-female athlete that looks quite manly doesn’t fit into the narrative of the woke-joke journalists in the mainstream media that trans women are real women — even though real-real women are getting slaughtered in the pool by this grifter. So it is, that the folks at NBC News took it upon themselves to transform the real photo of Lia into a fake photo of Lia. Transgender, transform, trans fats  — hey, it’s all the same, right?

Now, at time of taping, NBC had yet to apologize for the photo fakery. And I did reach out to the media relations department of NBC News with some questions, but nobody has gotten back to me. No surprise there, really. The mainstream media love to intrude into the lives of individuals on the proviso that “the public has the right to know!” But when the tables are turned, and when the MSM is taken to task, suddenly they retreat, turtle, and embrace “no comment, no comment.”

But here’s the thing, folks: if there is one news organization on the planet that should be super sensitive when it comes to faking it, it is surely NBC News.

Let’s dial back the clock to November 1992. The NBC News program, Dateline, thought they had a real scoop on their hands. You see, there were reports of pickup trucks made by General Motors having a design flaw that resulted in those pickups exploding. NBC decided to put this to the test. Here’s an excerpt of their now infamous report. That was dramatic, wasn’t it? And quite frightening, too. What’s more, would you buy a GM pickup truck knowing that if you ever got T-boned, your vehicle, would, well, in the words of Billy Saul Hurok and Big Jim McBob: "get blowed up real good".

No, I sure wouldn’t buy a GM pickup truck that acted like a next-generation Ford Pinto upon impact. But, alas and alack, there was just one teeny tiny little wee problem with NBC’s report.

You see, try as they might, NBC News could NOT get those GM pickup trucks to blow up when enduring a side-impact. Thus, embracing the mantra of “don’t let the facts get in the way of a good story”, NBC decided to, you know, grease the wheels a bit to get those much sought-after Ka-Boom visuals. Which is to say, they secretly affixed incendiary devices on those gas tanks. No, I swear to God, folks: these “journalists” had their henchmen put little bombs on those gas tanks to make those trucks blow up real good. Hard hitting news suddenly morphed into paperback fiction; in fact, I would say the smear tactics NBC used to demonize GM 30 years ago might be the great granddaddy of what we now refer to as “fake news.”

And the thing is, NBC News might’ve gotten away with this scam if it were not for a fireman on the set who was so disgusted by the chicanery that he contacted GM and spilled the beans. And the General quickly – and justifiably – proceeded with a defamation lawsuit. That lawsuit would eventually be settled out of court for an undisclosed amount. But here’s the subsequent mea culpa that aired courtesy of co-anchors Jane Pauley and Stone Phillips.

Oh, and Stone Phillips also went on to say this: “We apologize to our viewers and to General Motors. We have also concluded that unscientific demonstrations should have no place in hard news stories at NBC. That’s our new policy.”

Yeah… “unscientific demonstrations should have no place in hard news stories at NBC” eh? That’s the “new policy”, huh?

Well, I guess that was then and this is now given the most recent tinkering scandal involving Lia Thomas in which NBC News gave Lia the digitized beauty parlour treatment to make a "He" look more like a "She".

By the way, when it comes to photoshop chicanery, it should be noted that while the mainstream media will beautify its allies, it will also digitally demonize its enemies.

Case in point, remember this doctored footage courtesy of a Fox affiliate in Seattle? On the right is the actual image of Donald Trump; on the left is an altered and orange-fied image of the President with his tongue sticking out – the way Justin Trudeau does when he dons blackface.

Thankfully, that editor was justifiably given the boot. As for NBC News? Well, it's still crickets regarding their falsification regarding their journalistic jabronism. But why?

Bottom line: as the old saying goes, those who do not learn from history are doomed to repeat it. And if NBC News reporters and others in the mainstream media ponder why it is that a growing number of people refer to their reportage as “fake news”, well, guys and gals and others  — you need only look in the mirror.