A 70% vaccination rate unlocks NSW for the double-jabbed. 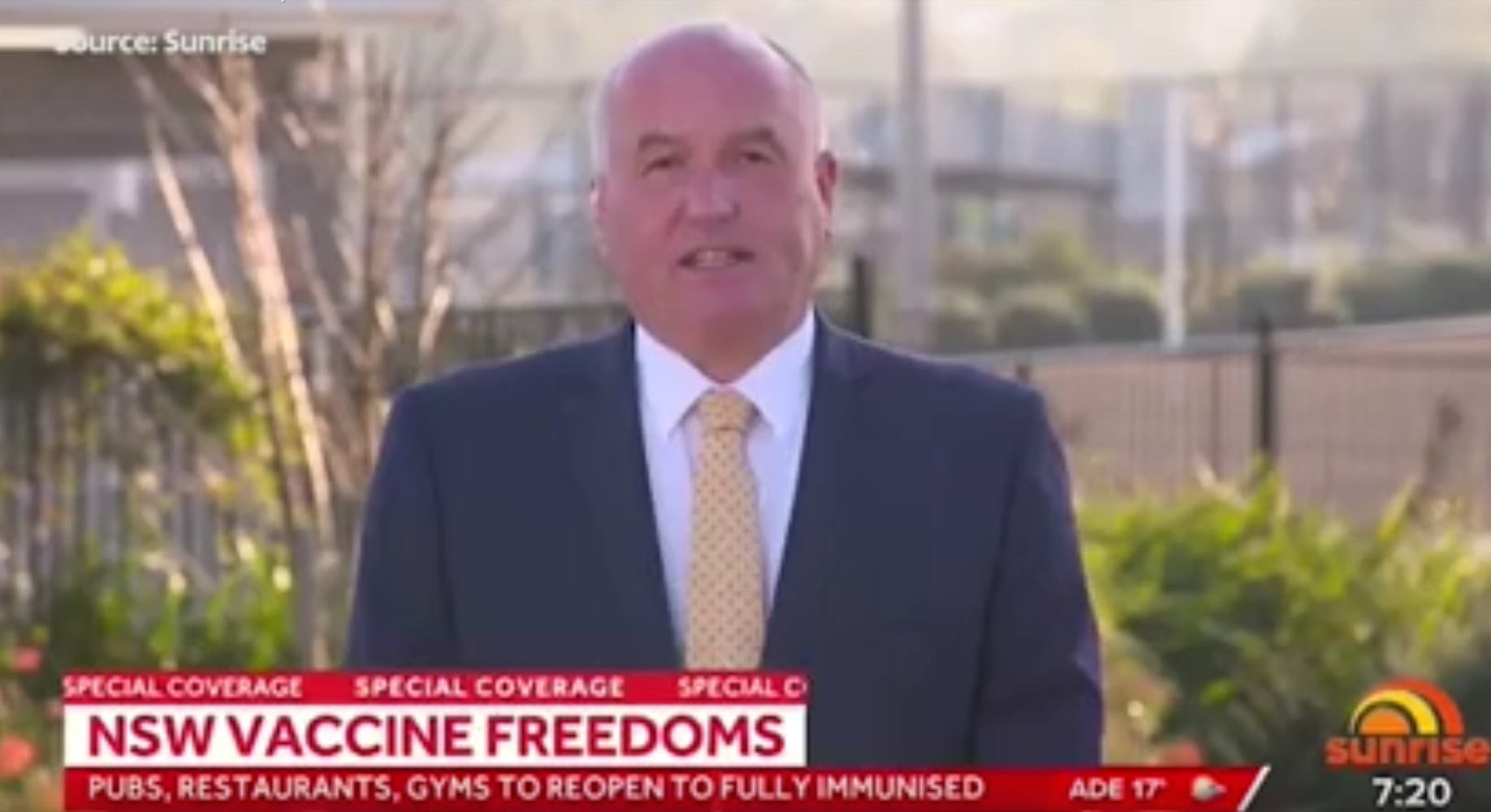 This comes along with the controversial news that bars, clubs, pubs, restaurants, and gyms will require vaccine passports as a condition of entry.

Venues would only be allowed to admit customers who could produce a commonwealth-assigned vaccination certificate synchronised with Medicare records.

“It makes sense, it makes perfect sense, it’s exactly what the British government has done,” Elliott told Sunrise on Friday morning. “This is something that a lot of people have been working very hard towards.”

Domestic vaccine passports have been the cause of major protests overseas. Crowds have been gathering every few days in European capitals to protest governments that attempt any form of medical segregation.

“We’ve got to make sure that we continue urging people to get the vaccine – and I can tell you that as member for a western Sydney electorate, the best way to motivate my constituents to get the vaccine is to tell them they’ll be able to go to the pub soon,” continued Elliott.

This comes despite Prime Minister Scott Morrison previously promising Australians that they would be offered incentives – not punishments – when it came to taking the vaccine.

At 70% vaccination, only those who are double vaccinated will be able to attend bars/restaurants/gym.

He calls it a '#FreedomPlan'

The bizarrely named ‘Freedom Plan’ for NSW includes the creation of a two-tiered system of citizens based on their vaccination status. It has not been signed off by NSW Premier Gladys Berejiklian and remains under review with a decision expected within two weeks.

Currently, the ‘Freedom Plan’ hints that after an 80% rate is reached, unvaccinated people would be allowed the same freedom.

“When we get to six million jabs, those that are vaccinated will have the opportunity to do something that they can’t do now,” added Berejiklian.

Premier Gladys Berejiklian hints and what privileges those who are fully vaccinated could enjoy once August ends! #KJshow #GladysBerejiklian #SydneyLockdown pic.twitter.com/jn0gMuhvLN

With cases continuing to rise, it is expected that NSW will remain under full lockdown until the end of September, although some ministers have suggested it may extend to Christmas.

After roughly seven weeks, the Delta variant is now at its highest number of cases. In response, a Melbourne-style curfew has been issued in some LGAs. Additional restrictions announced this morning include mandatory 14 day self-isolation and a fine for entering an LGA of concern without a 'reasonable' excuse. Police will also be to put apartment buildings in lockdown.

#BREAKING: NSW Police have been granted more powers as the state battles the Delta #COVID19nsw outbreak.

New powers include issuing stay at home orders and heightened restrictions in the LGAs of concern. #auspol #COVID19au pic.twitter.com/4b0alHOj0F

The government’s roadmap for reopening makes it clear that vaccine uptake – at least on paper – is the only key to unlock the state.

Of these locally acquired cases, 134 are linked to a known case or cluster – 107 are household contacts and 27 are close contacts – and the source of infection for 508 cases is under investigation. pic.twitter.com/cdIcVbmw2p

There has been no official comment yet on what effect, if any, the information coming out of Israel and Iceland will have on the ‘Freedom Plan’.

These nations attained some of the highest vaccination numbers in the world, but they have both experienced a new wave of infection with the Delta strain.

“This is a very clear warning sign for the rest of world. If it can happen here, it can probably happen everywhere,” said Ran Balicer, the Chief Innovation Officer at Clalit health Services - Israel's largest health maintenance organisation.

A preprint report published by Tal Patalon  found that, 'people vaccinated in January had a 2.26 times greater risk for a breakthrough infection than those vaccinated in April'. This has prompted Israel to begin a vaccine booster program.