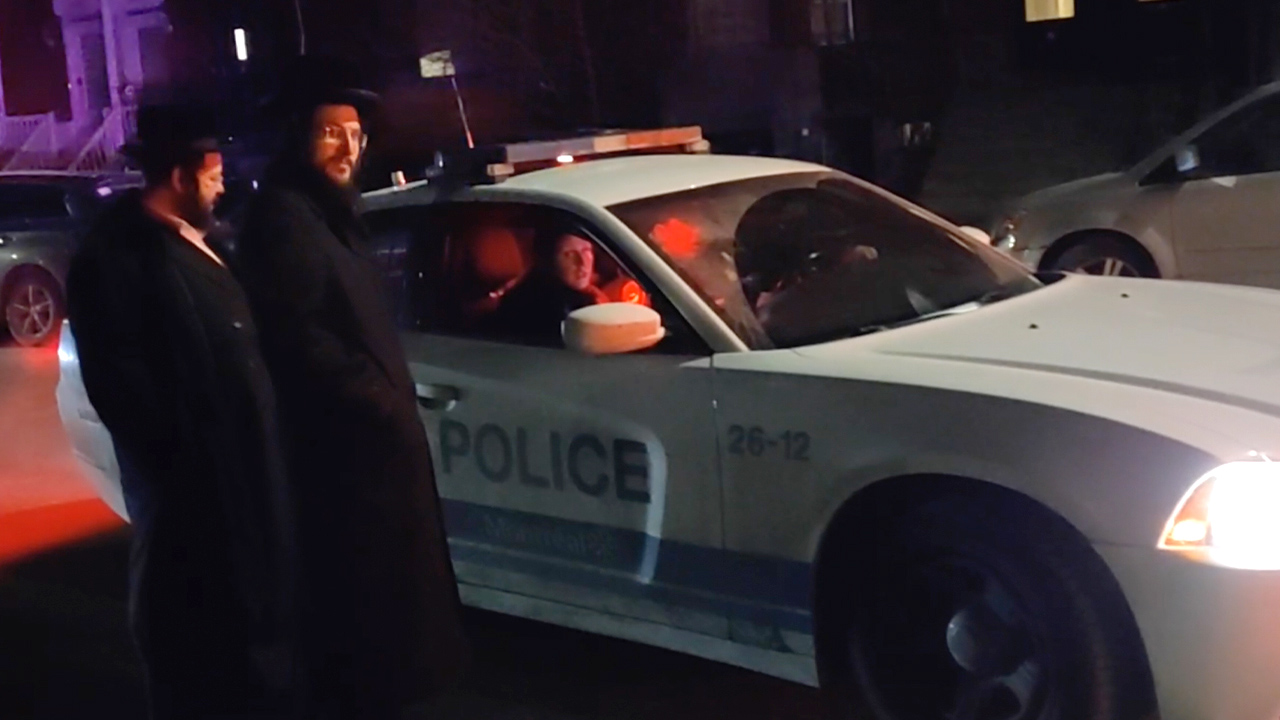 Police had another busy night in Montreal, Quebec as they continued enforcing COVID-19 curfew measures in La Belle Province.

Yaakov Pollak was back on the streets after hours documenting the police enforcement yet again, despite receiving pushback for doing so from officers he encountered yesterday (and having already been charged in the past).

Despite the large scale protest against COVID-19 restrictions in Quebec on the weekend, and a legal challenge put forward by Montreal's Orthodox Jewish community, the curfew has remained in place.

At one point after the curfew had begun, Montreal police gathered several cars around a Jewish library in the city.

Last night Montreal police decided to surround a Jewish library after a while they left.

Two Orthodox Jewish men were stopped and questioned by an officer in a cruiser, although they were allowed to leave without issue after presenting valid exemptions.

These two people had an exemption note they were let go.

Another two, who identified themselves as students, were not so fortunate. “We are students coming home from class, these two officers are giving us tickets,” one of the men tells Pollak as he approaches.

These two people say they were stopped and ticketed while walking home from night classes.

One person detained by police told Pollak he was put in the back of a cruiser because the officers thought he might attempt to flee while checking his paperwork.

This kid says he was put in the back of a police car because they said he might run away while they are checking his papers.

Montreal police continued to defy their own directive which deems media an essential service, yet again issuing Pollak a ticket for violating the curfew.

I believe that the @SPVM is trying to intimidate me so I stop reporting the curfew live from Montreal, Quebec for @RebelNewsOnline.

if you received a ticket go to https://t.co/9MjpXyHUaA.

See you in court! pic.twitter.com/M30ry3d17N

“You're going to get another one today,” an officer tells Pollak, referring to the previous charges police have laid. “You're not exempt,” another informs him.

“We'll see you in court,” Pollak says. “I have an email from the SVPM [stating that] I'm exempt and I will continue going out.”

Being stopped a handful of times, Pollak might have managed to receive two charges in one night. “You've got to go home,” the police tell Pollak.

I was stopped 4-5 times tonight by police got 1-2 tickets (one might be in the mail) while reporting for @RebelNewsOnline in Montreal, Quebec.

Another officer wondered why Pollak was still on the street, despite asking him to go home. “Because I'm media, I'm essential, I'll stay out,” Pollak answers. The officer then threatens to ticket Pollak if he steps onto the street to continue their discussion.

The months long curfew may soon be eased according by Premier Francois Legault, with experts suggesting that Quebecers are becoming less inclined to abide by restrictions as days get longer.