'I deem it necessary to make a decision that should have been made long ago,' Putin said. 'I am confident I will have the support of the people of Russia.' 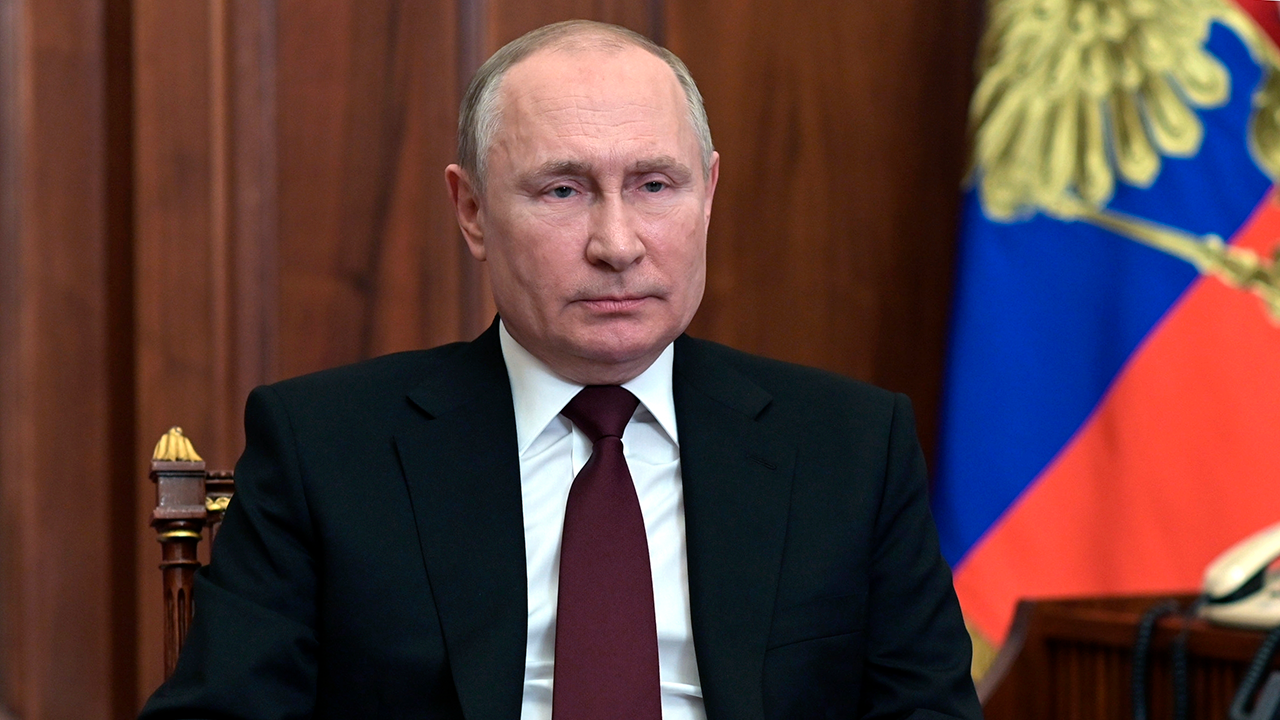 Russian President Vladimir Putin announced Monday that Russia is set to recognize the independence of the Donetsk People’s Republic and Luhansk People’s Republic, the two breakaway regions in eastern Ukraine where separatists have been engaged in low-scale warfare for almost a decade.

The Russian leader ordered troops to descend on eastern Ukraine for “peacekeeping functions” following the declaration.

“Today, the leadership of the [Donetsk People’s Republic] and [Luhansk People’s Republic] received appeals to recognize their sovereignty in connection with the military aggression of the Ukrainian authorities, massive shelling of the territory of Donbas, as a result of which the civilian population suffers,” the Kremlin said in a press statement. “With all this in mind, the president of Russia said that he intended to sign a corresponding decree in the near future.”

During a lengthy press conference, the Russian president said that it was necessary to make the decision that “should have been made a long time ago.”

“I deem it necessary to make a decision that should have been made long ago,” Putin said. “I am confident I will have the support of the people of Russia.”

During the speech, Putin fired a warning shot at the Ukrainian government in Kyiv, demanding that it “immediately cease all military action” against the separatist forces or face “full responsibility” for the consequences of its actions.

The Russian president expressed grievances about the country’s relations with the West following the fall of the USSR, and questioned the historical underpinnings of Ukraine as a nation. Putin blamed Ukrainian politicians and the West for drumming up divisions in the region.

Putin denounced the Maidan revolution of 2014, stating that it had not led the country to the “Western” direction revolutionaries proposed, and had instead resulted in economic failure and “terror” for many of its citizens.

Putin’s recognition of the two breakaway regions is the latest update amid escalating tensions in the region, with U.S. President Joe Biden repeatedly warning that Russia could invade Ukraine at any moment.

According to the U.S. State Department, some 190,000 Russian troops and separatist forces are estimated to be amassed near the country’s border with Ukraine. Russia has denied any plans to invade and reiterated demands for the United States and NATO to bar Ukraine from joining the military alliance.

The Russian president said he believed the West would impose sanctions on Russia regardless of what comes next.

“A pretext for the next sanctions attack will always be found. Or fabricated. There is one goal to contain the development of Russia,” he said.

U.S. Secretary of State Antony Blinken condemned Putin’s recognition of the two territories as independent, stating that “this decision represents a complete rejection of Russia’s commitments under the Minsk agreements, directly contradicts Russia’s claimed commitment to diplomacy, and is a clear attack on Ukraine’s sovereignty and territorial integrity.”

Blinken described the move as a “flagrant disrespect for international law and norms,” and repeated an earlier announcement of U.S. President Joe Biden’s to sign an executive order authorizing limited sanctions in the region Putin declared independent.

NEW Secretary of State Antony Blinken condemns Putin's 'flagrant disrespect for international law and norms.' And on the forthcoming sanctions:
'The E.O. is designed to prevent Russia from profiting off of this blatant violation of international law.' pic.twitter.com/GAZ77LjACI

Ursula von der Leyen, president of the European Commission, slammed Putin’s decision to recognize the two breakaway states, calling it a “blatant violation of international law, the territorial integrity of Ukraine and the #Minsk agreements."

The recognition of the two separatist territories in #Ukraine is a blatant violation of international law, the territorial integrity of Ukraine and the #Minsk agreements.

The EU and its partners will react with unity, firmness and with determination in solidarity with Ukraine.

In a statement, the European Commission said it will react to Putin’s announcement with sanctions “against those involved in this illegal act,” ABC News reported.

“This is plainly in breach of international law — it's a flagrant violation of the sovereignty and integrity of Ukraine. ... It is a repudiation of the Minsk process and the Minsk Agreements,” said British Prime Minister Boris Johnson.

“I think it's a very ill omen and a very dark sign,” Johnson said, describing it as “yet another indication that things are moving in the wrong direction in Ukraine.”

Johnson’s statements were supported by France’s Emmanuel Macron, who described the move as a violation of Russia’s “commitments and undermining Ukraine’s sovereignty,” and called for an emergency meeting of the UN Security Council and European sanction.