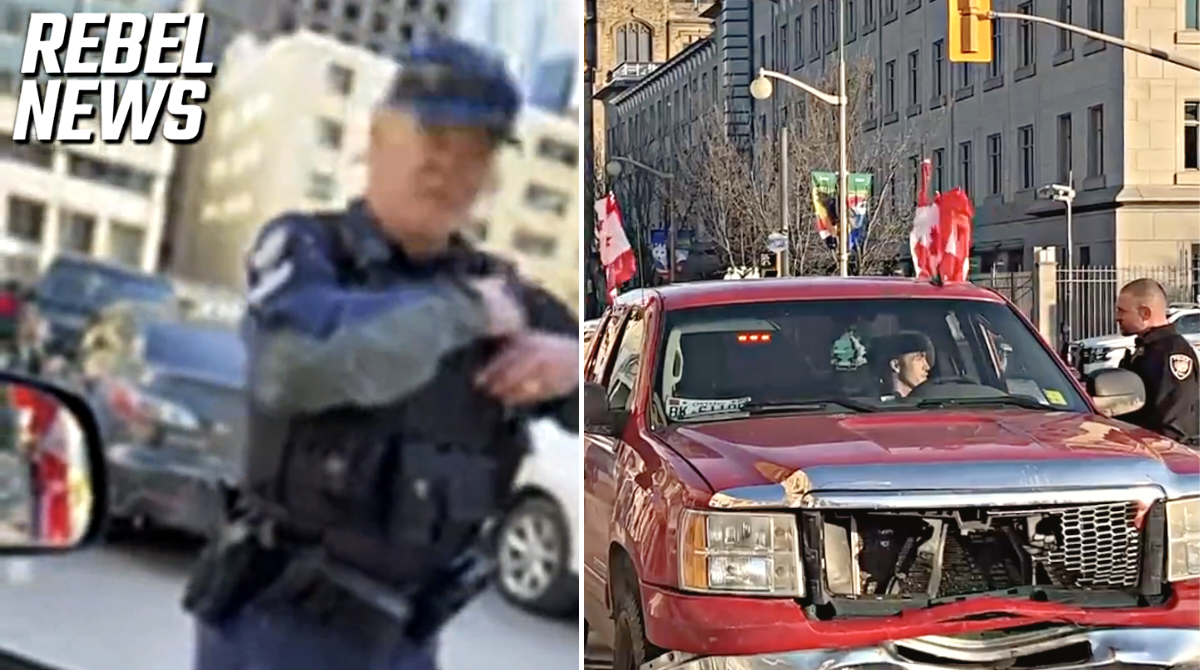 The group was in Ottawa Friday night to support the bikers' convoy against COVID-19 mandates and the treatment of the previous Convoy to Ottawa in February after the Liberal Government used the Emergencies Act to seize property and bank accounts and arrest organizers.

This video was sent to me. The people who shot this video were allegedly asked by police to vacate a downtown Ottawa parking lot for the egregious crime of… flying a Canadian flag upon their vehicle?! They were then allegedly told to leave Ottawa! Why? https://t.co/8hpC710hZK pic.twitter.com/WRi7xgmCtL

Ottawa police, as well as police from all across Ontario —including an RCMP contingent of 800 authorized to work inside Ottawa city limits — began creating a downtown “exclusion zone” where only “lawful traffic” is allowed:

Downtown Ottawa is a mess right now. Police are blocking off any vehicle access to parliament hill. OPP officer is not clear with us on when we will be able to drive back to our hotel which is near parliament hill. @ThevoiceAlexa https://t.co/8hpC710hZK pic.twitter.com/S8tYMTghLY

The Rolling Thunder convoy, which says it is comprised of veterans, was met by a few hundred anti-biker protesters describing itself as an “unwelcoming party” in Ottawa's Strathcona Park:

Rebel News reporter Lincoln Jay is part of a three unit team of Rebel journalists in the nation's capital this weekend to document the treatment of peaceful demonstrators at the hands of police and to show the side of the protest the mainstream refuses to.

Back in Ottawa this weekend to cover the “Rolling Thunder” rally happening this weekend. To stay up to date with our coverage, visit our website at https://t.co/8hpC710hZK @RebelNewsOnline pic.twitter.com/MRD2WokESF

Lincoln's live stream from Friday night shows the police kettling off vehicles for towing, allowing cars into the exclusion zone only to prevent them from leaving:

Police moving in on Rolling Thunder rally in Ottawa https://t.co/FJhYLT9kc1

To support the work of the Rebel News team and to see their live and comprehensive coverage from Ottawa inside the Rolling Thunder demonstration, please visit www.ConvoyReports.com.