At the airport in Kabul, Taliban spokesman Zabihullah Mujahid celebrated the departure of American forces as a “historical day and a historical moment.” 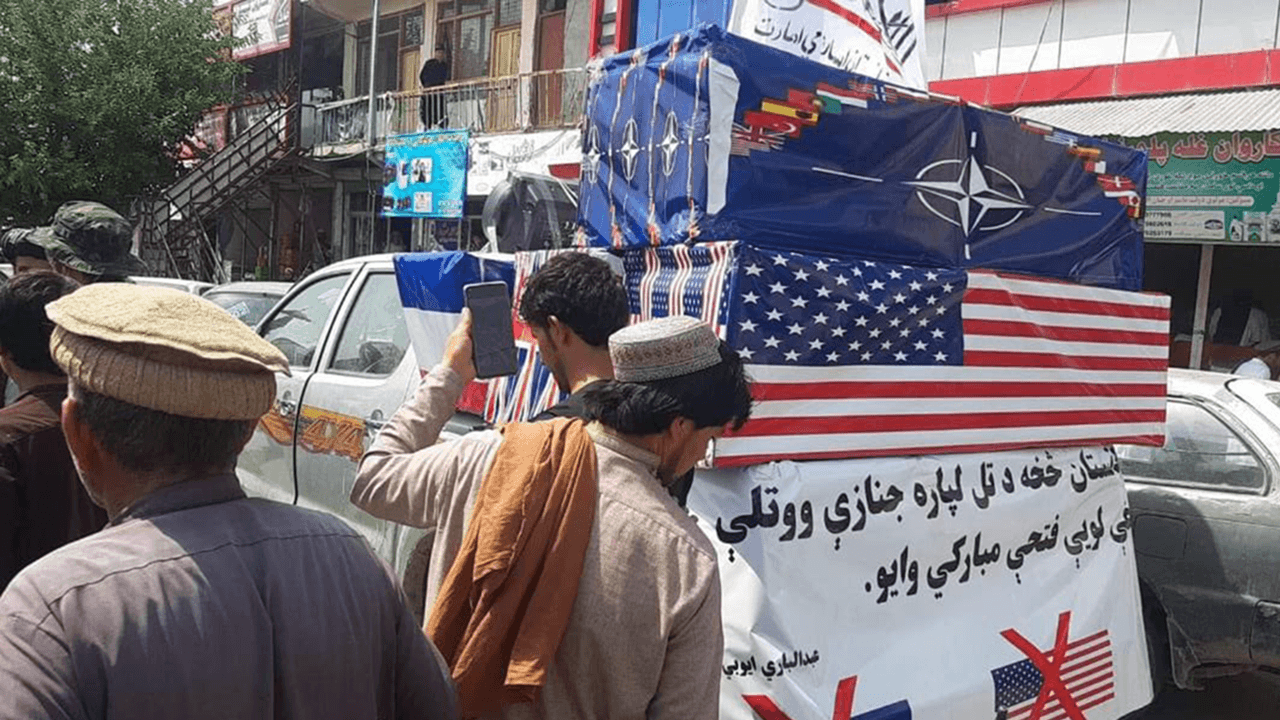 Taliban militants mocked the withdrawal of U.S. and NATO forces from Afghanistan by staging a mock funeral in Khost, with coffins draped in United States and Coalition forces flags. Members of the terrorist group flew the Taliban flag at the parade, as well as the national flag of Afghanistan.

Video footage and photos of the parade were shown on social media.

Of course, we will form the government but let us complete more important tasks such as staging a mock funeral of the US and the NATO first.

Thousands of locals in Khost have come out today to celebrate the US military withdrawal from Afghanistan. Seeing both the Taliban flags as well as Afghan National Flag. pic.twitter.com/YQVncq5boh

Mock funeral of US and NATO in Khost where thousands have gathered today to celebrate the completion of US withdrawal. #Afghanistan https://t.co/FaYyTwb8mH pic.twitter.com/imd1zJF8hB

At the airport in Kabul, Taliban spokesman Zabihullah Mujahid celebrated the departure of American forces as a “historical day and a historical moment.”

We are proud of these moments, that we liberated our country from a great power,” he said, according to Reuters. “The Islamic Emirate wants to have good diplomatic relations with the whole world.”

A Taliban militant at Bagram Air Base said in an interview with the Times that he expects the Taliban to expand following its victory against the United States and spread the Taliban’s jihad “further into the region and Muslim world.”

Never in our wildest dreams could we have believed we could beat a superpower like America with just our Kalashnikovs. When you do jihad all doors open. We defeated America with our faith and our guns and we hope now that Bagram can be a base for jihad for all Muslims. For any foreign power considering attacking Afghanistan then look at Bagram now and learn your lesson well before embarking on foolish endeavor. See the West’s mighty technology humbled here by mujahidin.

In 15 years as a mujahid fighting the Americans I wondered often if I may fail or die. Yet here is proof of the power of faith and God and jihad. On the back of victory I hope we can use Bagram as a place to spread jihad further into the region and Muslim world.

On Monday, Rebel News reported that the Biden administration has come under fire from military veterans, including U.S. Marine officer Lt. Col. Stuart Scheller, who was fired for demanding accountability from military leadership over its disastrous handling of the Afghanistan withdrawal.

A U.S. Marine commander who spoke out against the Biden administration and demanded accountability from military leadership over the deaths of at least 13 U.S. service members in the recent Kabul airport attack was relieved of command for his remarks. He then resigned his commission following his dismissal.

Remarks by Lt. Col. Stuart Scheller, a U.S. Marine infantry officer and battalion commander, went viral last week as he called for members of the Biden administration to be held accountable for the disaster.