A standoff has ensued at the Alberta/Montana border, where truckers supporting the Freedom Convoy have vowed to remain despite police presence. 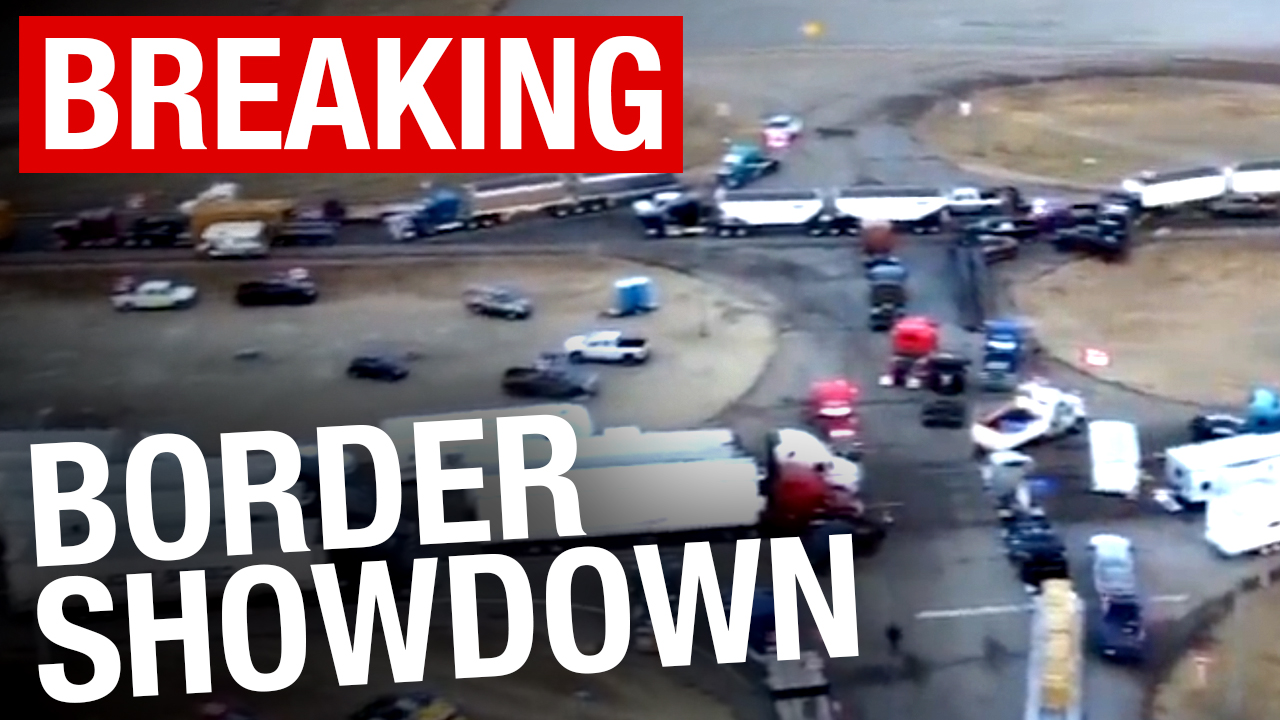 RCMP negotiators have met with a group of around 50 truckers who are blocking the border in Coutts, Alberta.

The truckers are here in support of the Freedom Convoy in Ottawa to end all mandates.

The RCMP has blocked all roads into the border town, denying supporters access to food and water.

After three days of blockading, the protesters have opened a lane to let gridlocked truckers, who are not part of the protest, leave. This decision was made in hopes the police would allow food and water past the checkpoints.

The ongoing negotiations have ended on a “part one” basis and will eventually continue, with both sides for a hopeful resolution.

Sydney Fizzard and I have been on scene since 3 a.m. last night, bringing Rebel News viewers the other side of the story. Please support us at ConvoyReports.com.

Tensions are ratcheting up with police and tow trucks descending on the scene. Blockaders have now opened up one lane of traffic to allow locals, school buses and emergency vehicles access to the border.

A lane opening up for the locals, the border will remain blocked.

Any truckers who want to leave now have a chance.

What started as a cross-border protest of hundreds of truckers and locals at the Coutts, Alberta-Sweet Grass, Montana border crossing Saturday morning had turned into a full-on blockade of the southbound lane of Alberta Highway 4 by Sunday.

The so-far peaceful demonstration was organized to show support for the Freedom Convoy that headed to Ottawa, which has now ground the nation's capital to a halt. That convoy began in opposition to federally-imposed vaccine requirements for cross-border truckers and has grown into a national movement against lockdowns and restrictions for all Canadians.

Reports of police and tow trucks moving in to clear the border circulated on social media:

UPDATE: This was sent to me earlier

The hundreds of truckers aren't budging, as they demonstrate by parking at the border of Montana.

A local was watching twitter for updates in her pajamas, shocked to see tactical units outside her house in Coutts Alberta.

She came to support the hundreds of truckers here, with more on the way being blocked by checkpoints outside town.

According to Rebel reporters Kian Simone and Syd Fizzard, who have been on the scene of the stand-off since late last night, despite a winter storm and near-zero visibility, the protesters have voted to remain. Should they do so, they face fines $10,000 for a first offence or $25,000, as well as jail time.

Surrounded and forced to make a difficult decision. Motion has passed, they are staying.

The group gathered in a local establishment to pray:

The truckers turn to God, surrounded and cornered in by Kenneys government.

The truckers involved in the blockade explained their decision to Kian:

UPDATE: truckers speak after decision to stand their ground.

American truckers at the border have offered support for the Canadian blockade:

"DON'T OPEN THE BORDER" says an American trucker who was gridlocked for 3 days away from his family and his work.

Even those inconvenienced are understanding and in support.

Don't believe what the media is saying, we are HERE on the ground.

The blockade of the Coutts border crossing violates the Alberta Traffic Safety Act.

It is causing significant inconvenience for lawful motorists and could dangerously impede movement of emergency service vehicles.

This blockade must end.

Kian and Syd will remain on the scene, providing us with live updates, as negotiations between truckers and police continue.

With the police moving to surround the protest, Rebel reporters risk being arrested along with the truckers, but Rebel News has a legal team standing by to help if our team is detained for doing journalism.

To support our coverage of the protest blockade at the Coutts border, please visit www.ConvoyReports.com.