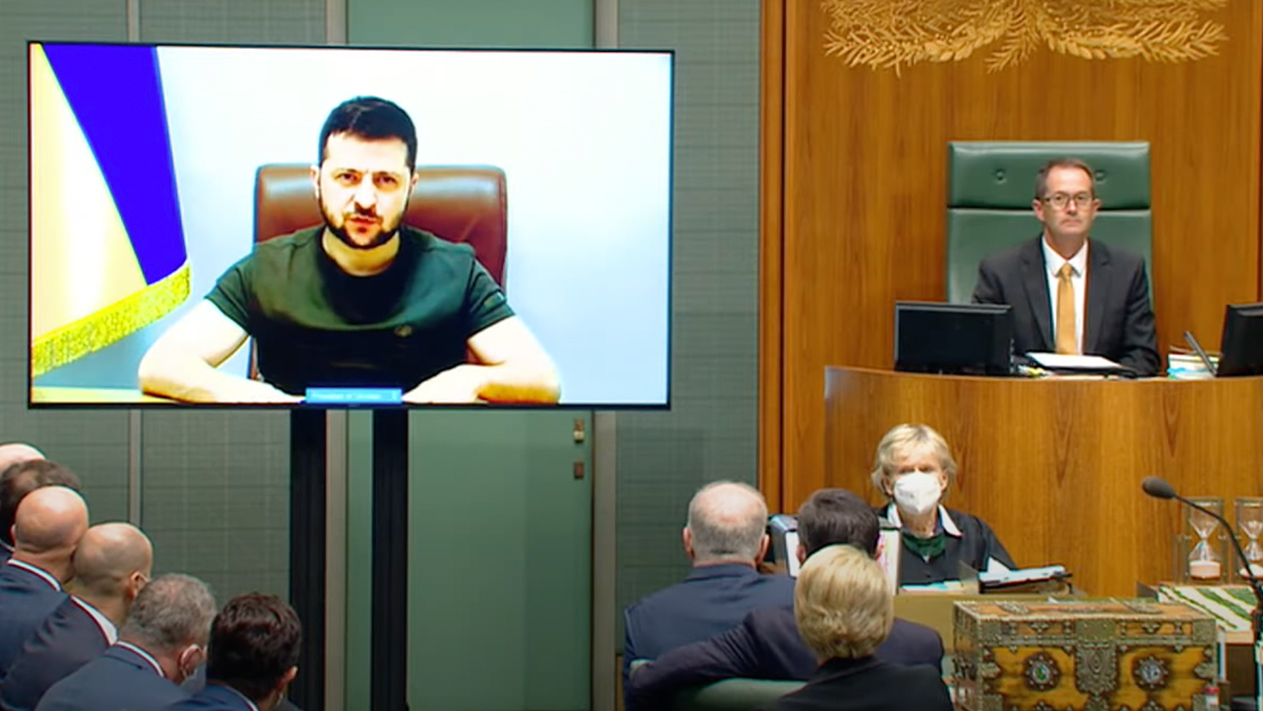 A refugee Ukrainian family that arrived two days ago in Australia has arrived in Canberra in time to hear President Zelenskyy address Parliament.

"We are with him, but thank God that we’re here,” said Oksana, a primary school teacher from Lviv.

Oksana travelled to Australia with her two daughters Yaryna, who is a dentist, and Yustyna, who is a nurse in training for dentistry. They brought their children, aged four, eight, and 11.

In his address, Zelenskyy warned Australia of the future global impacts if Russia was allowed to continue its invasion in his country.

Zelenskyy said his country was in desperate need of further military aid, identifying the Australian-built Bushmasters to assist in the defence against the Russian invasion.

“We have to stop any intention from Russia to bypass sanctions; Most of all we have to keep the heroes fighting these people armed,” he told Australian Parliament.

“For example, you have very good armed personal vehicles, bushmasters, that could help Ukraine substantially.”

"We are not just sending our prayers, we are sending our guns, ammunitions, humanitarian aid, all of this, our body armour, all of these things," Morrison said.

This is in addition to the $70 million for lethal aid and $35 million for non-lethal aid Australia has already pledged to the war-torn nation.

Australia is one of many nations accepting refugees from three million left homeless in the Ukraine-Russia conflict.

“We feel safe, we feel free,” added Oksana, who is now staying in Canberra after arriving on tourist visas. The government has agreed to change these over to humanitarian visas soon to allow refugees from Ukraine to work while in Australia.

“We’re very happy with the help from family and to Australia for supporting us.” Oksana added, “Before the war we lived very well. We had a good job, we all worked, we had a good life, we had lovely homes, we built our homes.”

The family were forced to leave the men behind. The three husbands between them are back in Ukraine, fighting against the Russian forces invading their home. Oksana also accused people inside the community of helping Russian soldiers by making marks on the road so that the warplanes could navigate on bombing routes. Ukrainian people and soldiers were taking down road signs to make navigation more difficult for inexperienced Russian troops.

Russian’s soldiers entered their area with terrifying speed, giving the family little time to do anything but flee.

“We saw Putin’s soldiers. It was scary, we were all scared stiff, the sirens were going. We had to, all the time with the sirens, we had to collect the kids and go underground. It was at night – or in the morning – it just kept going. We took the children underneath and we didn’t know whether we were going to come out of this alive or not.”

The family tried several times to get across the border, turning back on one occasion due to huge lines of desperate people in front of them. Eventually they succeeded, and now they are staying with extended family members in Canberra.

It has been reported that over 136 children have been killed in the conflict so far, with protesters in Ukraine leaving empty strollers in the town square to signify the slaughter.

“I’d like to tell him [Putin] I hope you live through the things we’ve been living through. We don’t want his nation [Russia] to suffer like we do, but we want them to understand how he’s [Putin] tricked the nation and is lying about what has happened,” said Oksana.

The family is from Lviv, which is a large city in Western Ukraine containing a UNESCO World Heritage Site listing. In the last week, Lviv has been hit by heavy Russian missiles, causing significant damage to the old city. Four days ago, the Lviv oil facility caught fire. Due to its proximity to Poland, journalists and foreign fighters are entering Lviv to join the battle against Russia.