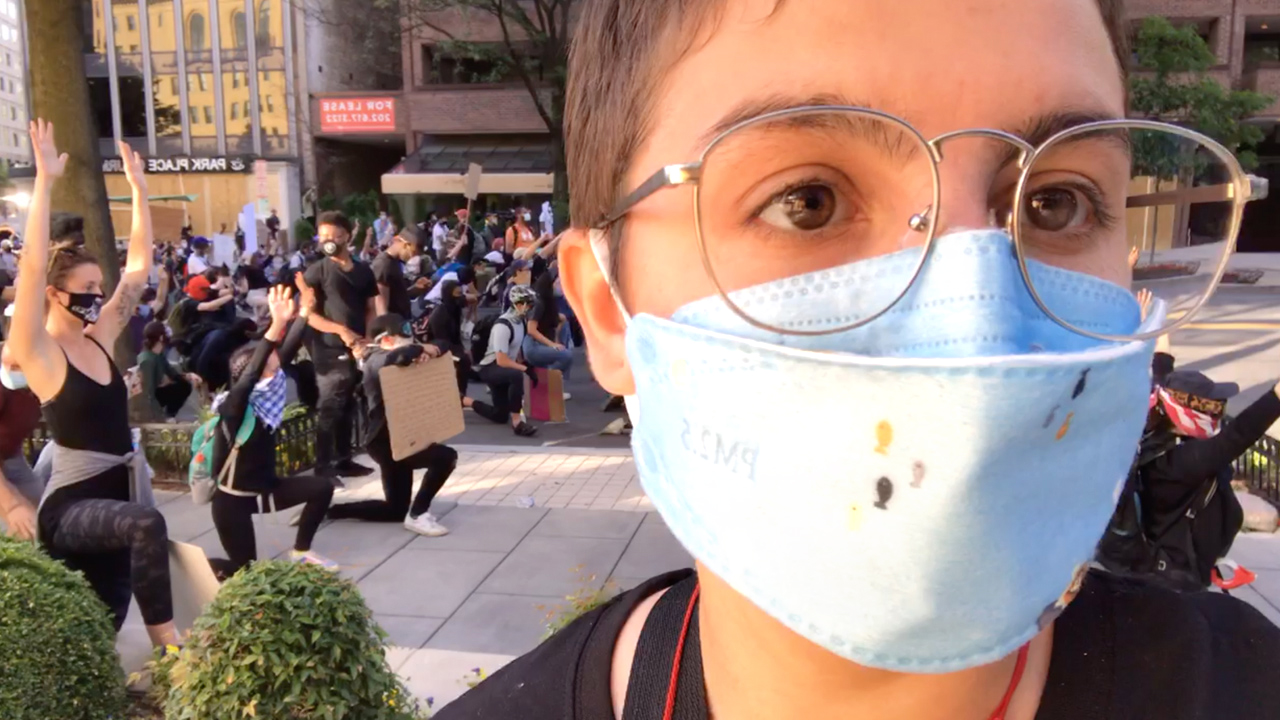 Special Thank You From Anna Slatz

On June 8, 2020, I was arrested while covering the riots and looting in New York City that followed the police-involved shooting of George Floyd.

While taking footage of a burglary taking place at a Zara clothing outlet on Broadway, I was accosted by NYPD, who demanded I comply with curfew and vacate the area. Press was exempted from the city’s curfew, and I did have my Rebel News identification on me. I was violently manhandled by two officers, before finally being arrested on a sidewalk while I was attempting to back away from the crowd which had surrounded me.

Though looters with backpacks full of clothes and other stolen items were within reach, NYPD chose to arrest me along with a handful of other bystanders who were simply witnessing the chaos. And while actual criminals were released within hours of their arrests, I was held for almost 48 hours before being allowed to speak to a judge.

In response to my arrest, Rebel News launched a fundraiser to cover the legal expenses associated with trying to locate and release me. Over $11,000 was raised, of which I am infinitely grateful.

This was not bail money – New York does not have cash bail, a fact which had made the city incredibly unsafe as violent criminals are able to walk the streets quickly after their arrest. These funds were used to retain four lawyers who worked tirelessly to locate and advocate for me, NYPD having changed my booking station mid-way during my sentence and making it almost impossible for me to be contacted. My great legal team included Michael Weinstock, a former 9/11 firefighter and congressional candidate.

I walked free two days after my arrest; a judge immediately releasing me after realizing I was a foreign journalist. On July 17, the District Attorney announced they were declining to pursue me further and dismissing my case.

After the lawyers were paid, I was given the remaining $1,312 left over from the fundraiser after my legal fees were paid. I am infinitely grateful to my Rebel News family for looking out for me during a dire time.

The story of my arrest was covered by the U.S Press Freedom Tracker, Committee to Protect Journalists, and Women in Journalism. It also contributed to a report in Human Rights Watch on the arrest of journalists in the United States.

No matter what outlet a journalist works for, they should be free to cover the news without fear of arrest or assault by rioters or police. At Rebel News, our viewers make it possible for us to continue to be fearless journalists free of influence.

Your support truly makes the difference!

LIVESTREAM: Ezra Levant with an update on Anna Slatz's release

An update from Anna Slatz

BOY, DO I HAVE A STORY FOR YOU!

Please give me a few to catch my bearings, get to a hotel, and speak to my family.

(Yes, my glasses are broken. That’s part of the story, babes) pic.twitter.com/WQw4yS5UMj

BREAKING: We are advised that @YesThatAnna was released from custody at 12:39 p.m. We are thrilled but this comes as a surprise to us as our lawyers had advised that her arraignment had not yet happened. We are looking into this urgently, including trying to locate Anna herself.

It's been 36 hours since our reporter https://t.co/XjTcDx7m9e was arrested in New York. She has now spent two nights in jail without a hearing.

Not a peep from @cafreeland or @FP_Champagne or @JustinTrudeau, let alone Canada's so-called free press groups.

It's been over 24 hours since @YesThatAnna has been arrested and she still haven't been in front of a judge.

Will reporter Anna Slatz have to spend a second night in jail in NYC?

Please watch this special edition of tonight’s Ezra Levant Show, that we have put outside the paywall, for free on YouTube, to show you the story:

Anna still has not been released. In this video, our Toronto-based lawyer Aaron Rosenberg calls in to update us on the work he's done to put together a legal team including Michael Weinstock on the ground in New York and how they're tackling getting Anna out of jail. Click here to view the full story.

Interview with Yanky Pollak, currently on his way to NYC to meet Anna after she was arrested while covering the riots for Rebel News. Click here to view the full story.

In this interview, filmed this afternoon right before her arraignment, Michael walks us through the steps of what will happen with Anna next. Click here to view the story.

BAD NEWS: Our NYC lawyers say the paperwork to release @YesThatAnna has not yet been processed by the police. "It's going to be a long day/night", says one of our lawyers. Police typically have 24 hours to bring a suspect before a judge. Help us out at https://t.co/XjTcDx7m9e

Our new reporter, Anna Slatz has just been arrested by police, and taken to Brooklyn central booking!

She was apparently arrested for being out past the curfew — even though journalists are specifically exempt from it!

She only had a few moments on the phone before police took it away.

My next call was to our New York City criminal lawyer. Even though it was almost 11 p.m., he called me back immediately, and started to go to work.

Anna has done an exemplary job for us — you can see all of her work on www.StopAntifa.com. It is calm, professional and very well-done. She was completely law-abiding, and a credit to both our company and the profession.

The Zara was just broken into.

Obviously we want to get her free immediately — and I’m very pleased to report that we have an excellent lawyer on the file right now.

Please keep Anna in your thoughts, and if you can help us cover this emergency legal cost, please do so on this page.

Anna is a brave young woman who has done great journalism. But jail is no place for her — especially a jail packed with rioters and looters.

Please help us as we work through the night with our New York lawyers to get her free.

Anna is very passionate about justice and freedom. Her reporting has pointed out how violent Antifa protesters have hijacked peaceful political protests. It’s so important that she be freed, to continue telling her story.

We have hired an excellent lawyer in New York, who has helped us before. He literally started working on this project at 11 p.m. tonight. If you can help cover that emergency cost, please chip in below.

Any additional funds raised beyond the costs of our legal fees will be paid to Anna.

Or contribute by cheque by making it out to Rebel News and mailing the cheque to:

Spread the Word!
Stop ANTIFA
We use cookies to personalise content and ads, to provide social media features and to analyse our traffic. We also share information about your use of our site with our social media, advertising and analytics partners who may combine it with other information that you’ve provided to them or that they’ve collected from your use of their services. You consent to our cookies if you continue to use our website.
×