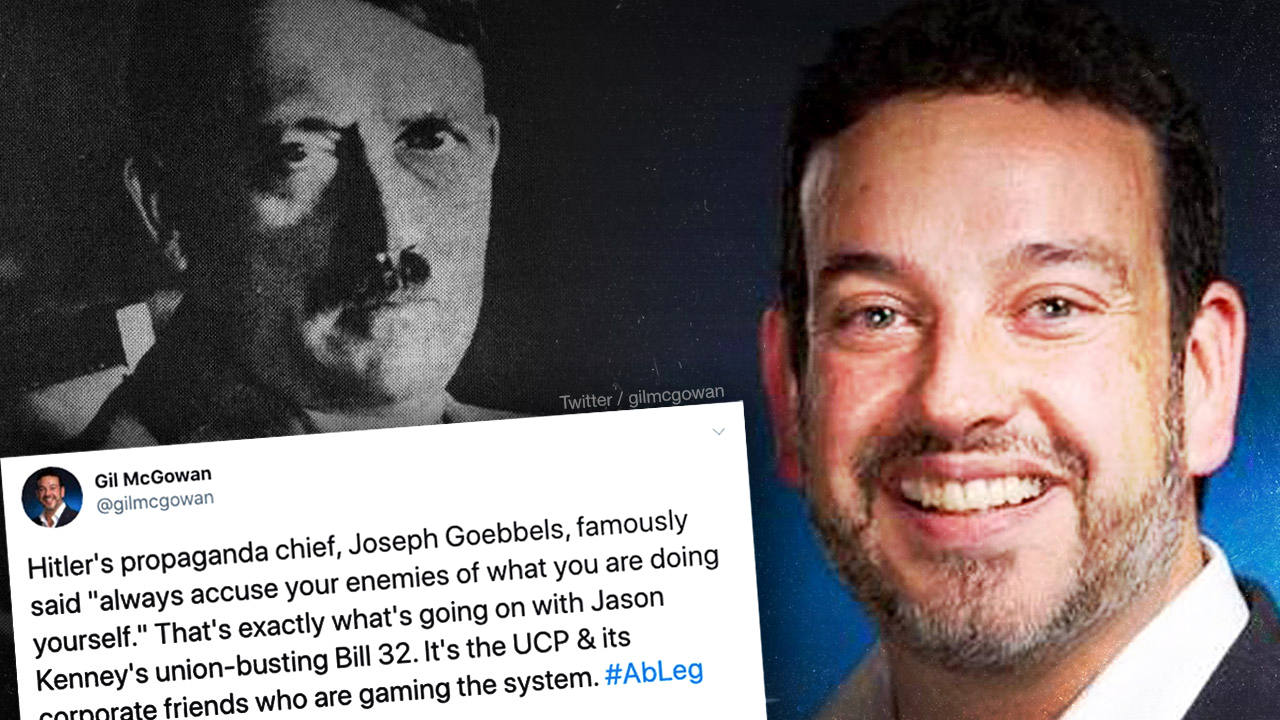 In the string of tweets, McGowan lamented Bill 32 and equated its campaign finance reform to the Holocaust.

Hitler's propaganda chief, Joseph Goebbels, famously said "always accuse your enemies of what you are doing yourself." That's exactly what's going on with Jason Kenney's union-busting Bill 32. It's the UCP & its corporate friends who are gaming the system. #AbLeg #abpoli #cdnpoli https://t.co/FEAFJqMtMr

"Hitler's propaganda chief, Joseph Goebbels, famously said 'always accuse your enemies of what you are doing yourself.' That's exactly what's going on with Jason Kenney's union-busting Bill 32. It's the UCP & its corporate friends who are gaming the system," one tweet read.

McGowan, who is running a campaign called “Not What I Voted For,” has been using union money for years to affect the political tides in Alberta.

Under Kenney’s latest bill, this program would be crippled by requiring McGowan to collect opt-in permission from union members to spend the cash on political activity.

The irony of this accusation is that it comes from a leader within a party which vehemently supports the ethnic boycott of Jewish made and designed products via the Boycott, Divestment and Sanctions or "BDS" movement.

McGowan was met with immediate and harsh criticism:

Pro Tip: Don’t use the words “Hitler”, “Nazis” or “Goebbels” when attacking your partisan opponent. It sort of makes one look cheap, insensitive and unhinged. https://t.co/mJr3PgXQ9Z

Just in case any Twitter users were unclear what the union boss was suggesting, he doubled down on his comparison in another tweet, linking the leaders of numerous countries to Nazi German era authoritarians:

And, yes, I'm accusing the UCP of adopting tactics pioneered by the Nazis and being implemented right-wing authoritarians today. Hungary, Turkey, Brazil, India, Trump's America. These are all countries led by authoritarians who Kenney calls friends. This is what we're up against.

Since posting the tweet and at the time of publishing this article, McGowan has neither deleted the tweet nor apologized for the remarks.