With the emergence of the COVID-19 pandemic, increasing geopolitical tensions have turned global attention towards human rights abuses in China. Among the most horrific and unspoken of those abuses is the billion-dollar cadaver industry turning political prisoners into medical specimens.

In 1999, Germany’s Von Hagen Plastination established a factory in Dalian, Liaoning Province, China. Plastination, the process of taking cadavers and preserving them for display, requires corpses which have passed within two days in order to be processed. Gunter Von Hagen, the owner and founder of the factory, partnered with Sui HongJin, his student and a Chinese national, in order to source cadavers for plastination.

That same year, massive raids and arrests were conducted in Dalian and across greater Liaoning province on practitioners of Falun Dafa, a Chinese religious minority.

After human rights groups began to sound the alarm, Gunter Von Hagens began to insist his factory was not sourcing corpses from political prisoners. But a 2004 expose by German news discovered a 9-month-old fetus at the facility labeled as originating from the “Public Security Bureau,” and it forced Von Hagens to effectively cease production of plastinated cadavers using anything but North American and European-sourced corpses.

Many of the Chinese models were returned to China, after some that were sold to anatomy exhibitions were found to have bullet holes in their skulls.

Today, Von Hagens operates out of Germany, and claims “95%” of their bodies are scientific donations.

But the horror story did not end with Von Hagens:

Sui HongJin, Von Hagen’s assistant, opened his own plastination factory in Dalian shortly after his mentor’s disgraced exit. The Dalian-Hoffen Bio-Technique Corp. has been brazenly operating since.

On its website, Dalian-Hoffen displays a partnership with the International Society for Plastination, which holds annual meetings in the European Union, Canada, and the United States. It also declares it is associated with the Dalian Medical University, of which Sui HongJin is also the Director of the Department of Anatomy.

The University has provided plastinated cadavers to the renowned Premier Exhibitions, which ran Bodies: The Exhibit, a showcase which previously held international, for-profit exhibitions in major US cities. While the Bodies website is just recently unavailable, a screengrab from October 2019 shows a disclaimer claiming there was a possibility that the specimens they displayed were the corpses of Chinese prisoners. 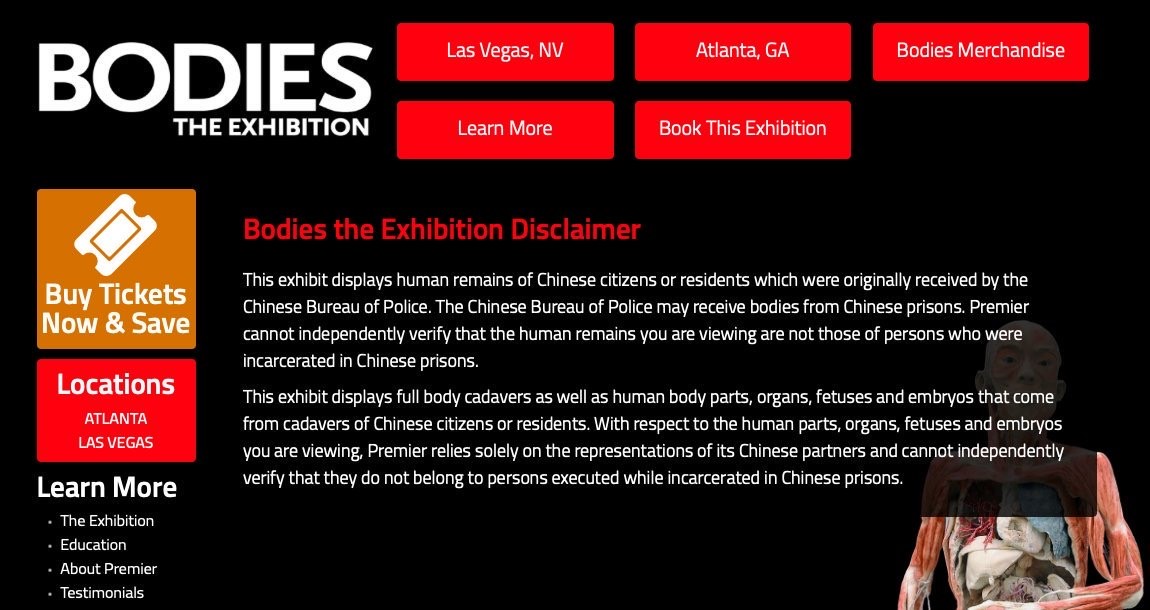 Tickets remain available for Bodies: The Exhibit, which has a permanent home at the Luxor in Las Vegas, though sales are suspended due to COVID-19.

It also explicitly declares Sui HongJin as the responsible party.

However, unlike Premier Exhibitions, nowhere in their FAQ do they state that the bodies may have been sourced from Chinese prisoners, insisting throughout that they are ethical donations or “unclaimed bodies.” This is despite Sui Hongjin’s well-documented history of relying on Chinese prisons for their cadavers.

China has one of the lowest tissue donation rates in the world, and peer-reviewed studies have affirmed major discrepancies in the rates of organ and tissue donations versus registered, voluntary donors. This is often attributed to Chinese culture, which treats an in-tact body upon burial as an expression of respect towards the deceased. As a result of cultural stigma, Chinese people are less likely to donate tissue, and China has one of the lowest organ donation rates in the world.

Reaching out to Imagine Exhibitions, the overhead which runs “Real Bodies at Bally’s,” I asked how they are so certain the plastinated specimens they are displaying are ethically sourced when Premier Exhibitions was not, and whether Dalian-Hoffen had provided than any proof of explicit informed consent. They did not respond prior to publication.