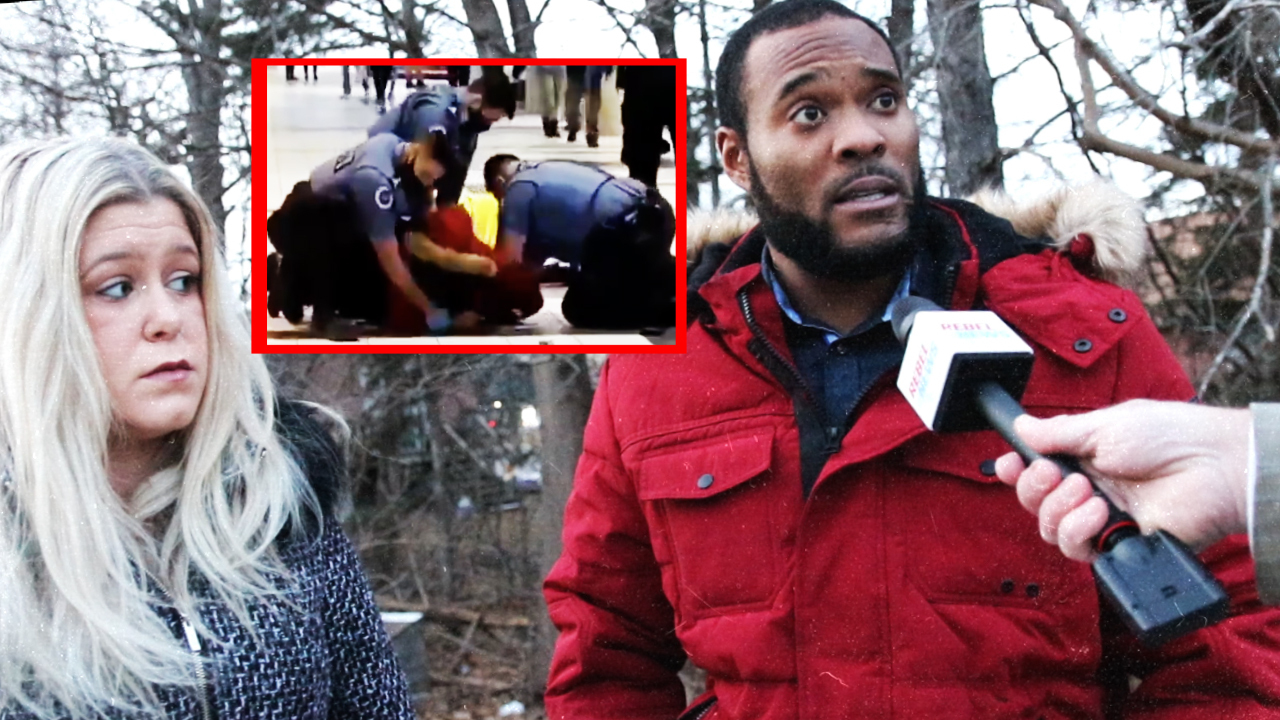 Talk about a surreal shopping spree, thanks to yet more Wuhan virus insanity — and some overzealous security guards.

Earlier this month, Pickering, Ont. resident Josh Walker and his pregnant girlfriend, Samantha-Lynn Johnson, visited Upper Canada Mall in Newmarket to do a little shopping. The last thing Joshua expected to happen was for a half-dozen security guards to pile on him and then, later, to get criminally charged by the police.

The madness began when Joshua, who is a member of the Canadian Armed Forces’ Queen’s Own Rifles regiment, went to the mall’s food court for a snack. Joshua soon discovered that while the mall’s food court was open for business, patrons were not permitted to sit down to consume their meals. And this is when the trouble began.

Joshua says even though he wasn’t the only one eating his food in the food court, a mall security guard soon focused his attention on him. Both Joshua and Samantha-Lynn believe that Joshua may have been racially profiled, given that he is black.

Joshua says he complied with security’s request to pack up his food and leave the mall under escort of the security guards. Because Samantha-Lynn is 18 weeks pregnant, Joshua asked to leave the mall at the exit that was closest to the couple’s car — a request that was allowed. It was during the couple’s frog-march out of the mall that things veered off the rails – but thankfully, it was all recorded on a cellphone camera.

Here’s what unfolded: Joshua says a guard allegedly told them that if they didn’t leave, they would be charged with trespassing. This statement struck the couple as bizarre, given that they were already leaving the mall and heading toward an exit.

Joshua then made a statement on camera that seems to have triggered the guards. Said a giggling Joshua: “You have got the three f---ing stooges here. There’s Larry, Curly, and f---ing Moe.”

At this point, Joshua says he was pushed and shoved, and the video shows Joshua telling the guards, “Don’t put your hands on me, bro.”

That’s when one security guard states: “You are under arrest for trespassing!”

Joshua was then thrown to the floor. At one point there were six guards restraining Joshua, who was later taken to a York Region hospital for minor injuries.

But in the department of insult to injury, the following day, York Regional Police charged Joshua with intent to resist arrest under the Criminal Code and another charge of violating the Trespass to Property Act.

How can this be, given that the camera tells a completely different story?

As far as we can tell, Joshua was NOT in breach of the Trespass to Property Act. For starters, he was actively complying with the order to leave the mall premises. Joshua and Samantha-Lynn never broke the law; on the contrary, they were cooperating with the guards’ demand that they must leave. In that regard, the attempted citizen’s arrest on him was unjustified, unreasonable and illegal.

When Joshua likened the guards to the Three Stooges, somehow this justified physically stomping on a man? We think not. (Rebel News reached out to Upper Canada Mall for comment, but our request went unacknowledged.)

As far as we’re concerned, this was an egregious attack on an innocent man. We think Joshua deserves justice, so we are picking up his case on two fronts:

Can you kindly help us go to bat for Joshua? Please visit HelpJoshua.com and, if possible, make a donation so that we can raise the necessary legal fees as we attempt to remedy a grotesque injustice.