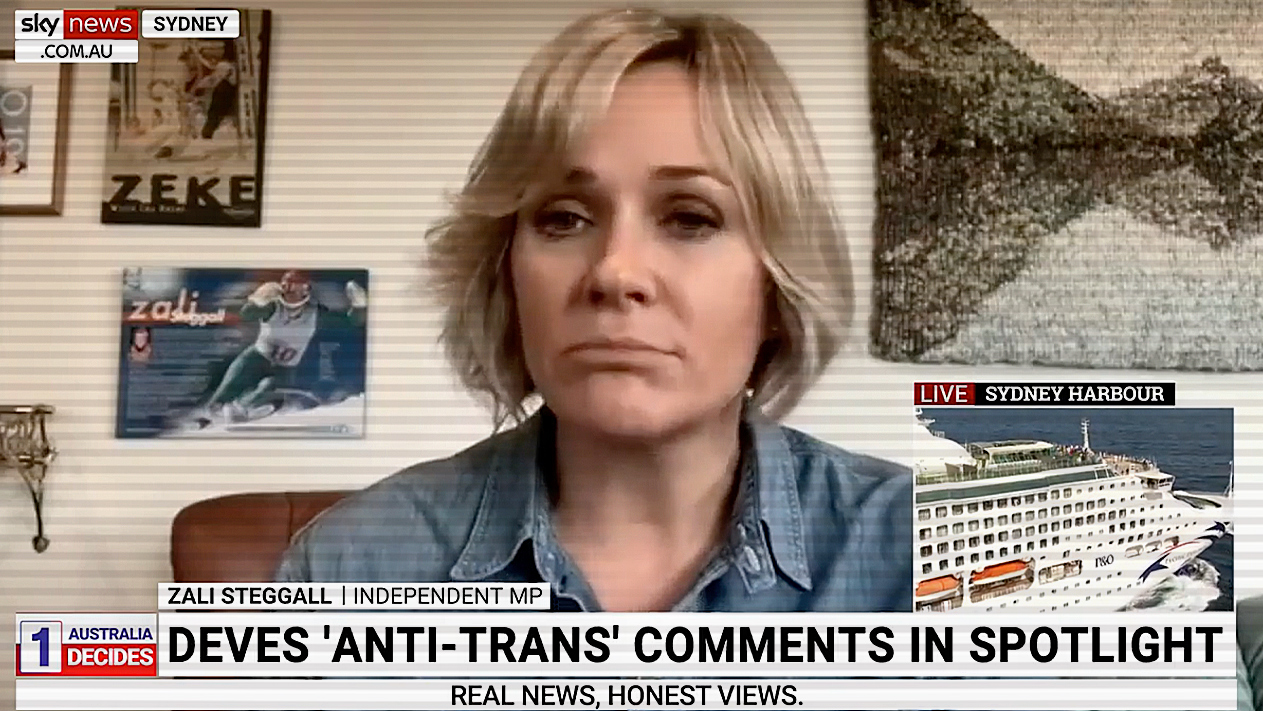 Independent Member for Warringah Zali Steggall described the issue of protecting women and girls in sport as a ‘dead cat strategy'.

Speaking on Sky News Australia with Laura Jayes, Steggall made the comparison while describing Liberal candidate Katherine Deves’ desire to protect the rights of women and girls in sport against biological men.

“I think this is a bit of a dead cat strategy. You put something very controversial on the table and that distracts away from other issues,” she said.

Steggall went on to insist multiple times that the issue was ‘divisive’ and a ‘distraction’ from topics such as climate change. Steggall occupies former Prime Minister Tony Abbott’s seat after winning it during the previous federal election with help from activist group GetUp!. The Sydney Morning Herald wrote in 2019 that Steggall’s campaign was supported by a war chest of $1.1 million – mostly from wealthy climate activists and businesses.

Co-founder of ‘Save Women’s Sport’ and rival candidate for Warringah Katherine Deves has been the subject of a vicious and relentless campaign of bullying from activists and trolls. Her primary focus has been to fight for the protection of women and girls in sports, but also to enforce stricter rules to prevent the permanent surgical alteration of children during gender affirmation.

Biological men competing, winning, and setting unattainable records in women’s sport is an issue that has caused worldwide outrage as the achievements of biological women are erased by transgender athletes. It is also popular, according to a range of public opinion polls. Feminists and women’s rights movements fought hard to see women treated fairly in sport only for them to face dominance from men. Female athletes that speak out are often set upon by social media trolls, activists, and news organisations until they recant their position leaving some women too afraid to speak at all.

When it comes to girl’s sports, parents have voiced their concerns about the safety of girls engaging in contact sports with boys where they can end up injured by stronger, bigger players.

“I feel there’s a lot of lying going on about the actual status quo, we already have a law. The Sex Discrimination Act already deals with the situation, this is just not an issue,” said Steggall.

Senator Claire Chandler has a Private Member’s Bill (Sex Discrimination and Other Legislation Amendment (Save Women’s Sport) Bill 2022) to specifically clarify the spirit of the Act – which was written at a time when women and men were assumed by law to adhere to the biological definition.

According to the sex discrimination commissioner, Kate Jenkins, the current interpretation of the Act, ‘Has recognised the non-binary nature of gender identity since 2013. The guidance on how sporting organisations, their staff and volunteers can promote the inclusion of transgender and gender diverse people in line with human rights-based principles.' There is a small exemption that allows the exclusion of transgender people if it can be proven that their physical attributes provide an unfair advantage.

In other words, an Act that was specifically designed to protect the rights of women and girls in sport has been re-interpreted to allow biological men to compete against them. This is the law to which Steggall refers and with which Deves takes issue.

While Steggall argues that the existing legislation provides sporting clubs with the flexibility they want, women and girls are arguing that sporting clubs should not have flexibility but rather be forced to uphold a system of biological fairness in the interest of competitive sport.

Chandler and Deves are attempting to restore this legal protection, as was the intention of the Act, and throw out the re-interpretation that effectively discriminates against women.

“And saying that parents will be concerned (about the safety of women and girls competing against men) is just repeating a transphobia line,” insisted Steggall.

Steggall’s comments conflict with documented instances of women being harmed by transgender players. The issue came to a head with World Rugby banning transgender players due to ‘significant’ safety concerns in 2020. They found that biological women faced a 20-30% greater risk of injury when tackled by a transgender player that had undergone puberty. Its report stated:

“It is known that biological males (whose puberty and development is influenced by androgens/testosterone) are stronger by 25% to 50%, are 30% more powerful, 40% heavier, and about 15% faster than biological females. That combination of mass, strength, power and speed means that in a direct physical contest, ciswomen in all these domains will be at significant risk of injury.”

Their research concluded that biological men retained most of their physical advantages, even after medication.

“Transgender women may not currently play women’s rugby because of the size, force and power-producing advantages conferred by testosterone during puberty and adolescence, and the resultant player welfare risks this creates.”

Zali Steggall maintained on Sky News Australia, “If we’re really worried about the safety of women in sport, let’s talk about sexual harassment and intimidation.”

Ironically, women around the world have complained about feeling intimidated, unsafe, and uncomfortable being confronted by naked male bodies inside changing rooms and bathrooms. At least one woman was banned from her gym after complaining about the issue. “This is about me and how I felt unsafe. I should feel safe in there,” said the mother of two in 2015.

Meanwhile, at least one teammate of transgender swimmer Lia Thomas – who has been re-setting women’s records in recent months – spoke to reporters about the frustration that some women feel competing against biological men.

“It is definitely uncomfortable and has been expressed to our coach and members of the athletic department that people are uncomfortable with it,” said one of Thomas’ female teammates. “We were basically told to, ‘suck it up’.”

Thomas maintains male genitalia and is attracted to women, yet is allowed to mingle naked in the change room with female swimmers.

“Multiple swimmers have raised it, multiple different times. But we were basically told that we could not ostracise Lia by not having her in the locker room and that there’s nothing we can do about it, that we basically have to roll over and accept it, or we cannot use our own locker room.

“It’s really upsetting because Lia doesn’t seem to care how it makes anyone else feel. The 35 of us are just supposed to accept being uncomfortable in our own space and locker room for, like, the feelings of one.”