'It was on this conference call that Drs. Fauci and Collins were first warned that COVID-19 may have leaked from the WIV and, further, may have been intentionally genetically manipulated,' the Republicans' letter stated. 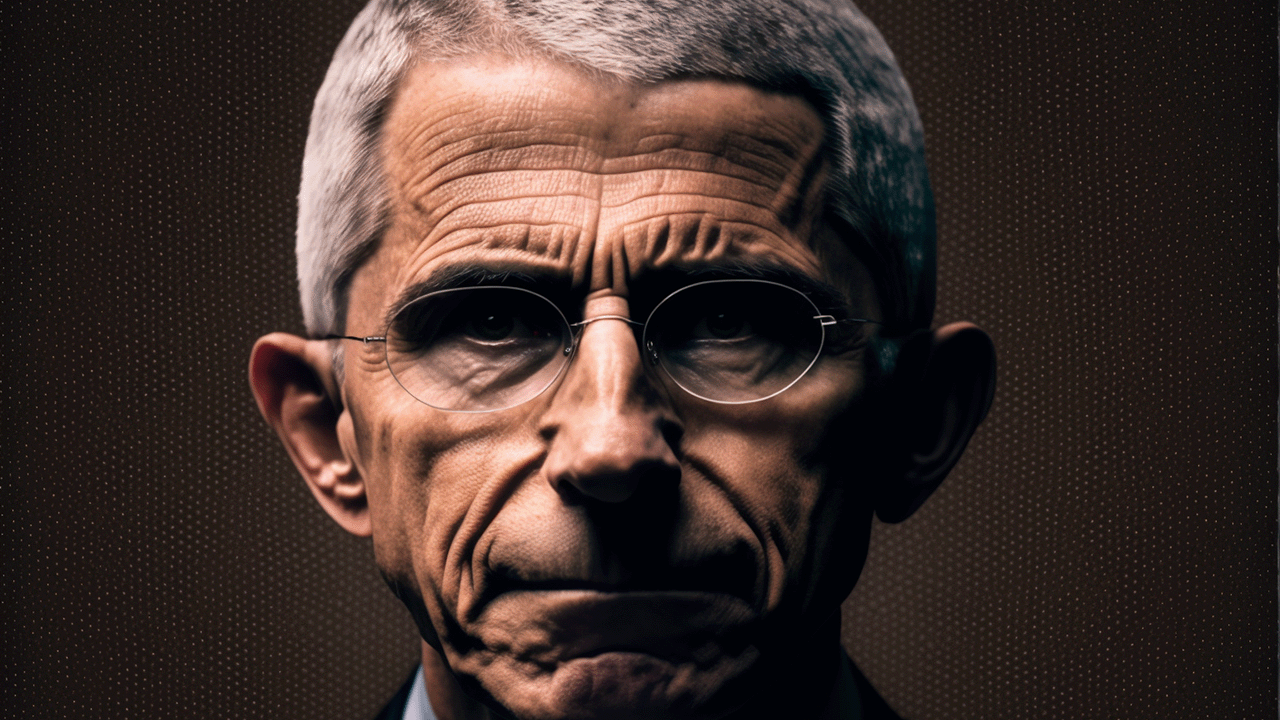 On Tuesday, GOP leaders from the House Oversight and Judiciary Committees made public excerpts from emails that they assert demonstrate Dr. Anthony Fauci knew that the novel coronavirus may have been intentionally modified and leaked from the Wuhan Institute of Virology.

Reps. James Comer (R-KY) and Jim Jordan (R-OH) stated in a letter to Health and Human Services Secretary Xavier Becerra that a conference call from February 1, 2020, was held between Fauci and the former National Institutes of Health Director Francis Collins. During the call, the two discussed the virus's possible source. Comer and Jordan claimed that the emails indicated Fauci was aware that the virus may have been altered and released on purpose from a lab in China.

"It was on this conference call that Drs. Fauci and Collins were first warned that COVID-19 may have leaked from the WIV and, further, may have been intentionally genetically manipulated," the Republicans' letter stated, Fox News reported.

The congressmen said that "it is unclear if either Dr. Fauci or Dr. Collins ever passed these warnings along to other government officials or if they simply ignored them."

Congressmen Comer and Jordan reported that an email exchange from February 1, 2020, contained notes detailing a conference call between scientists, four of whom wrote a paper titled, "The Proximal Origin of SARS-CoV-2" which they sent to Fauci and Collins three days after the call.

This paper did not argue that the virus originated from a laboratory. However, Comer and Jordan are now questioning whether the lab leak theory was dropped due to influence from Fauci and/or Collins.

They noted that it is unclear what new evidence or changes in underlying science took place during this short time period, but the authors apparently abandoned their belief that COVID-19 was the result of a laboratory leak after speaking with Fauci and Collins.

"It is unclear what, if any, new evidence was presented or if the underlying science changed in that short period of time, but after speaking with Drs. Fauci and Collins, the authors abandoned their belief COVID-19 was the result of a laboratory leak," Comer and Jordan said.

Notes from a Feb. 1, 2020 conference call, from Dr. Jeremy Farrar to Collins, Fauci and current NIH Acting Director Lawrence Tabak, stated that "a likely explanation" could involve "accidently creating a virus that would be primed for rapid transmission between humans[.]"

It is unknown if either of them edited the paper before it was published in Nature Medicine. During the call, Farrar discussed the similarities to a bat coronavirus and the very specific differences and stated he "just can’t figure out how this gets accomplished in nature."

To this, Collins replied that he was "coming around to the view that a natural origin is more likely". By April, Collins, Fauci, Tabak, and others were discussing a "very destructive conspiracy" referring to an article about the lab leak theory.

"I hoped the Nature Medicine article on the genomic sequence of SARS-CoV-2 would settle this. But probably didn't get much visibility," Collins reportedly said.

"I would not do anything about this right now. It is a shiny object that will go away in time," Fauci replied.

Reps. Comer and Jordan are now requesting information from the Health and Human Services (HHS) regarding whether Drs. Fauci and Collins warned anyone in the White House about the lab leak theory, if there was new evidence between February 1 and February 4, 2020 that led them to conclude it wasn't a leak, and if they edited the contents of the Nature Medicine article.

On Tuesday morning, the House Oversight Committee Republicans tweeted, "Time for answers. Dr. Fauci and Dr. Collins have some explaining to do." 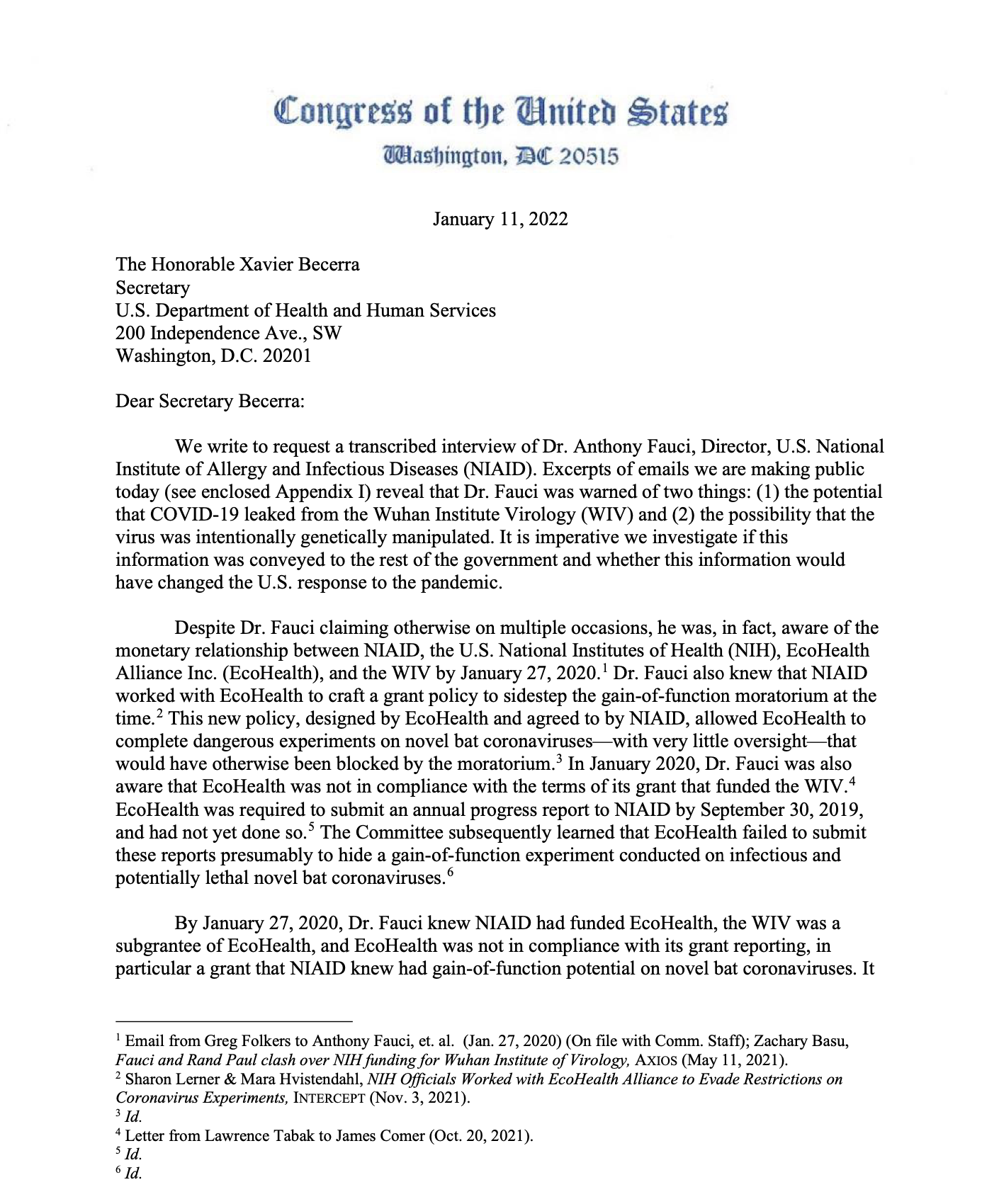