Ontario Progressive Conservative Premier Doug Ford has invoked a state of emergency in response to the blockade and threatened heavy fines and consequences. 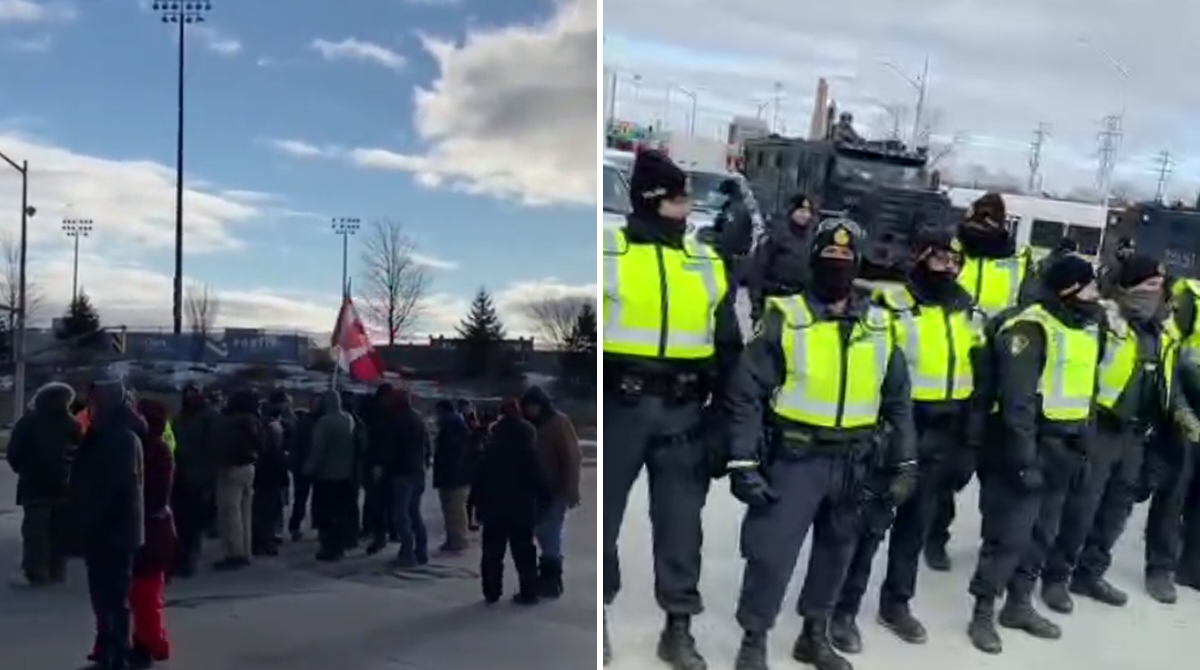 Rebel News reporters Isabelle Rivo and David Menzies are on the scene of an intense policed stand-off between protesters blocking Windsor, Ontario's Ambassador Bridge and dozens of heavily armed officers.

Police descend upon blockade at the ambassador bridge at the Windsor, Ontario border crossing.https://t.co/ys9Wa4SGV5 for more. pic.twitter.com/IlUarCOm8B

Protesters stand at the entrance to the ambassador bridge as police prepare to move in.

Rebel News reporters, however, were blocked from the bridge by police Saturday morning as reporters from mainstream media were allowed access.

I just spoke with our reporter David Menzies — he tells me police are blocking him from getting to the Ambassador Bridge. Reporters from corporate media and government media have been allowed through. I’ll let you know if this persists.

The bridge, the portal for over one quarter of all the cross-border trade between Canada and the United States, connects Windsor and Detroit. The bridge is the main route in the auto manufacturing supply chain and the blockade of the bridge is causing disruptions at several auto plants in US.

Protesters are blocking the bridge to oppose COVID-19 restrictions across the country, as part of a nation-wide protest movement that grew out of a trucker's convoy to Ottawa that was created to oppose cross-border vaccine mandates. The convoy to Ottawa in now entering its third week in the nation's capital where thousands of truckers and supporters remain in the streets.

Ontario Progressive Conservative Premier Doug Ford has invoked a state of emergency in response to the blockade and threatened heavy fines and consequences.

Premier Ford says his government is making these temporary emergency powers permanent in law. To help police "do what it takes to restore law and order," adding that "we must heal the divide that is fracturing society."

BREAKING: Fines for non-compliances 'will be severe' Ford said, with a maximum penalty of $100,000 and up to one year imprisonment.https://t.co/p8HqQtMil6

Prime Minister Trudeau echoed Ford's sentiments in a Friday press conference, saying all options were on the table to clear the bridge.

Responding to whether he'd bring in the military to clear convoy protests, Justin Trudeau says "we are a long way from ever having to call in the military," but noted that "of course, we have to be ready for any eventuality."

Despite threats from Trudeau and Ford, protesters did not disperse and remained throughout the night Friday.

Hours after Doug Ford warned of serious consequences for those staying at the Ambassador Bridge, instead of running home, more and more people are joining the blockade. https://t.co/ys9Wa4SGV5 pic.twitter.com/wMbasKBfeE

What the current scene is looking like here at the Ambassador Bridge blockade. This is the biggest turnout I’ve seen since I have been here. Looks like these people aren’t afraid of Ford. #AmbassadorBridgeBlockade https://t.co/ys9Wa4SGV5 pic.twitter.com/0GhidBGNRu

Rebel News will remain on the scene to provide live coverage you won't see anywhere else. To support our independent journalism, please visit www.ConvoyReports.com