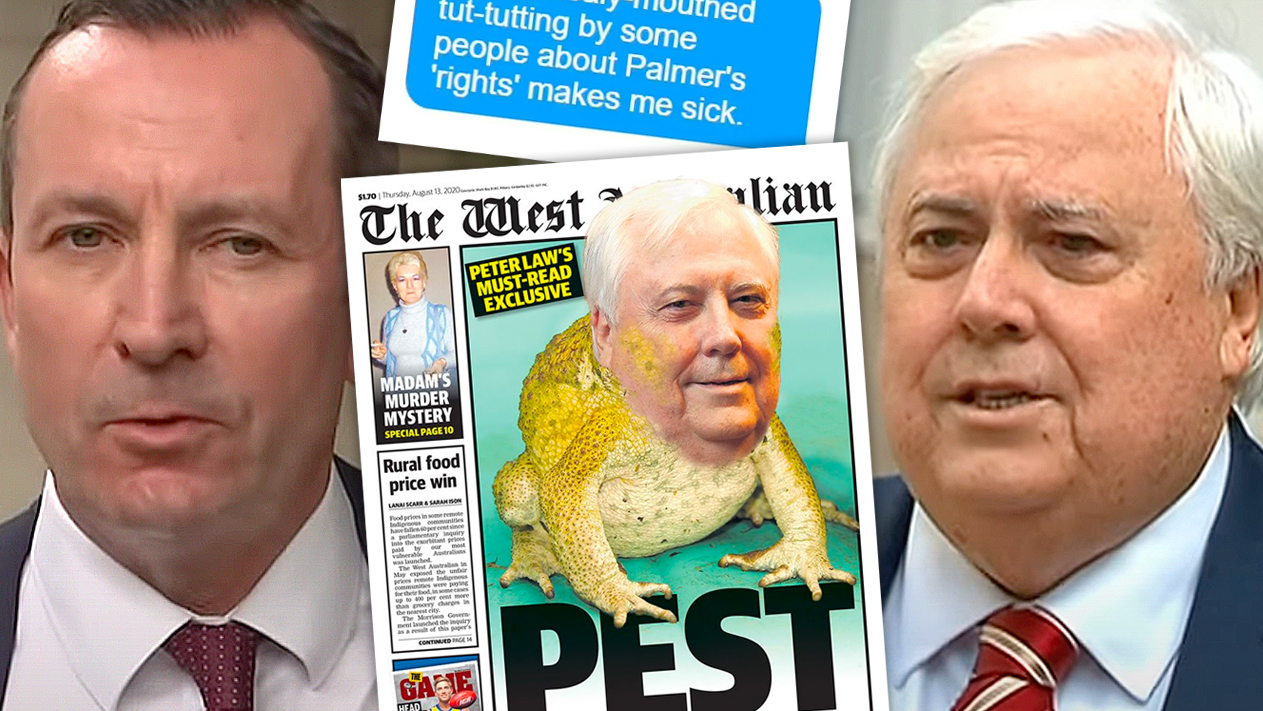 Text messages from Western Australia Premier Mark McGowan have revealed the extent of his dislike for billionaire and leader of the United Australia Party, Clive Palmer.

“He’s the worst Australian who’s not in jail,” wrote McGowan, on text messages shared with the court during the defamation trial taking place between McGowan and Palmer.

When McGowan was asked by the court to clarify if he was exaggerating with this remark, he replied, “I suspect there are worse Australians out there who are not in jail … people who have committed crimes and haven’t been found guilty.”

The pair have been locked in a fierce legal debate after McGowan publicly, from his position of power and privilege, labelled Palmer an ‘enemy of the state’ [of Western Australia]. Palmer decided to sue the Premier over his comments, which Palmer alleges have caused harm to his reputation.

McGowan is counter-suing, alleging that Palmer also defamed him. According to McGowan, Palmer’s comments led to citizen anger, requiring McGowan to have a security detail. McGowan has been the subject of angry protests from people who have lost their jobs due to the McGowan government’s decision to introduce widespread mandates and a campaign to lock unvaccinated citizens out of most part of society. McGowan has been ‘subjected’ to people shouting ‘anti-vaxx statements’ at him.

During a previous legal battle over a damages case raised by Palmer against the State of Western Australia regarding the former Liberal government’s refusal to review a mining application, McGowan’s government introduced and passed legislation to prevent Palmer seeking compensation. During this time, the West Australian ran an unflattering series of covers targeting Palmer, including depicting him as Dr Evil.

It is clear that McGowan enjoyed the support Western Australia’s only daily metro newspaper – a major advantage in what McGowan has admitted to be a ‘war’ with Palmer.

Text messages between Mark McGowan and Seven West Media Chairman, Kerry Stokes show the Premier first advising Stokes about the legislation and then thanking Stokes for the front pages, before finally complaining about Palmer.

When the legislation was introduced on the 11th of August, McGowan wrote to Stokes:

“Kerry, we just introduced legislation to block a claim by Clive Palmer against the state of WA for $28 billion. The claim was currently in arbitration and was based on two decisions Colin Barnett made in 2012. Barnett rejected a proposal by Palmer to develop the Balmoral South mine.”

Barnett was the former Liberal Premier of Western Australia.

McGowan did not want to risk paying Palmer billions of dollars and, instead of fighting the case on its merits, introduced legislation with the intention of preventing Palmer from challenging.

“Obviously he won’t be happy. I’ll go to discuss,” finished the Premier, suggesting that the conversation continued.

For the next few days, Stokes’ papers ran anti-Palmer front pages in support of the government which included Palmer being characterised as a cockroach and cane toad.

When the legislation passed, Stokes texted the Premier to congratulate him on the 14th of August.

“Mark, well done. I think no-one else could have achieved the legislation in the speed you did. Reckon the insect heads should make a telethon sales item. People are with you! Kerry.”

To which McGowan replied:

“Thanks Kerry. I was asked about those marvellous front pages today, and I said, ‘I think The West has gone a bit soft’. I appreciate the support enormously. All that mealy-mouthed tut-tutting by some people about Palmer’s ‘rights’ makes me sick.”

Asked to clarify that comment in court, the Premier said that he was ‘sickened’ by the $30 billion claim and the political commentary on various Sky News Australia programs that supported Palmer’s position.

“I don’t like Mr Palmer. I can’t stand what he does,” added McGowan, in another message.

The remarks matter in context because McGowan has admitted that at least some of his public comments – including calling Palmer an ‘Olympic-scale narcissist’ and ‘Australia’s greatest egomaniac’ – were not only defamatory but made with the intention of swaying the federal government’s position against Palmer’s damages case.

The trial has not only revealed the Premier’s dislike of Palmer, the Western Australian Attorney-General John Quigley also called Palmer a ‘big fat liar’ whom Quigley looked forward to dumping on in a ‘statesman-like way’. Quigley signed the legislation preventing Palmer from suing the State into law.

More importantly, the text messages between Quigley and Palmer appear to show the two working out how to draft legislation specifically to stop Palmer’s case.

In particular, Quigley expressed his intention to create a ‘legislative Trojan Horse’ that would include an amendment that would be, according to Quigley’s texts, ‘a poison pill for the fat man’.

The shocking comments were probed by the court, which further revealed that McGowan broke his promise of transparency to ensure that Palmer was not given the opportunity to interfere legally with the Bill before it was passed.