The protest, which was staged to disrupt Amazon’s Pride-focused flag-raising ceremony, saw around 30 employees drape themselves in transgender Pride flags and lay on the ground to play dead. 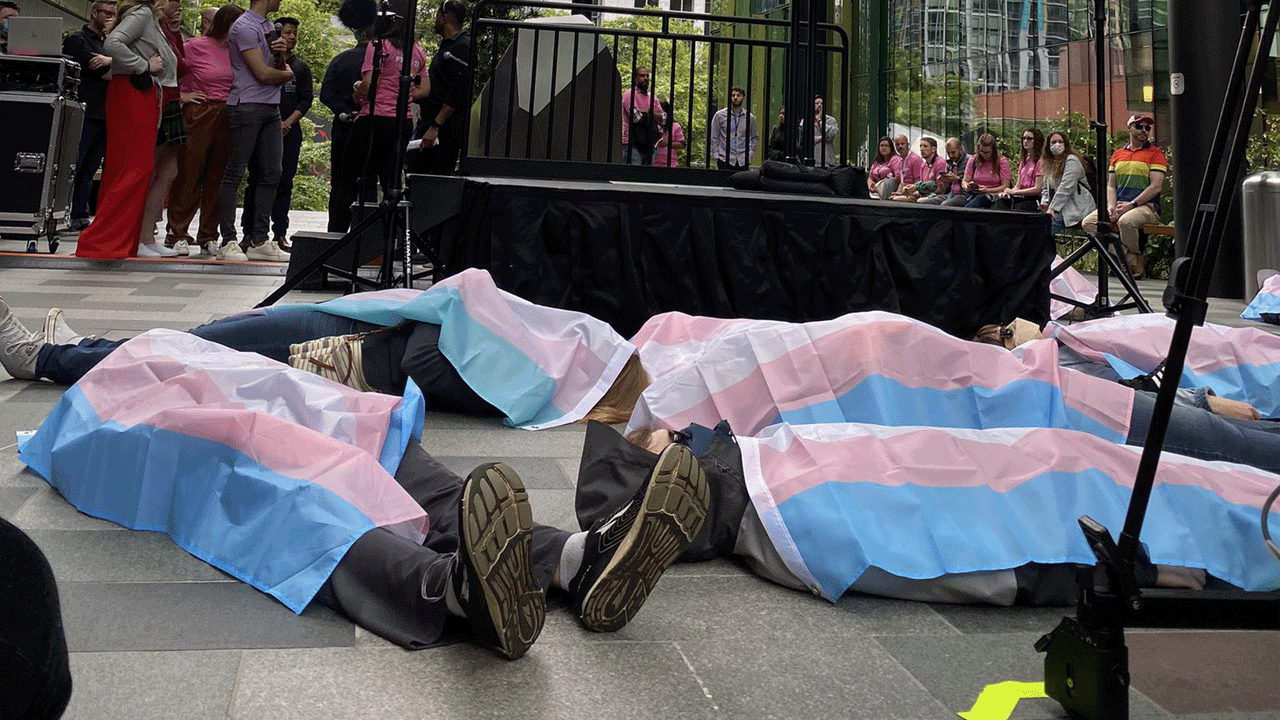 Dozens of Amazon employees in Seattle staged a protest at the company’s headquarters on Wednesday to protest the online retailer's continued sale of so-called “transphobic” materials, including books by Daily Wire writer Matt Walsh and Abigail Shrier, the author of “Irreversible Damage: The Transgender Craze Seducing Our Daughters.”

The protest, which was staged to disrupt Amazon’s Pride flag-raising ceremony, which was conducted to commemorate Pride Month, saw around 30 employees draping themselves in transgender Pride flags and laying on the ground to play dead.

The so-called “die-in” protest was cataloged by Business Insider journalist Katherine Long, who took photographs and footage of the flag-raising ceremony.

I’m at Amazon’s Seattle headquarters, where about 30 Amazon employees are staging a die-in during Amazon’s Pride Flag raising ceremony in protest of the company’s continued sale of what they say are transphobic books. pic.twitter.com/Pz0Pyy0Mzi

As detailed by Long, the employees are affiliated with an internal employee activist group called “No Hate at Amazon.”

When Amazon security confronted the protestors, several of them refused to move and got in a verbal altercation with the guards.

What appears to be Amazon security attempted to halt the protest, which is taking place in a public breezeway between two Amazon buildings. Protestors refused to leave. pic.twitter.com/ypkcYNGmvy

Protesting Amazon's sale of transphobic content is "a risk that a lot of us are willing to take because we can't continue to work for this company and turn a morally blind eye to its policies," one longtime Amazon employee at the protest told me.https://t.co/RZhNIctbkY

The transgender activists gave a speech at the flag-raising ceremony to explain the reason for their protest, which they claim was rooted in Amazon’s “spreading a culture of hatred through the sale of transphobic books, promoting and profiting off content that advocates for the abuse of transgender children.”

The activists, who are employees of Amazon, slammed their employer for performing a “PR stunt” with its Pride flag-raising ceremony. The group insists that the ceremony was “blatant rainbow-washing, and all done for show,” as the retailer sells “content that aids and encourages the psychological abuse of transgender children.”

“There is a direct line between the hateful transphobic rhetoric Amazon is profiting from, the unprecedented anti-trans legislation across the United States, and the violent and often deadly physical attacks so many of our community face,” said the group in an open letter. “2021 saw the most murders of transgender people in recorded history. Overwhelmingly, these victims are Black trans women and trans women of color.”

The group cited a number of official titles that they want to be banned from the retailer, including Abigail Shrier’s “Irreversible Damage,” and Matt Walsh’s “Johnny the Walrus.”

Furthermore, the open letter published by the activists references a video of two Amazon employees hosting an internal meeting discussing the success of Walsh’s book on the website, in which they accused the author of abusing Amazon’s systems, claiming he is “taking advantage of Amazon and how the Amazon algorithms work to promote their particular brand of hate and harm.”

The letter asks: “Can you imagine the fear of transgender employees at seeing their coworkers’ identities plastered over conservative media? At seeing the names of fellow employees handed to a transphobic internet mob, wondering if they would be doxxed next?”

“Walsh used the publicity from this attack to get his book to number one on Amazon. Let me repeat that. The number one book across all of Amazon. Top of our charts,” it says.

“In Walsh’s own words, this effectively made him the bestselling author in the country. Amazon rewarded him for this harassment with enormous sales. Money he will use to keep spreading hate. This is f***king embarrassing. Everyone who let this happen should be embarrassed and ashamed,” said the trans activists.

The speech also mentions Walsh’s newly-released documentary, “What is a Woman?” and their apprehension towards its release.

“Matt Walsh is not some random transphobe on the internet. This man is a serial abuser who has openly attacked our coworkers and our customers, and it will happen again if Amazon does not act,” the activists said.