In a post on Twitter, Freeland expressed her solidarity with the people of Ukraine while she was holding a scarf of a neo-Nazi group before promptly deleting it after numerous replies pointed out the significance of the scarf’s colours and its words. 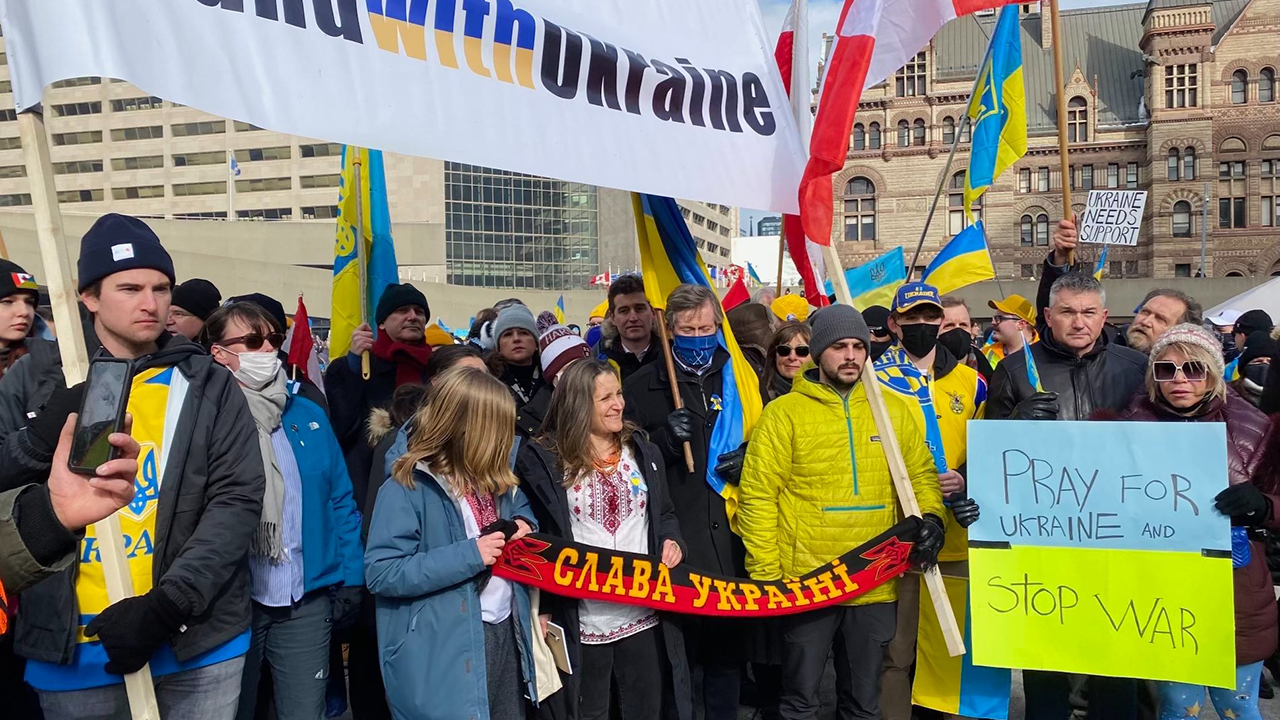 Canadian Deputy Prime Minister Chrystia Freeland on Sunday participated in a rally for Ukraine where she held up a red and black scarf tied to Ukraine’s neo-Nazi movement of Banderites.

In a post on Twitter, Freeland expressed her solidarity with the people of Ukraine before promptly deleting it after numerous replies pointed out the significance of the scarf’s colours and its words “Glory to Ukraine” written in Ukrainian.

Sanitized for your enjoyment pic.twitter.com/CAaAMaoXdq

As detailed by numerous social media posts, including those written by True North writer Candice Malcolm, “Freeland can scrub her own social media to her heart’s content, but her photo holding the red and black banner is making the rounds on social media and is being used on other news sites, including NPR.”

Are we supposed to believe that Chrystia Freeland is ignorant to the historic Red & Black association with the nationalist paramilitary Bandera movement? Wouldn't a savvy journalist and astute international player know not to take or post a photo with this scarf? pic.twitter.com/s8R2N5Vvyw

Other individuals captured at the event are understood to be members of the neo-Nazi organization Right Sector, who held up photographs of Stepan Bandera, a national-socialist Ukrainian politician during the Second World War accused of committing war crimes against Jews and Poles. Bandera organized the UPA, or the Organization of Ukrainian Nationalists.

After Freeland deleted the post, she published a new tweet with the same caption, but with a new picture without the presence of the red and black scarf.

Freeland, who serves simultaneously as the country’s deputy prime minister and minister of finance, and was previously minister of foreign affairs, is of Ukrainian-Canadian descent — prompting many to question why she, who studied internationally in Russia during the late 1980s and appears to have more than an average grasp of European history, would be willing to be photographed with paraphernalia associated with the hate group.

As detailed by the Ottawa Citizen, “Freeland’s granddad was, indeed, a Nazi collaborator” in Ukraine.

Freeland’s grandfather was the chief editor of a Nazi propaganda publication during the Second World War.

A 2017 iPolitics profile on Freeland, even noted the Bandera movement. “Some voices close to the Kremlin will predictably disparage Freeland’s appointment. In addition to being a critic of the current Russian government, she is also of Ukrainian heritage; some Russian voices like to accuse Canada’s government of being in thrall to a powerful Ukrainian diaspora. (In 2015, a spokesman for the Russian government-owned oil company Rosneft claimed that Canadian sanctions against Russia’s energy sector were inspired by 'pro-Bandera' lobbyists. Stepan Bandera was an anti-Soviet Ukrainian partisan who was allied with Nazi Germany for some time during the Second World War.)”

The picture comes after only weeks ago, Prime Minister Justin Trudeau and the media were quick to label the trucker Freedom Convoy “Nazis.” Trudeau even accused a Jewish Conservative MP of standing with "people who wave swastikas."

As previously detailed by Rebel News, Freeland ordered for the “Freedom Convoy” protesters’ bank accounts to be frozen.