Were our great-great-grandparents better at handling the Spanish flu pandemic a hundred years ago? 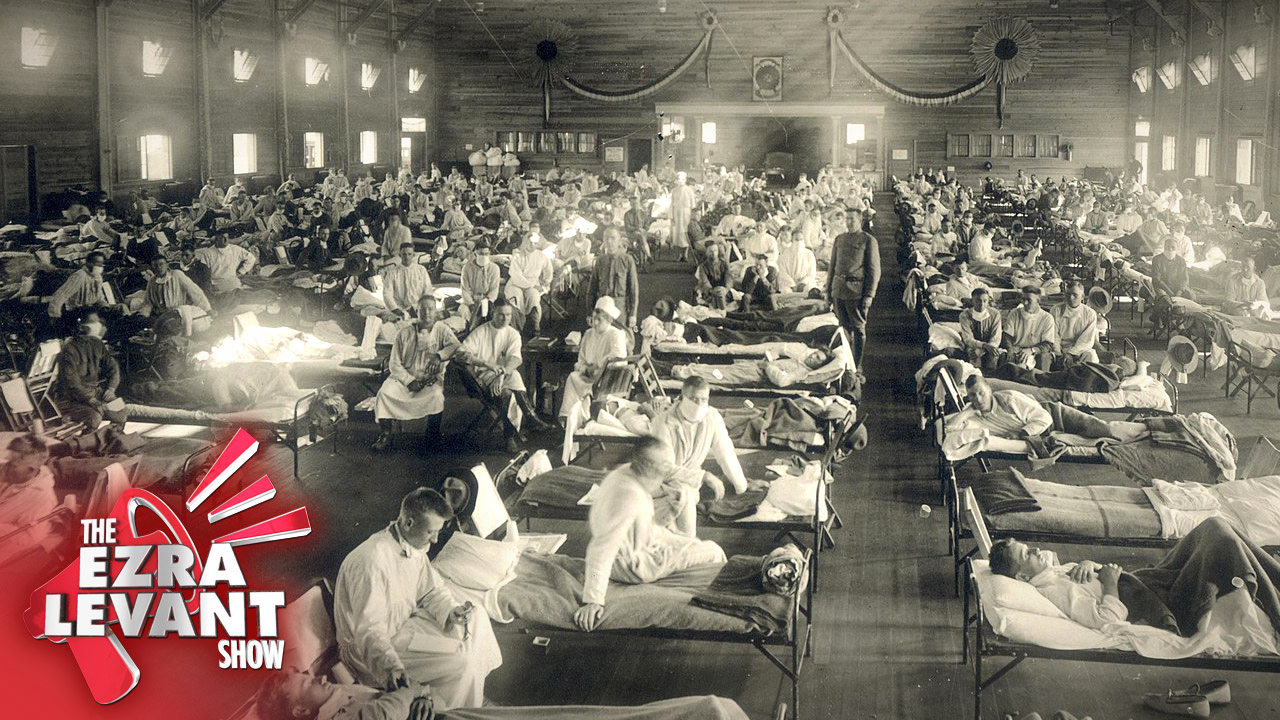 The closest thing to a plague that’s ripped through Canada was the Spanish Flu back in 1918-1919.

The Spanish Flu was so deadly — about 50 million deaths worldwide. Soldiers coming home from the Great War, cooped up in poorly-ventilated ships across the ocean. About half a million died from the Spanish Flu in the United States, and 50,000 in Canada — out of a population of just over 8 million Canadians. That’s proportionate to more than 200,000 dead today.

It looks like we’re past the worst of the Chinese virus by now, and the total death toll in Canada is just over 2,500. So I know it’s incredible to say it, but the Spanish Flu was nearly 100 times as deadly. Or phrased another way, what we’re going through — for whatever reason — is only 1 per cent as deadly.

TONIGHT I'll show you the difference between the way authorities responded then, and today.

1. Go to bed directly when you feel symptoms.
2. Go to bed in a room not occupied by a person who is well.
3. Take a drink of ay kind as hot as possible
4. Take light diet.
5. Don’t depress yourself by looking at the bad side.
6. Remember the large majority of persons who take ill get well.
7. Only one member of the family of the house should visit the patient’s room.
8. Don’t allow people to come into your room
9. If no doctor has prescribed for you, take ammoniated quinine in a half to a teaspoonful dose in plenty of water every four hours.
9. Add one teaspoonful of boric acid or borax.

They really emphasized an outdoor sunshine treatment — the patients were laid in the fresh air, their faces exposed to the sun.

So, that’s pretty much opposite to the orders of every politician in Canada — don’t go to the park; we’ll arrest you if you walk your dog or go out and get sunshine.

And we can see the cooped up in a closed space — the seniors homes — is where a lot of the deaths happened.

I mentioned the advice from New Zealand to take quinine water. You probably know quinine water by its commercial name — Tonic water. It’s got that bitter taste. Gin and tonic — that’s the quinine. If you can believe it, it’s an anti-malaria medication.

Of course, when it’s prescribed, it’s in pill form. One quinine-based medicine is hydroxychloroquine. And wouldn’t you know it — that’s what Trump suggested taking in a tweet, and a press conference, and so the Trump Derangement people immediately said he was a fool, and spent a month disparaging the medicine.

And bleach — you saw that, the recommendation to use boric acid or Borax. They were mocking Trump for that, too.

And sunlight — Trump was talking about that the other day, too. The media laughed and laughed at him. Trump is so stupid, imagine actually suggesting sunlight and fresh air and borax. Does he just make stuff up?

Yeah, no. Check out this video from a biosciences research group affiliated with Cedars-Sinai.

That seems to be what Trump was talking about. He wasn’t prescribing it. He said he was interested in learning more and he sounded hopeful.

To be candid, I think that the relatively low death toll today isn’t a function of anything that public health bureaucrats did, or politicians, and certainly not police telling people they can’t walk their dogs or sit in the park.

But here’s also what I know: our great-great grandparents didn’t use the excuse of the virus to send the country into a Great Recession, or to arrest people for leaving their houses.

NEXT: Marc Morano of ClimateDepot.com joins me to talk about Michael Moore's new documentary, Planet of the Humans. (You can watch it for FREE here.)

What the controversial filmmaker has to say about so-called "green" energy might surprise you.