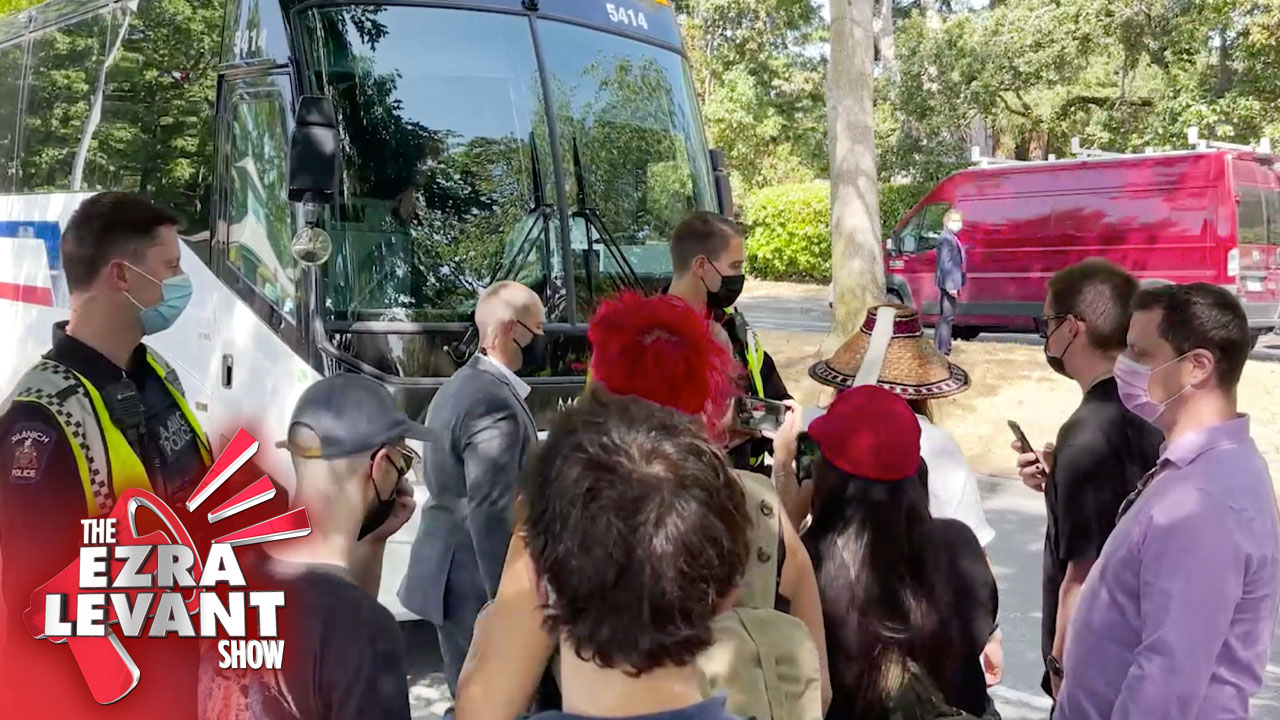 You know that the candidates rent these big planes and buses for their election campaigns, put a huge decal on them, and then their campaign staff and different reporters travel around together.

But they won’t let us in. So we’re not on the inside. So we report from the outside — but we always have more interesting news than from the inside.

So here’s my story.

One of our young reporters, he’s 22, Mocha Bezirgan, is originally from Turkey. In Turkey he was interrogated at the police station twice, as a teenager, because he made YouTube videos that criticized the authoritarian regime there.

So you’ve got a bunch of journalists on the bus. And you’ve got Mocha off the bus. And they meet. But would you look at this: there are some protesters there too! A bunch of them! An anti-lockdown, anti-vaxx protester! But also environmentalist protesters! And also, Indigenous protesters!

On tonight's show, I'll play a few minutes of the protest and tell you how Mocha described the incident on to phone to me.

So instead of having his armed guards move the protesters, Trudeau just killed time for 30 minutes. Did other things. Improvised.

And they finally left.

So Mocha had the story of the protest — and we put up a tweet about it, with a short video. It was news — Indigenous protesters blocking Trudeau in British Columbia.

Fair enough. It happened. Like I say, there were protesters there from the left and the right.

But then David Akin, a Unifor journalist whose own union dues go to run ads attacking the Conservatives, he weighed in. He said that it was a lie, and that left wing and right wing journalists lie — it’s just him and the rest of the insider media who are honest.

So what’s going on here? Is David Akin a full-out liar?

I don’t think so. I know David — he used to work with me at Sun News.

I don’t think he’d lie so brazenly. So what happened?

I think I know. I think that the Liberals, when they saw their bus was blocked, they improvised. They said they were having so much fun at the event, they were going to extend it by half an hour. And they herded the media, the managed them, they massaged them, they kept them away from the blockade until it was over.

In fact, that’s what Akin says — but he doesn’t realize it was to trick him!

Akin says he left late because Trudeau was spending so much time with seniors! And you know we’d never bury a story like that!

I don’t really blame David Akin, my old friend, for believing a lie.

But I do blame him for believing in the lie so deeply that when other outsiders prove it’s a lie, instead of changing his mind, he lashes out, calls us fake, calls us liars, and shows that, indeed, he is a Unifor man, he is an insider. And he’d rather promote a Trudeau lie than tell the truth that was first reported by outsiders like us.