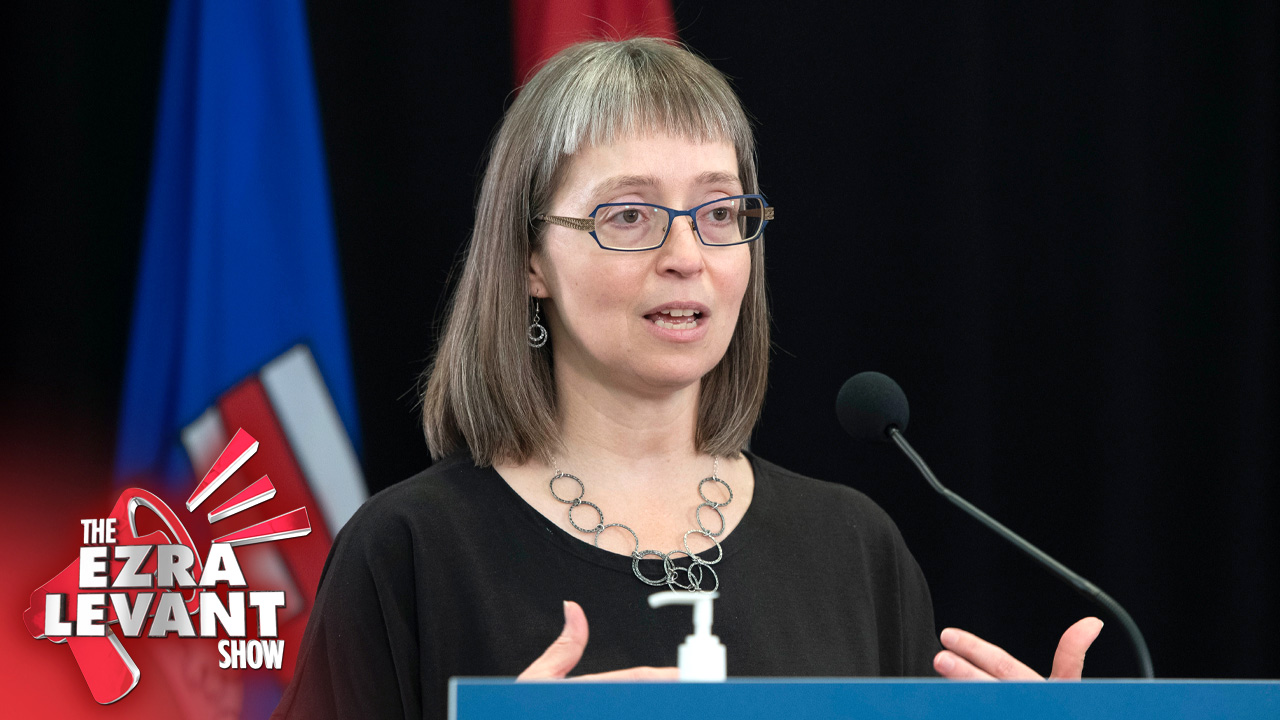 It’s election night in Alberta — for city councils, for a senate election and for an equalization referendum. The last two of which are not binding — they’re more plebiscites, as the technical term is. An impressive opinion poll. Both of which will surely be ignored by Ottawa.

For the first six months he had the lightest touch; but now he has flip-flopped the other way. It’s him who’s jailing pastors, though that has now spread to New Brunswick. Kenney held out for so long — and then, like a slingshot, he snapped back the other way, harder than anyone.

If you’re a very overweight 85-year-old who has had a heart attack and kidney failure and a stroke, you’re at risk, for sure. But seriously, that is a typical victim — three serious underlying conditions.

People know that now, which perhaps we didn’t know in March of 2020. Which is why this flip-flop by Kenney is so hard to take. And the biggest flip-flop of all is on the vaccine passports. Kenney a few months ago crossed his heart and swore they wouldn't come to Alberta.

So how does he justify it? Well, he can’t, really.

The stats just don’t show that there’s a crisis, sorry. So they need hype. They need drama. So they have a big show of Justin Trudeau having to send nurses to help out Alberta. I think they sent seven nurses. There are nearly 36,000 nurses in Alberta, so all those seven nurses will do, really, is let Trudeau be smug about how he’s doing Alberta a favour; and it will let Kenney pretend there’s a crisis going on.

Anyways, the drama is needed, to keep people panicked, to justify the civil liberties violations.

And that is my video today — four lies told by Alberta’s health deep state.

And I've just told you my explanation for why: it’s so that they can excuse and justify their shocking and unjustifiable decision to lock down hard, bring in forced vaccines, and break every promise they ever made.

Here’s the first lie. I was startled by this: Alberta’s health bureaucrat, Deena Hinshaw, announcing that they would start counting people who stayed home sick from school as COVID cases, even if they had no information about them. So, if you stayed him because you had a cold, or because you twisted your ankle, or if you had any reason at all, but didn’t give an official reason, you would be counted as COVID. I’m serious, that sounds nuts, but she said it.

Yeah. You weren’t supposed to say that part out loud. And when people like me reported that, they called US fake news — yeah, no, sorry sister. You said it.

There’s a story that Trudeau's CBC state broadcaster did with Kenney’s state health department. So, two branches of government working together. Looks like a crowded ICU room, right?

Well, a keen-eyed viewer spotted it — that’s a mannequin. That’s literally a mannequin, a dummy. It was fake. It was a hoax. The CBC actually half-apologized for it — but not the Alberta government.

Again, they both have an agenda — keep you afraid; keep you in control. And in Kenney’s case justify his flip flop.

I think by far the worst was this one: That same Deena Hinshaw, the one who announced that she was going to mark anyone sick at home as having COVID, no matter what, she said that a 14-year-old child had died from COVID.

Shocking. And it would be very rare — kids are at an extremely low risk of all this. But she said it. A 14-year-old died.

Except, that 14-year-old’s family was shocked and outraged by the lie, that their child was being turned into a partisan political weapon.

Three days, three lies, all in the same direction. All the lies with the same purpose.

They’re in full damage control. They’ve launched a special propaganda campaign to try to shore up their reputation — I think it’s too late for that.

I think the whole expert class has lost vast swathes of credibility during the pandemic. But here, watch this video by a doctor who says that rumours about the vaccines hurting your fertility are fake news. This is from a government tweet:

“When you weigh the potential risks of getting COVID-19 against the non-existing, not-supported-by-any-evidence misinformation [about the vaccine], there really is no reason to pause & wonder about this,” says Dr. Jack Pang. “Go ahead & get the vaccine. It’s as simple as that.” pic.twitter.com/F7PzM7dU6U

The FDA, the U.S. food and drug administration, has ordered vaccine makers to continue testing them until the year 2027. So, six more years of clinical trials are scheduled. That’s normally how drugs are done.

So, it may be true that there is not yet any evidence that these vaccines hurt fertility; but it is equally true that the evidence is not yet in; and I would think the onus is on the government that’s forcing you to get vaxxed to prove something is harmless; you don’t have to prove a mystery vaccine is harmful.

But let’s take it for what it is; this doctor says there’s no proof that vaccines harm your fertility. You heard him. That’s what he said. Fertility. A nine-letter word, four syllables. You can say it one and a half seconds.

So that’s what the doctor said.

But look at what the Alberta Health department tweeted:

“When you weigh the potential risks of getting COVID-19 against the non-existing, not-supported-by-any-evidence misinformation [about the vaccine], there really is no reason to pause & wonder about this,” says Dr. Jack Pang. “Go ahead & get the vaccine. It’s as simple as that.”

Did you see the difference?

Dr. Pang said, that whole the-existing, not-supported-by-any-evidence misinformation thing was about fertility. Not about about the vaccine in general. We know the vaccine has side effects. We know it causes myocarditis, especially in young males, at a disturbing rate — according to some studies, it’s six times more likely to put a young man in the hospital than the virus itself.

So we know you can’t say that there’s no evidence that vaccines can harm you. No-one would be foolish enough to say that, certainly not Jack Pang. He just said there’s no evidence that it causes infertility. But the government edited his words, to replace them — that’s what those square brackets are. They literally put their own words in to replace his words, because he didn’t lie like they wanted him to.

They replaced the word fertility with the words “about the vaccine”. It’s not shorter. It’s not plainer. It didn’t clarify or simplify, as edits should do. It literally changed the meaning of the doctor’s own statement.

How many “journalists” in the mainstream media would report the truth and expose the lies? I mean, do you think the CBC “reporters" who filmed the mannequins are going to tell the truth?

GUEST: Kelly Lamb (@LittleGoatCR on Twitter) joins to talk about the state of policing in Saskatchewan.