One media outlet is more hated by the government than Rebel News. And maybe they are more courageous, too. 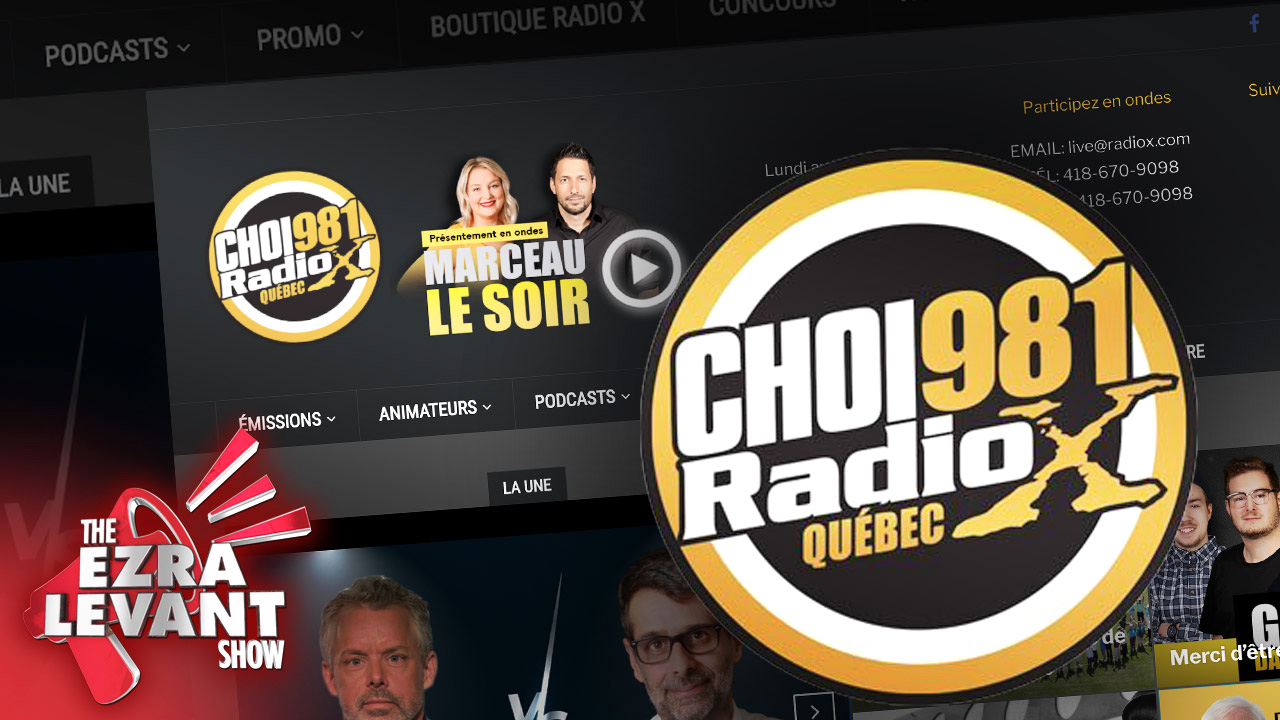 I’ve often said that Rebel News is the most censored news network in Canada.

It is partly because of me, personally — I’ve been the target of government censorship for more than a dozen years, ever since the Alberta human rights commission prosecuted me for publishing the Danish cartoons of Mohammed. And I just didn’t go quietly.

But things like that have been happening more frequently these days. Not just to me, but to our reporters.

Yet honesty compels me to tell you that there is actually a media company in Canada that I think may be more censored than us, and more hated than us. And just as beloved as us, by the people.

The reason you probably don’t know about it is because it’s a French-language radio station in Quebec City, called CHOI-FM, or Radio X.

They have been getting in trouble for twenty years. In 2004, the CRTC wanted to shut the station down, like we’re in the Soviet Union or something, after 47 losers complained about abusive comments, offensive on-air contests, personal attacks and harassment, all aired on the station's daily program during peak morning hours.

When word got out that the government was going to shut down the station, the city was outraged: 50,000 citizens marched through the streets of Quebec City, the largest protest since the 1960s. They also had a massive protest on Parliament Hill.

The CRTC backed down. Far from killing CHOI-FM, it propelled them to new heights. One of the radio hosts, Andre Arthur, was even elected as the local MP as an independent, crushing all the other parties after spending less than $1000 on his campaign.

Which brings me to today’s story, which I've translated using Google:

"The City of Quebec is putting an end to its advertising purchases on CHOI Radio X, considering that the station "constitutes a danger to public health.'”

So ideas are now a danger to public health? That’s what they said in the Soviet Union, too; If you disagreed with the state, you were mentally ill.

"By their choice to promote opposition to health measures, the owners of this radio station are endangering the health and potentially the lives of the citizens of Quebec and elsewhere," reads a press release from the City.

“Under the guise of the idea of ​​freedom of opinion, this organization promotes ideas opposing health measures,” adds the City.

Isn't it the role of the media? To report the news, but to be skeptical of governments, especially in times of crisis? Especially when parliaments are prorogued or cancelled and courts are shut down and everybody is acting like sheep?

"Two columns published in quick succession in the Journal de Quebec last week accused the station of sustaining conspiracy and anti-mask discourse. The hosts defended themselves on the air from doing so, assuring that they had the right to be critical of the government's management of the pandemic."

That’s called a debate. You can be pro-mask and you can be anti-mask.

(Here's the Centers for Disease Control's big study on masks, published at the height of the pandemic. They reviewed 14 scientific studies, and found the results "did not support a substantial effect on transmission of laboratory-confirmed influenza" through wearing masks.)

So the City of Quebec says it will no longer buy commercial advertising time on CHOI-FM, to run those public service announcement about, say, road safety.

They’re literally cancelling real public health ads to punish someone who disagrees with them about masks, about public health theatre.

But this takes the cake:

I haven’t heard this ad, but it sounds like it called listeners stupid — you know, “yahoos,” as Doug Ford says, “covidiots”, whatever. Of course the station refused to broadcast it!

CHOI-FM, Radio X, is being punished for daring to criticize the government.

Can you let me know if you see anyone — you know, the CJFE, CAJ, Pen Canada, RSF, CCLA — or any politician, or any journalist, stands up for their freedom of the press, their right to dissent?

NEXT: Our reporter Keean Bexte was attacked by an Extinction Rebellion climate change extremist in Ottawa last week. We put out a call at FindTheThug.com and were immediately inundated with tips on the culprit's identity. Keean joins me tonight to talk about what we've learned about this man, and our plan to charge him with assault.