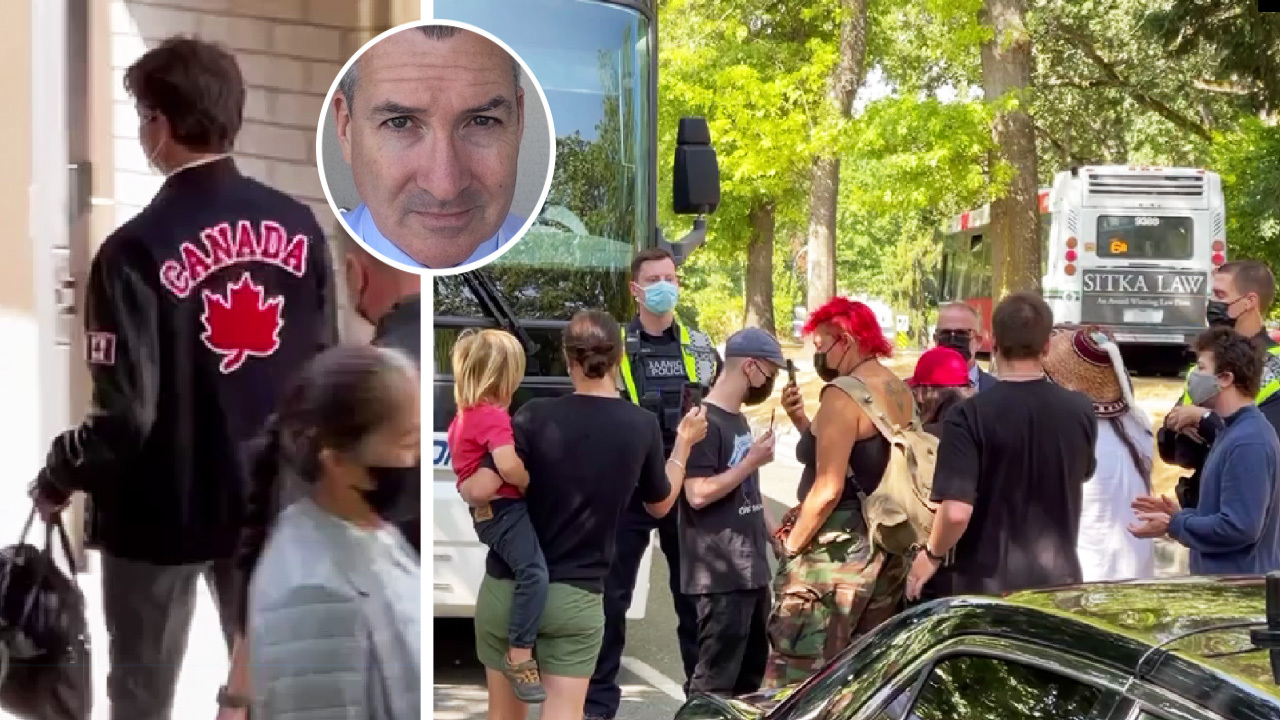 You think right wing news outlets stretch the truth? How about this whopper from a left wing advocacy group? Complete fake news. I was there. No helicopters were harmed during Trudeau’s stop in @ElizabethMay ‘s riding. https://t.co/zNIEHtAnFM

Trudeau was in Victoria, B.C., for an August 19 campaign stop. Rebel News Chief Videographer Mocha Bezirgan was at the event where he captured video of the Liberal campaign bus being physically blockaded by Indigenous rights protesters and heckling Trudeau as he entered the bus after the rally wrapped up.

Prime Minister Justin Trudeau had his bus blocked by indigenous rights protesters on Vancouver Island. After blocking his bus for about 35 minutes, the PM was evacuated from the bus by security. Full story coming soon, help support our election coverage at https://t.co/fdkjuK9jBt pic.twitter.com/i009f8mguu

The blockade resulted in the prime minister being evacuated from the bus after at least an approximate 30-minute delay. Trudeau left the bus wearing a black jacket and was escorted back into the event area with his personal RCMP security detail following suit.

The full video report is coming soon, however, the written report was published just hours after the incident, along with supporting video. You can read it here in full.

On Saturday, bailout-recipient journalist for Global News, David Akin, tweeted that reports of Trudeau’s bus being blockaded was “complete fake news,” adding that the campaign bus was “not blocked ever.”

His bus was not blocked ever at any event I attended in the last week.

In response, Mocha Bezirgan published a long-form video time lapse from his two-camera shoot. His video documented the protest which disrupted the Liberal campaign bus for around 30 minutes.

You are not telling the truth. I was there and I recorded them blocking the bus for half an hour. At times I recorded with both of my hands. I interviewed them. I asked Justin why he wouldn't engage with them. I'm not fake news. Where were you when this was happening? https://t.co/nbt3Oil6fd pic.twitter.com/nKePPXIpLV

Other Rebel reporters chimed in on Akin's remarks.

You are fake news.

It takes young Chief videographer @BezirganMocha to show Canadians the real truth, not from you inside the Liberal lackey bus.

You are fake news, David.

We had a videographer on the scene capturing several minutes of footage of Trudeau's bus being blocked by indigenous protesters which is something that you didn't even think was newsworthy.

Doing what it takes to keep your spot on the bus I guess. https://t.co/0RLcPG9l8V

Bezirgan finally asked where Akin was on that day and why Akin didn't come outside of the Liberal media bus to report on the news himself.

There was a dozen journalist there yet none of them told you that Justin Trudeau's bus was blocked for HALF AN HOUR. But they refused to show this to you. https://t.co/cUcnqs1L6H

The chief political correspondent for @globalnews lied that Trudeau’s bus being blocked was “fake news”. Once I called him out and published a time lapse of the half an hour long incident, instead of a retraction, he blocked me. pic.twitter.com/UHdjtT0Oh2

Go to RealReporters.ca if you want to support Rebel's coverage of the election. You know you will get stories what the corporate press won't report on.