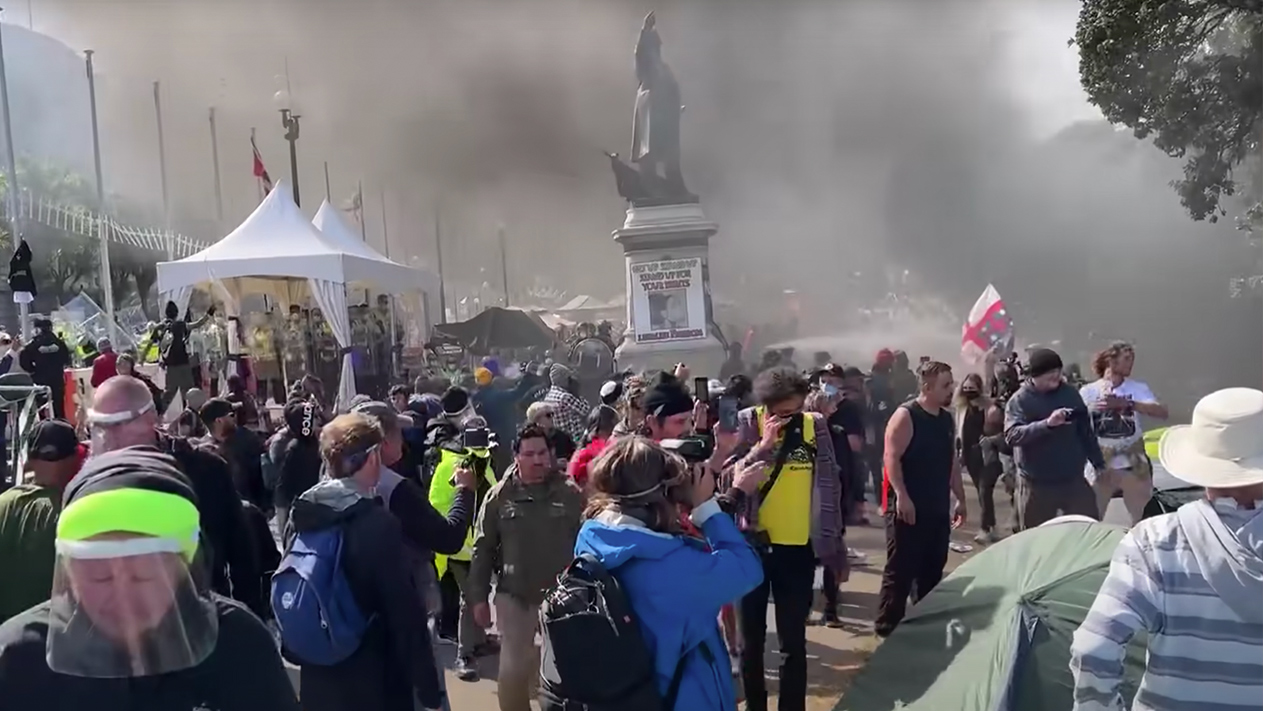 New Zealand Prime Minister Jacinda Ardern says that she is ‘saddened by the scenes’ but does not want them to define New Zealand’s response to the Covid pandemic.

87 people were arrested outside New Zealand’s Parliament in Wellington on Wednesday afternoon during a heavy-handed police operation that has drawn wide criticism.

Public transport was shut down to control the flow of protesters.

Hundreds of anti-vaccine mandate protesters had been camped directly outside Parliament for over four weeks, refusing to move until their demands to release New Zealand from Covid vaccine mandates were met.

Despite nations around the world beginning to drop vaccine mandates and Covid health orders entirely, Ardern sent in hundreds of police in full riot gear.

I don’t see Putin treating Russian anti-war protesters like that.

Jacinda Ardern is a disgrace.

After crowds were manhandled and intimidated by the police response, the situation deteriorated with scuffles breaking out between protesters and the police in which objects were thrown – such as bricks – and protesters were hit with riot shields, water cannons, and pepper spray.

Protesters built barricades to keep police from removing them and fought back as waves of police entered the area and started tearing down tents and signs. Police towed vehicles away while a battle of sorts broke out between the two sides. Both police and protesters were injured.

New Zealand police move in on Freedom Convoy outside parliament.

Putin isn’t a threat to New Zealanders. Jacinda Ardern is.

Don’t fall for the distraction.
pic.twitter.com/wpeH5Brguy

‘Shame on you!’ was chanted by huge crowds as the protest was forcibly removed. The fires that broke out appeared to be most accidental, created by the destruction of tents and their cooking devices within.

“The police expected there would be hostility, resistance, and violence,” said Ardern. “While they had planned for it, it is another thing entirely to witness it.”

The freedom protest has been peaceful for four weeks until they were confronted by hundreds of police attempting to remove them by force.

The Freedom Protest gathered to rally against the country’s two years of increasingly harsh lockdowns and vaccine mandates that have severely restricted people’s rights and, in the case of those that do not wish to be vaccinated, taken away their ability to work. The protests mirror those held in Australia, Canada, the UK, America, and many European countries.

Despite pursuing a ‘Covid-Zero’ approach, the highly transmissible Omicron strain has broken through the Covid health orders and cases continue to climb through the majority fully-vaccinated population.

Where is the world outrage?

Protesters remain furious that they have been locked up, impoverished, isolated, trapped, and now facing perpetual unemployment and being locked out of society unless they submit to a vaccine they do not want.

As the protest reached its 23rd day – without the Prime Minister making any attempt to address the concerns of New Zealanders – police became concerned that troublemakers were embedding themselves among the majority of well-behaved protesters.

“In the last week we have seen a changing mix in the makeup of the crowd, in particular, we have become concerned that those with good intentions have become outnumbered by those with a willingness to use violence to affect their means,” said Andrew Coster, the Police Commissioner.

New Zealand has had many protests against Ardern’s Covid response since it began two years ago, but this particular protest ‘Convoy 2022 NZ’ began as a sympathy convoy for the Canadian truckers who famously occupied Ottawa demanding an end to the life-ruining vaccine mandates under Trudeau’s leadership.

The Voices for Freedom and ‘March Out These Mandates’ fed off the original protest. As the movement grew in size and the protest lagged on for weeks, the protesters camped in front of Parliament.

Ardern’s decision to remove the protest via force awkwardly came on the same day that pharmaceutical company and vaccine manufacturer Pfizer was forced to release unflattering documents related to vaccine trials after a freedom of information order.