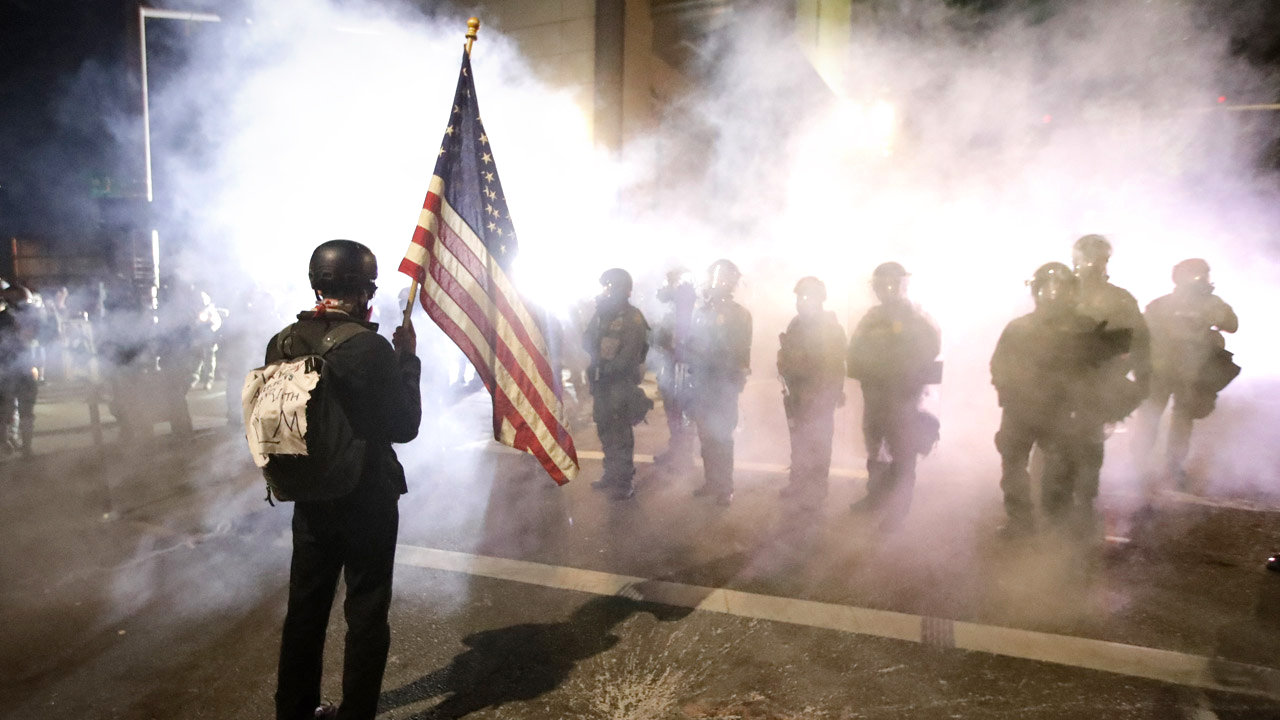 Portland’s mayor Ted Wheeler has come under intense scrutiny for his inability—if not outright refusal—to commit to ending the nightly Antifa riots that have been raging every night for the past 80-plus days.

Following the wake of a brutal beating of an innocent bystander, Wheeler has only now seen fit to condemn “all violence.”

Far-left anarchists involved in the brutal beating of a truck driver in Portland, which was captured on video, prompted the beleaguered mayor to condemn “all violence,” stopping short of naming and shaming the perpetrators.

“I denounce all violence, including the assaults that were filmed and posted to social media last night,” Wheeler said in a statement on Wednesday.

The city of Portland came under the national spotlight following weeks of violence at police precincts and the Mark O. Hatfield federal courthouse, prompting the Department of Homeland Security to dispatch the US Marshals and other federal agents to secure the facility.

Leftists involved in the violence then blamed the federal agents for “bringing the violence to Portland,” which they also claim is land stolen from indigenous people.

The Trump administration responded by decreasing the presence of federal law enforcement, following a pledge by the Oregon state governor to replace federal officers augmenting Portland police with state police.

The violence has only gotten worse despite decreased federal presence.

Instead of surrounding the courthouse, much of the action has now moved to the city’s residential neighborhoods.

On Sunday overnight, a man now identified as Adam Haner was chased down by members of Antifa and Black Lives Matter supporters. He was reportedly defending a homeless transgender person from being assaulted by muggers. When he tried to escape in his truck, protesters allegedly forced him to crash his vehicle. They then pulled him from his vehicle and severely beat him, footage of which went viral on social media after it was captured and shared by local independent journalists.

GRAPHIC: Rioters in downtown Portland detain man who had a car crash. They force him to sit on the ground while they search his belongings. One of them runs up and kicks him in the head, instantly knocking him out. There are no police. Video by @FromKalen pic.twitter.com/x646QheCV0

On Tuesday, Portland Police identified the suspect responsible for the brutal beating as 25-year-old Marquis Lee Love and are currently seeking to arrest him.

“Investigators have left messages for Love to turn himself in but will continue to look for him as there is probable cause for his arrest,” say the police.

US Attorney General to Portland, Billy J. Williams condemned the beating as an act of “depraved violence” and warned that the situation could get worse.

“Like many Oregonians, I was sickened by the video circulating online showing a man being pulled from his truck in Downtown Portland and beaten and kicked until he lies on the pavement unconscious. While the circumstances leading up to this brutal assault are still under state and federal review, I must condemn, in the strongest possible terms, this depraved violence,” he said.

“We must all continue to work together to achieve peace in the streets of Portland. If we are not successful, I fear one day soon we will wake up to news that a Portlander has been killed. We cannot let this happen.”