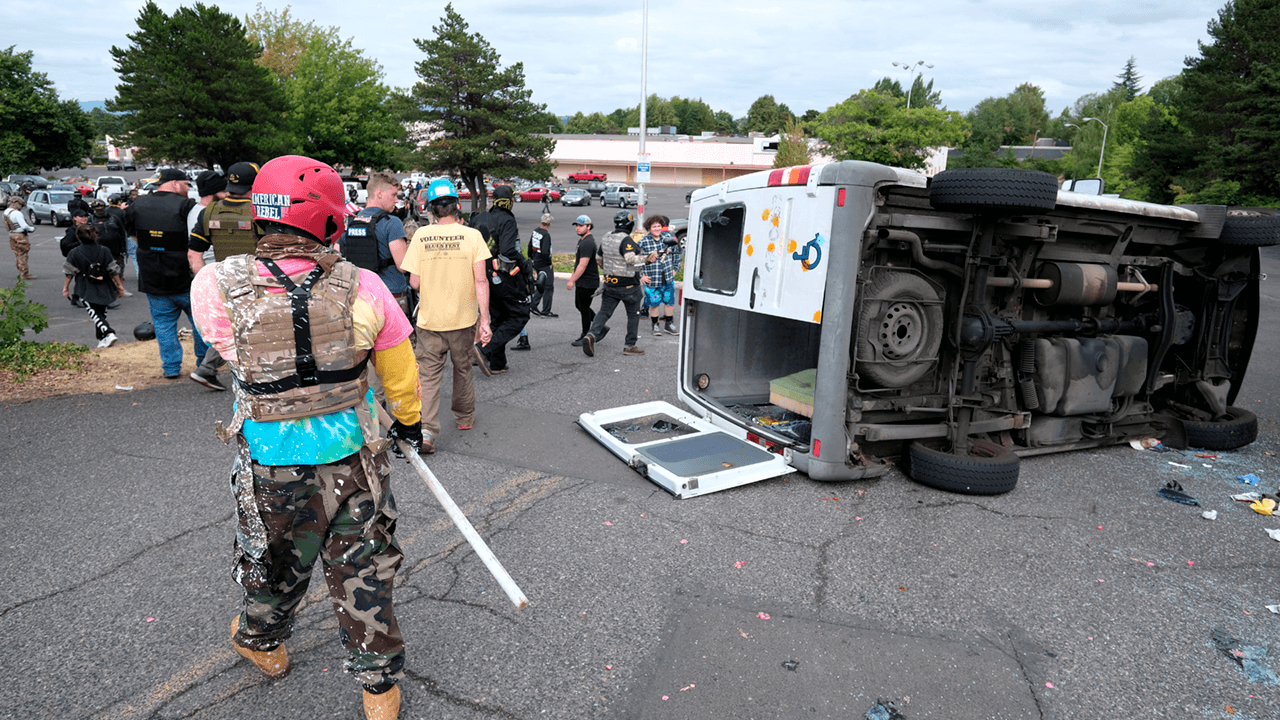 Antifa protesters clashed with the Proud Boys in Portland on Sunday after a right-wing rally called "Summer of Love: Patriots Spreading Love not Hate" took place in the parking lot of a former Kmart, with a nearby shooting that may be tied to the discord.

During the protests, a van attempted to drive in, but crashed, KOIN-TV reported. With left-wing “splinter groups” forming counter-protests, confronting the right-wing group, OregonLive reported that both sides were armed with "bats, paintball guns and wooden spears."

"People were lighting fireworks and dispersing chemical spray, as well as firing what appeared to be paintball and/or airsoft guns," police said in a statement. "Some property destruction was observed."

This was the scene just a few mins ago along NE 122nd/Skidmore. Group of about 50 counter protestors came to cause trouble at the right-wing “Summer of Love” rally where about 100 were gathered. Some fireworks, smoke bombs, paintballs being fired back and forth @fox12oregon pic.twitter.com/p4JFZPdte9

Fox 12 Oregon reported that a group of 50 counter-protesters set off smoke bombs and fireworks. Camila Orti, a reporter for the station, posted a video on social media of one of the clashes, showing smoke across lanes of traffic.

"Group of about 50 counter protestors came to cause trouble at the right-wing 'Summer of Love' rally where about 100 were gathered," she posted on Twitter.

During the protests, Antifa members were seen throwing smoke bombs and firing paintballs. One man was arrested in a shooting downtown, but it is not yet clear if the incident is related to the earlier clashes, police said.

Oregon Public Broadcasting reported that both sides engaged in debate before turning violent around 4:00 p.m. The report said, "Proud Boys and anti-fascists ran along 122nd Avenue, exchanging paintballs and bear mace. Some people in the crowd threw mortar fireworks near a Chevron gas station, which had to close."

Portland police called in all available police personnel in anticipation of the demonstrations turning violent. Portland Police Chief Chuck Lovell said Friday that despite expecting clashes, police will not necessarily be standing in between opposing groups.

Proud boys and anti-fascists (antifa) battled in the street of Portlands for 28minutes.

One gas station at the center of the clash closed down, employees indicated they worried about their safety.