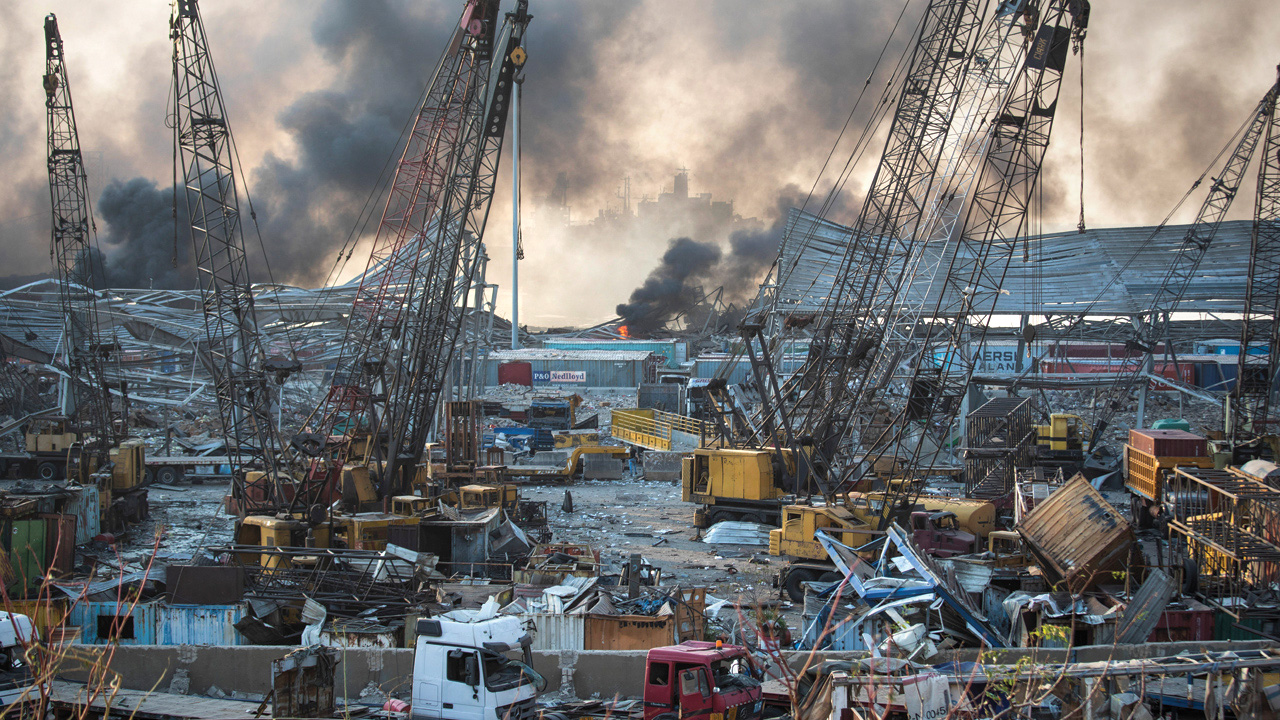 The Lebanese capital of Beirut was rocked by a massive explosion that took out the port on Tuesday afternoon. The blast, which could be felt 150 miles away in Cyprus, killed scores of people and destroyed surrounding neighbourhoods.

In what has been erroneously described by some as being akin to a “nuclear bomb,” the explosion levelled blocks of residential and office buildings surrounding the city’s port area. At least 135 people have been confirmed killed, and more than 4,000 are injured according to Lebanon’s Ministry of Health.

This is what it was like to be on the ground in Beirut when the explosion happened. It’s easily a couple of miles from the blast site. pic.twitter.com/hMhldr3Xpd

Numerous videos of the blast were shared widely over social media. Many had already begun filming the massive explosion before it occurred because a smaller, less destructive fire had already broken out at the port spewing plumes of smoke that could be seen miles away.

Lebanese President Michel Aoun claims that the explosion was caused by 2,750 tons of ammonium nitrate, the same explosive material used in the Oklahoma City bombing in 1995.

All port officials have been placed under house arrest pending an investigation into the cause of the explosion.

"No words can describe the horror that has hit Beirut last night, turning it into a disaster-stricken city,” said President Aoun.

Here's a video of the moments following the initial explosion in Beirut before the massive second blast. Appears to be either munitions or fireworks. pic.twitter.com/BPLRi4Nrvs

According to the BBC, Lebanese customs chief Badri Deher said that the government agency had repeatedly called for the material to be removed for years but “this did not happen, and we leave it to the experts to determine the reasons.”

Speaking at a press conference on Tuesday, US President Trump described the explosion as an “attack,” based on information provided by military advisors.

"Well it would seem like it based on the explosion,” he said responding to a reporter who asked him if he felt it was an attack. “I met with some of our great generals and they just seemed to feel that it was. This was not some kind of a manufacturing explosion type of event. This was, it seems to be, according to them, they would know better than I would — but they would seem to think it was an attack. A bomb of some kind.”

Trump’s description of the blast as a “bomb of some kind” contradicted earlier official claims from the Lebanese government that the explosion was simply the result of fireworks. The country would later admit that 2,750 tons of ammonium nitrate had been stored at the site.

Another look at the Beirut explosion right before it goes off. pic.twitter.com/DCTzooHoTP

In his speech, Trump said that the United States was prepared to offer assistance to Lebanon.

Lebanese security forces have sealed off a wide area around the blast site, and rescuers are now looking for bodies and survivors who may be trapped under rubble. Rescue boats have also been dispatched to patrol the waters off Beirut’s coast to look for those at sea who were possibly impacted by the explosion and the resulting shockwave.

BBC reports that rescue efforts have been hampered by power outages and that hospitals are currently struggling to cope with the number of injured, many of whom are in critical condition — including a “large number of children.” Saint George’s Hospital, which is located near the blast zone, was badly damaged and several employees were killed.

International efforts have been raised to help the people of Beirut. The European Union is sending more than 100 firefighters with vehicles, dogs and equipment to facilitate ongoing search and rescue operations. France and Russia have likewise sent planes carrying rescuers, equipment and doctors.

Israel, which has no direct diplomatic ties to Lebanon, has offered humanitarian aid. In a statement, Israeli Defense Forces spokesperson Brig. Gen Hidai Zilberman said that “now is the time to rise above any conflict.”