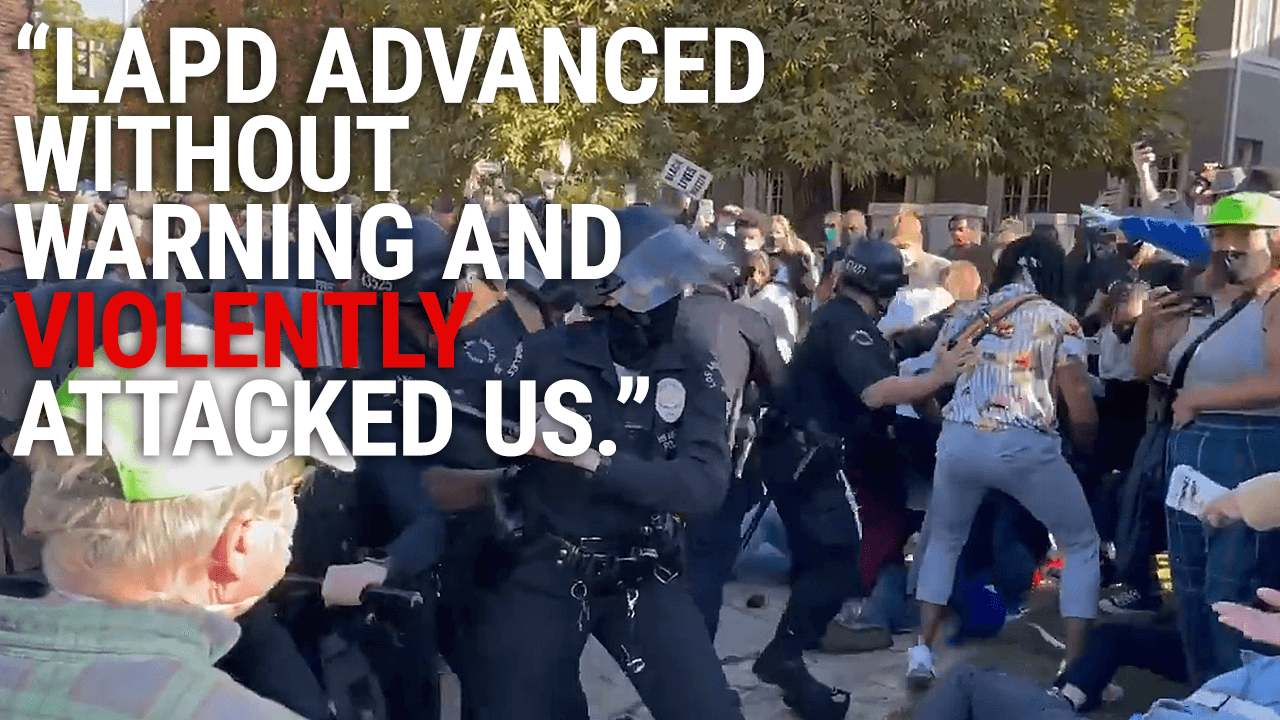 Footage of the confrontation, which was spread widely on social media, claimed to depict police brutality and the presence of children at the march, but did not appear to show any actual children. Activists described it as an “ambush.”

“For the past two weeks, we have been holding peaceful gatherings outside Mayor Garcetti’s mansion, urging [Joe Biden] to commit to keeping our failed mayor out of his administration. On Day 13, LAPD advanced without warning and violently attacked us,” claimed Black Lives Matter LA on Twitter. “LAPD officers in riot gear ambushed protestors, including small children, elders, people with disabilities, and other vulnerable populations.”

For the past two weeks, we have been holding peaceful gatherings outside Mayor Garcetti’s mansion, urging @JoeBiden to commit to keeping our failed mayor out of his administration. On Day 13, LAPD advanced without warning and violently attacked us. #BlockGarcetti pic.twitter.com/xWn3JFwgdY

TW: @LAPDHQ went at us with batons hitting mothers and babies and peaceful protesters in front of @MayorOfLA. LAPD pulled one of us randomly and ended up grabbing Jaime. pic.twitter.com/U9wX4XERiC

Los Angeles saw its 13th day of continuous protests at the mayor’s home since November 24, organized by Black Lives Matter and affiliated groups, in an effort to stop Joe Biden from appointing Garcetti to a cabinet position.

“We want to be very clear that as we happily usher out the Trump regime, we will not accept liberal white supremacy in the White House in the form of Joe Biden,” said Dr. Melina Abdullah, lead organizer of Black Lives Matter LA. “It doesn’t matter to me if Kamala Harris is your vice president if you’re using her black woman body to usher in oppressive systems and oppressive people like Eric Garcetti.”

In videos posted on social media, a police officer can be seen making contact with a protester with his baton after protesters attempted to “de-arrest” an aggressive activist.

“After multiple warnings, four officers attempted to make an arrest for the above violation when the crowd moved in on the officers, punching, pushing and kicking,” the LAPD said in a statement. “Officers used their baton to prevent the crowd from forcefully attempting to remove the suspect from police custody. However, the suspect ultimately got away.”

Police say that one officer sustained a possible concussion as a result of the clash, which was declared an unlawful assembly by the LAPD.

“The LAPD said officers converged on the assembly because a protester with a bullhorn had violated an L.A. municipal code against producing sounds that carried more than 200 feet,” the LA Times reported.

According to the paper, Jamie Penn, a transgender activist who serves on a local neighborhood council, was among those arrested. Penn was charged with “lynching,” which the Times calls “an outdated term for trying to remove someone from police custody that was officially dropped from the law.”

Penn has since been released and called for protests to resume.

I have one request.

Black Lives Matter activists posted the phone numbers of three elected Democrats on social media to call upon them to slam the LAPD’s response to their protest, including Rep. Jimmy Gomez and state assemblyman Miguel Santiago, both of whom complied with their demands and said they stood with Penn.

LAPD’s brutal actions this morning are unacceptable and must be denounced by everyone. I stand w/ you in denouncing police brutality demanding the immediate release of Jamie! #FREEJAMIE https://t.co/JUOXRkrdfc

In regards to @lapd response at Getty House today:

Peaceful protestors deserve the space and protections to make their voices heard. Anything short of that is NOT acceptable.

No exceptions. No excuses.

The Daily Wire reports that Nithya Raman, a member of the Democratic Socialists of America who was elected to the Los Angeles City Council in November, also joined in condemnation of the LAPD.

Today, protesters outside the Mayor’s residence were struck with batons. An elected member of the Wilshire Center-Ktown NC was arrested.

There is no acceptable justification for LAPD to use force against Angelenos who are peacefully exercising their right to free speech. https://t.co/5ZOjwih8QD