Former Reddit CEO Ellen Pao admitted on Twitter that she attended a party with Jeffrey Epstein’s partner Ghislaine Maxwell, and that everyone at the party “knew” that Maxwell had allegedly trafficked underage girls.

In a tweet posted on Sunday night, Pao, who goes by @ekp on Twitter, responded to a tweet by angel investor and entrepreneur Cyan Banister who lamented that she “used to be kinda sad that I wasn’t ever ‘cool’ enough to get invited to some parties that people I know were invited to, but now, I’m super thankful that I’ve never accidentally had a photo of me taken with Ghislaine [Maxwell]”

Ghislaine Maxwell has been seen in photographs standing next numerous billionaires and tech industry luminaries, including Elon Musk, who continues to be trolled on Twitter over the photo.

In her reply, Pao wrote that Maxwell attended the “Kleiner holiday party in 2011.” Pao used to work for Kleiner Perkins Caulfield & Byers and lost a sexual discrimination lawsuit against the venture capital firm in 2015 after she was fired from the firm.

“She was at a Kleiner holiday party in 2011, but I had no desire to meet her much less have a photo taken with her,” wrote Pao. “We knew about her supplying underage girls for sex, but I guess that was fine with the ‘cool’ people who managed the tightly controlled guest list.” 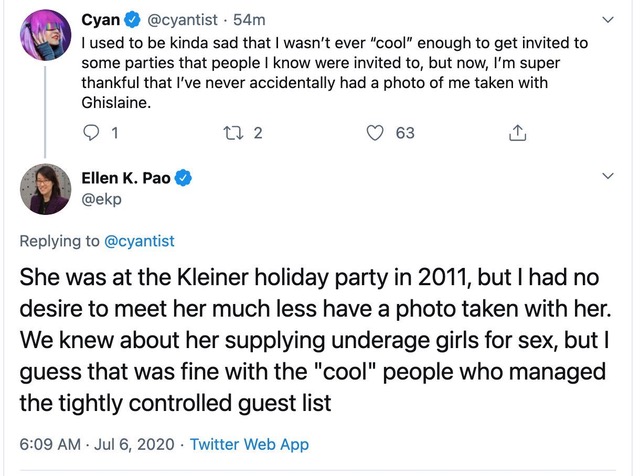 As a Business Insider article from 2011 details, numerous high-profile people attended the party, including former US Vice President Al Gore, and tech executives Bill Joy and Jared Morganstern. “Even spouses weren’t allowed in. The spots were reserved for investors and their portfolio founders,” the piece details.

In a now-hidden response to a critic who condemned her for attending the event, Pao wrote that she was not fine with Maxwell’s attendance but didn’t speak up.

“I was a junior partner on the outside of the inner circle, and what I said made no difference her and in many other decisions,” she wrote.

She later walked back her claim that that those who attended the event knew Maxwell’s proclivities for certain and clarified that they had merely “suspected” the Epstein associate of sexually trafficking underage girls.