Eleven people were arrested after being involved in what the RCMP called a criminal organization. 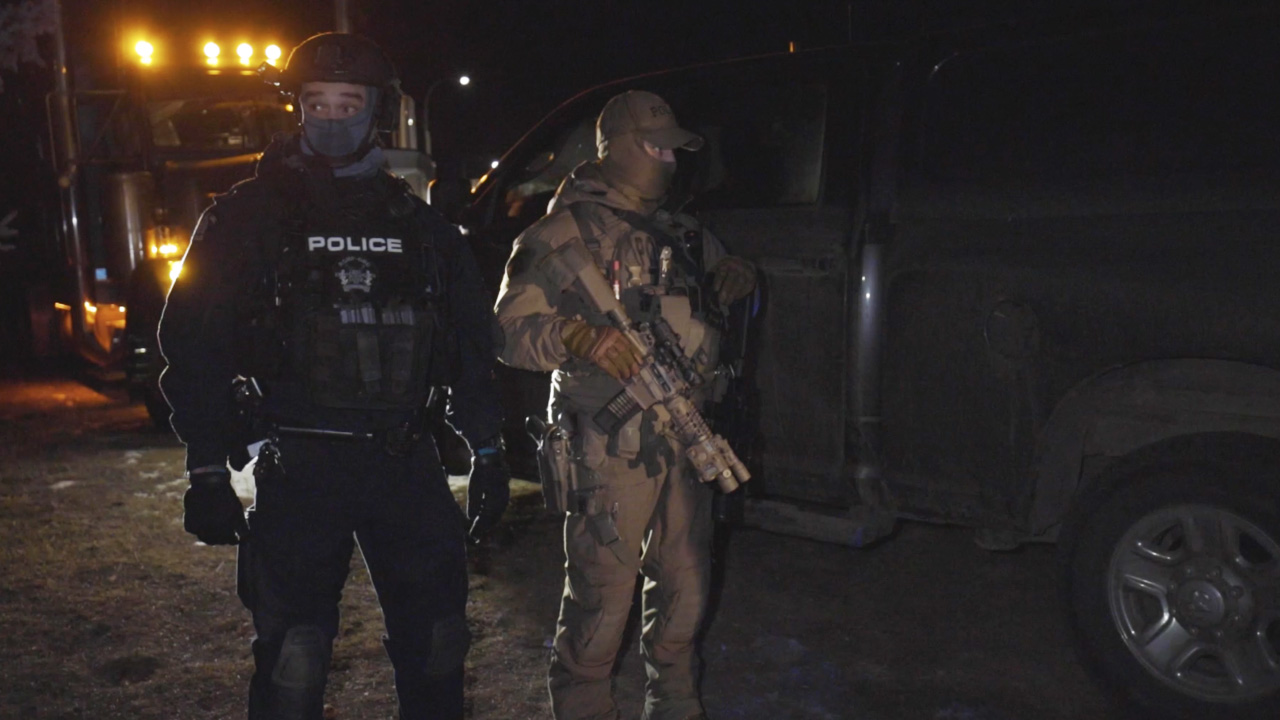 Sunday night, RCMP say they obtained a search warrant for a house in Coutts, Alberta, the border village where truckers and farmers have been blocking border access for two weeks in protest of COVID-19 restrictions.

Eleven people were arrested after being involved in what the RCMP called a criminal organization; 13 “long guns” along with handguns, body armour, a machete and ammo were seized from the raided home and trailers.

Rebel News reporter Sydney Fizzard has been embedded in the blockade since January 30. Syd was on the scene in Coutts on Sunday night as police presence ramped up.

On Monday morning, the RCMP issued a press release stating:

An example of the militant mindset of a small segment of the protest, earlier in the evening, at approximately 8:00 p.m., a large farm tractor and a semi truck, both involved in the blockade, attempted to ram a police vehicle. The police officer was able to reposition and avoid the collision. RCMP officers followed the suspects to a location where the protesters were gathered. The driver of the tractor was identified and we are actively working to locate him so he can be taken into custody. The Alberta RCMP have seized the farm tractor and semi truck involved in this incident.

Last week, Alberta Premier Jason Kenney stated in a press conference that RCMP reported an assault against an officer. Rebel News reporter Kian Simone received a statement from the RCMP confirming no such assault happened. The assault was, in fact, a common motor vehicle fender bender.

Here is the statement from the RCMP regarding the alleged assault yesterday.

It was between two civilians who were in a vehicle collision.

The truckers have remained peaceful.

The timing of the raid, the same day Prime Minister Justin Trudeau invoked the Emergencies Act, coupled with revelations that the RCMP vandalized three pieces of heavy equipment near the border protest, raises many questions.

It is important to note that no names or charges were released by police, nor has any evidence linking those arrested to the border protest.

The Emergencies Act, described as a “ temporary” measure to be used for an “urgent and critical situation” that "seriously endangers the lives, health or safety of Canadians” also needs a threat to justify it.

Rebel News is deploying more reporters to the border blockade to investigate. where many questions remain unanswered.

In the meantime, we count on your support from our generous viewers to make it out to places like Coutts and Ottawa. If you want to help fund our efforts to bring you the truth, you can donate at ConvoyReports.com.

Now that Justin Trudeau has more power than ever, these truckers will need all the legal help they can get.

If you want to help the truckers in their legal defence, visit TruckerLawyer.ca. Rebel News has retained Chad Williamson from Williamson Law to take on this massive battle to help give the protesters fair shake at the negotiating table.