Some members stayed inside the store against police orders, and the officer detained and arrested the man seen in the viral video. 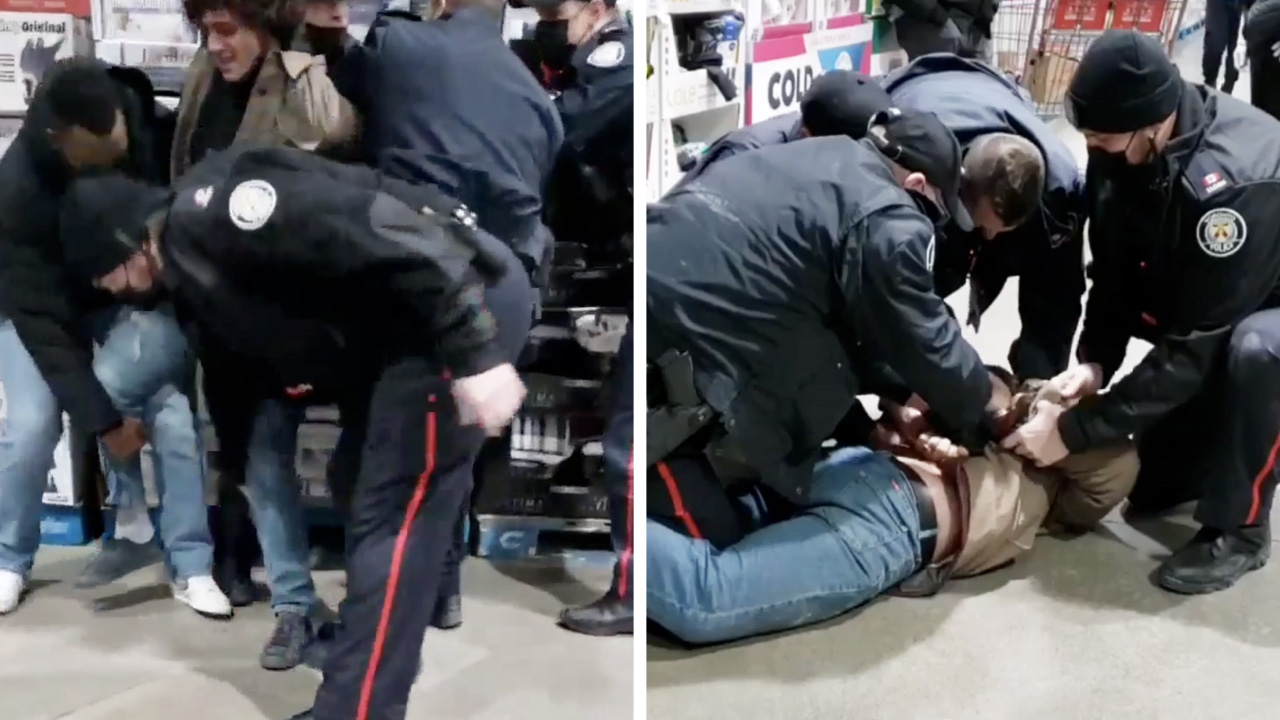 This past weekend saw Toronto locations of Costco, Canadian Tire and The Beer Store all refuse service to those unmasked due to a medical exemption, calling police to make an arrest and blockade several store entrances to prevent customer entry.

A group of peaceful activists against discrimination and medical segregation, called Revolutionary Canadians, organize pop-up protests in defiance across the GTA. The founder says he created the page to find “Canadians willing to take a stand against tyranny.”

Customer in an Etobicoke Costco is arrested and hauled away by cops for not wearing a mask despite having a medical exemption.

Allegedly one of the managers of the store is detaining the man alongside police.

It's for your health. pic.twitter.com/dvI3jo2oeU

On Sunday January 14 they entered a Costco store in Etobicoke, Ontario to shop maskless and encourage Canadians to embrace normality. They were immediately met with the store managers who provided them face shields and masks to wear to gain entry into the store. The group, once inside, removed them and continued shopping as normal. The group met security, staff and managers who followed them around the store asking them to leave for not wearing a mask, despite medical exemptions claimed by all.

As previously reported by Rebel News’ Tamara Ugolini, Costco has a no-tolerance policy for those who cannot wear a mask. The accommodation offered officially is to be served online for pick-up only.

In the 34-minute video posted on their Instagram page, you can see Toronto police were called and arrived on scene within 20 minutes. An officer with a Thin Blue Line badge first confronts the shoppers letting them know Costco’s mask policy. A lady from the group rebuts and says “shouldn’t you be protecting the Charter of Rights as a police officer?” to which the officer replied, “Well I am upholding the law, and what the law says right now is that you have to wear a mask.”

A Costco manager is seen directing the officer to escort the group out and formally trespass them from the property. As they walk away, dozens of masked Costco customers can be seen in the video within 6 feet of the group and within each other.

Some members stayed inside the store against police orders, and the officer detained and arrested the man seen in the viral video. Members of the group say one of the non-uniformed men helping with the arrest is a store manager. Rebel News could not confirm this allegation. He is seen holding down, and pinning the maskless man in the 2-minute long video. Throughout the video the man being arrested claims his medical exemption, alongside some off camera.

Rebel News has reached out to Costco and the Toronto Police for further comment and clarification. They are yet to offer any comment.

If you’re against unjust vaccine mandates and want to stand up against them, head to FightVaccinePassports.com where Rebel News is working alongside a registered charity to raise funds to hire top-notch lawyers to fight these mandates across the country.