Hundreds of police at temporary Ottawa HQ, multiple arrests of Rolling Thunder protesters Friday night in and around 'Exclusion Zone'

Reports are that as many as 800 RCMP officers have been authorized to work within Ottawa to assist local officers. 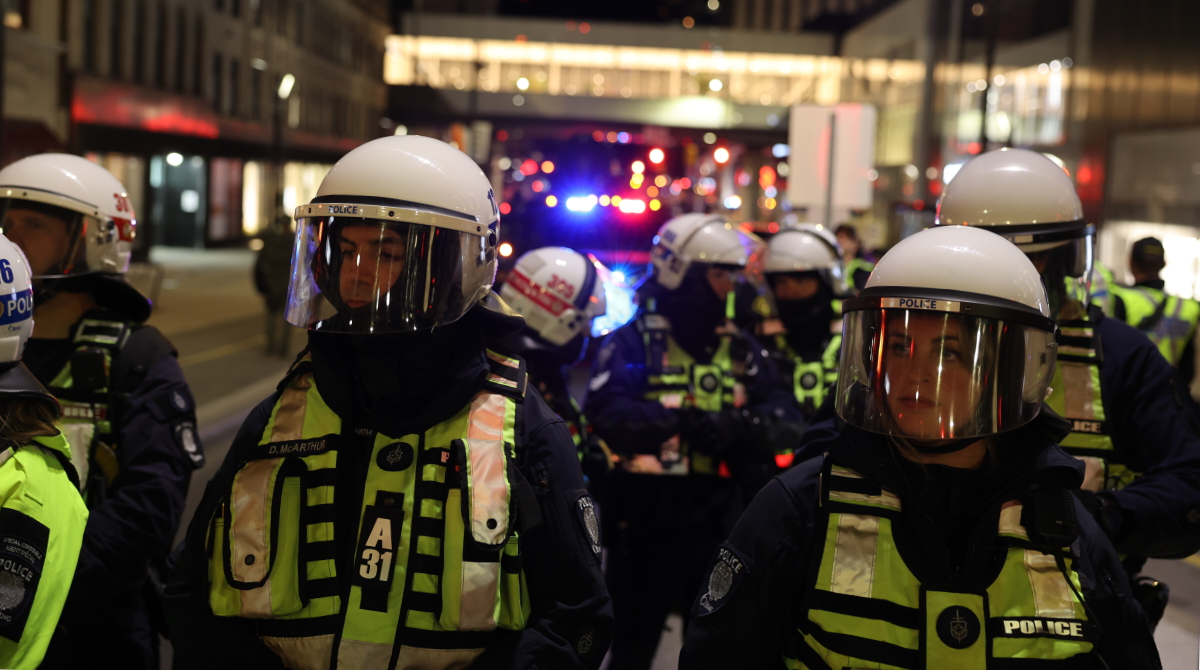 The growing police presence in Ottawa is in response to the Rolling Thunder bikers' convoy that began arriving in the city Friday night.

The bikers, many of whom are veterans of the Canadian military, came to “reclaim” the National War Memorial and to protest remaining COVID measures and the use of the Emergencies Act against the peaceful truckers' Freedom Convoy to Ottawa in February.

Ottawa interim police chief, Steve Bell, who oversaw the implementation of the Emergencies Act in the city in February, which resulted in weeks of incarceration for organizers of the previous convoy on minor charges, asset and bank account seizures and police brutality against protesters and journalists including Rebel News' Alexas Lavoie, created a so-called “exclusion zone” in the downtown core, allowing only “lawful traffic” to enter.

Ottawa's interim police chief: "We have created an exclusion zone in the downtown area" and that this weekend there will be a "large and sustained police presence."

Rebel News journalists, David Menzies and Isabelle Rivoche, are part of a three-unit team of Rebel journalists in the nation's capital this weekend to document the treatment of peaceful demonstrators at the hands of police and to show the side of the protest the mainstream refuses to.

Reports are that as many as 800 RCMP officers have been authorized to work within Ottawa to assist local officers.

David and Isabelle were able to locate the temporary police headquarters at the EY Centre, 20 minutes outside of Ottawa:

Spotted at the EY Centre about 20 minutes outside of downtown Ottawa. We have seen Toronto, York and Durham Police officers here. There is a conference room inside this building that is filled with hundreds of Police officers. https://t.co/8hpC710hZK pic.twitter.com/b1OQYzOGFk

On Friday afternoon, police teams could be seen gearing up:

Police are gearing up, it’s unknown what their plans are for the large crowd that has gathered just past Parliament Hill. https://t.co/ys9Wa4SGV5 for more. pic.twitter.com/99uVXRMBji

At one point, roughly one hundred officers formed a line in front of peaceful protesters on the street:

Nearly one hundred police are lined up in front of hundreds of peaceful protesters. It’s unclear what they plan to do at the moment. https://t.co/ys9Wa4SGV5 pic.twitter.com/1vEuF7UMul

David's livestream from the streets of Ottawa Friday night shows arrests of peaceful protesters, pulled out of the crowd seemingly at random:

At Parliament Hill, the “pre-crimes” unit of various law enforcement services are trying to shutdown peaceful protesters - and charge others with crimes they “might” commit. Minority Report has come to fruition in Justin Trudeau’s Canada https://t.co/fnCt8EiHac

To support the work of Rebel News journalists from within the Rolling Thunder bikers convoy protest in Ottawa, please visit www.ConvoyReports.com.