The billboard Hamm was involved with was to serve as a symbol of solidarity with the Harry Potter author who is also an advocate for sex-based rights. 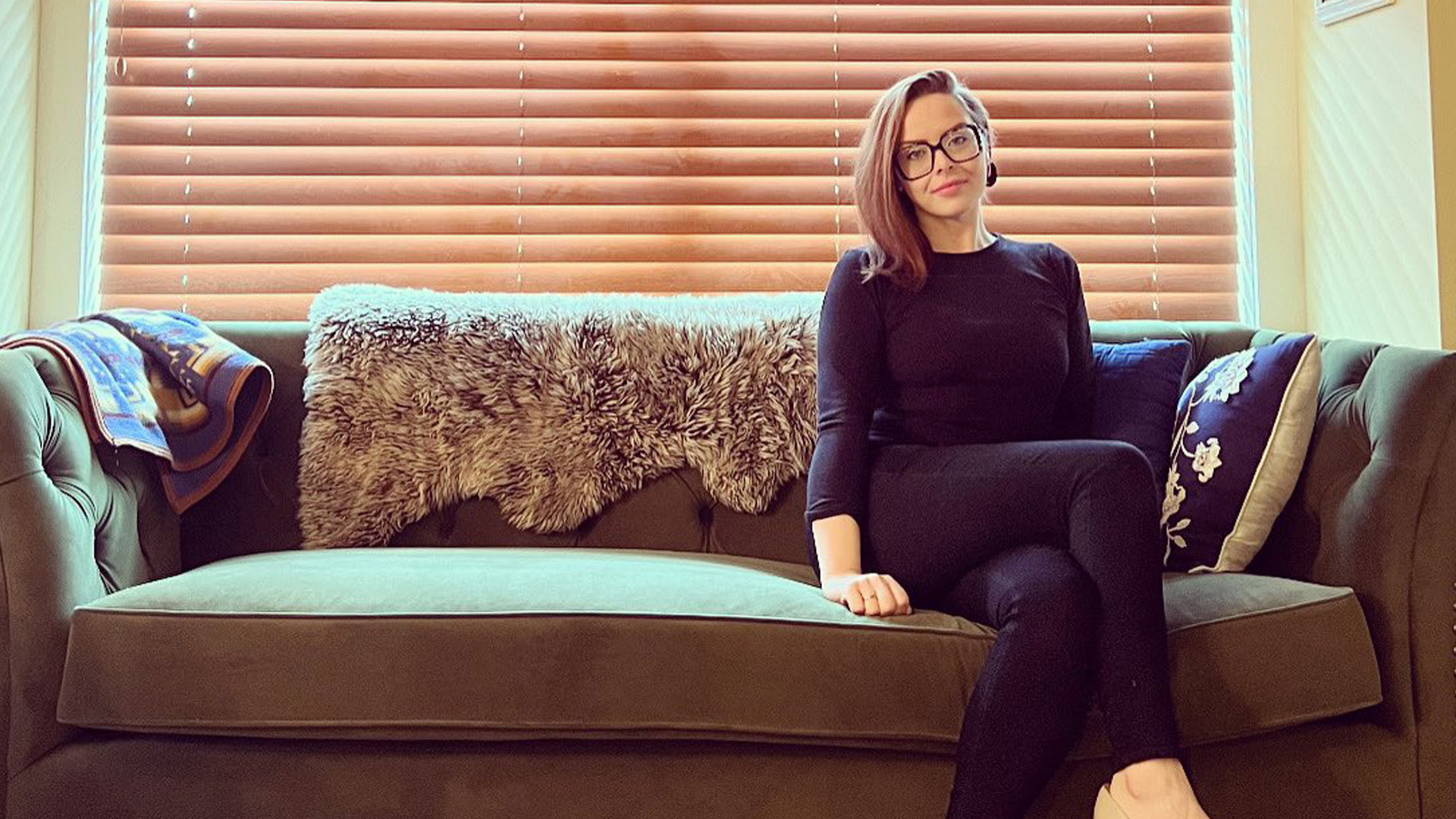 By now, you’ve likely heard about how Canadian clinical psychologist and brilliant commentator Jordan Peterson is having his freedom of thought and expression threatened by his regulatory body, the College of Psychologists of Ontario (CPO). You can learn more about his plight and take action at SavePeterson.com.

But Peterson isn’t the only one.

New Westminster nurse and mother of two Amy Hamm is also in a free speech battle against her regulatory body, the British Columbia College of Nurses & Midwives (BCCNM). Like Peterson, the alleged thought crimes against Hamm have nothing to do with how she has treated patients, and everything to do with expressing opinions on social media that do not neatly align with the  'affirm all things trans or else,' narrative.

If you're in healthcare & you disagree w/me & think teens should have double mastectomies and males should be in female rape shelters, you still need me to win. There are ever-shifting goalposts when woke ppl decide who to cancel. They'll come for you, eventually.

The precursor to the BCCNM launching an investigation against Hamm was complaints made against her for her involvement in the placement of a huge 'I heart JK Rowling' billboard in Vancouver. The billboard was to serve as a symbol of solidarity with the Harry Potter author who is also an advocate for sex-based rights.

Vancouver billboard taken down after ONE complaint by #trans activists@DreaHumphrey reports from the scene:

The first portion of Hamm’s disciplinary hearing took place in September of last year. This Tuesday however, was the start of the third portion of the hearing and is expected to run for five days total.

While the battle to be free to keep her license and also advocate for women's rights such as safe spaces has been taxing for Hamm, she’s optimistic about her pending fate. In a statement to Rebel News, Hamm said, “I still have faith that due process will work and we will win. This is not just about me — it’s about our fundamental freedoms as Canadians, and the right of all healthcare workers to engage in free expression.”

Sitting in on day 1 of the BC College of Nurses & Midwives hearing re: Amy Hamm for an upcoming report. Hamm has been accused of making “discriminatory and derogatory statements” against transgender people online while identifying herself as a nurse. https://t.co/X8HOM6efSG

“When people are not able to express their opinion in the public square on matters that have nothing to do with their patients, and then still have to face disciplinary action it’s really, you know, it’s just something disturbing that we need to nip in the bud,” Libertas Law lawyer Lisa Bildy told Rebel News in a previous interview about Hamm’s plight.

Bildy has been representing Hamm in her disciplinary process through the Justice Centre for Constitutional Freedoms (JCCF) at no cost to Hamm. During that same interview, Bildy reported seeing “increasing examples of regulatory bodies for health professionals and others being used as sort of a tool for cancel culture.”

Bildy’s statement couldn’t ring more true when it comes to the level of medical silencing we’ve seen occur to medical professionals who dared to go public with any professional opinion that contradicted the politically approved mainstream narrative on COVID-19, its treatments, and relative restrictions.

One of the first doctors in Canada to raise concerns about COVID measures such as lockdowns that eventually correlated with mass closures of businesses, a sudden spike in overdoses, deaths from delayed surgeries, and child suicide attempts was pediatrician Dr. Kulvinder Kaur Gill.

💔 “There was an alarming 20% rise in babies being killed or harmed during the first lockdown—toxic mix of isolation, poverty and mental illness“

Every politician, media and academic that continues to push deadly lockdowns/restrictions:
HOW do you sleep?https://t.co/yytTEbIhCs

Instead of allowing the professional to be entitled to her own medical opinions on Twitter, after receiving complaints about the doctor's online activity, the College of Physicians and Surgeons Ontario (CPSO) cautioned Dr. Kaur Gill multiple times.

Dr. Kaur Gill currently has pending hearings related to the allegations made against her that she “engaged in disgraceful, dishonourable or unprofessional conduct” and made “misleading, false, or inflammatory statements about vaccinations, treatments and public health measures for COVID-19.”

Bildy also represented Kaur Gill in her appeal to have the cautions against her overturned thanks to The Democracy Fund charity. You can make a tax-deductible donation here, to help cover the costs of important legal battles like Kaur Gill’s.

Of course, the cancel culture mobsters on Twitter who feed off of silencing those who they disagree with didn’t stop with just filing a complaint with Dr. Kaur Gill’s licensing body. The pediatrician also received a steady stream of what she referred to as “defamatory statements” about her, for which she, in partnership with another Brampton, Ontario doctor named Dr. Ashvinder Kaur Lamba, hired lawyer Rocco Galati to represent them for alleged defamation.

However, in February, the courts disagreed with the two doctors, tossed the defamation suit, and ordered them (mostly Kaur Gill) to have to pay 1.1 million dollars in costs. Both Dr. Kaur Gill and Dr. Kaur Lamba have obtained new counsel and are appealing the court's decision.

Rebel News contacted Lisa Bildy with Libertas Law, who has been contracted by The Democracy Fund to represent Gill for various proceedings about complaints and investigations involving the College of Physicians and Surgeons of Ontario.

BC’s regulatory licensing bodies have been just as eager to shut down state-competing medical opinions from nurses and physicians on all things COVID-19. An example of such is what Dr. Stephen Malthouse, one of the province's first family doctors to be threatened by his college for allegedly spreading “harmful COVID-19 misinformation,” has endured.

.@DreaHumphrey takes a look at a letter sent by BC healthcare workers to government officials outlining their concerns surrounding COVID-19 and hears Dr. Stephen Malthouse's opinion on the letter and similar issues he has with the government.

Following his open letter to British Columbia’s Public Health Officer Dr. Bonnie Henry, in which Malthouse raised concerns about COVID-19 measures and advice the province was giving, Malthouse found himself repeatedly warned by the College of Physicians and Surgeon’s BC (CPSBC).

Malthouse also retained lawyer Rocco Galati to represent him and tells Rebel News that after being summoned to appear before the college, a meeting between the CPSBC and himself was abruptly cut short after the college refused to record the meeting.

Despite having numerous complaints made against him alleging that his public medical opinions were “COVID miss-information,” Malthouse says his college has never defined the term, nor have any of the complaints described which part of what he said they allege to be misinformation.

In March 2022, Dr. Malthouse’s license was suspended for “allegedly trying to circumvent public health policies by writing mask and COVID vaccine exemptions.” Malthouse says he currently remains a registrant, previously called a "member” of the CPSBC, and despite not being able to practice, he plans to renew his license this year.

Like these brave medical professionals, Rebel News also faces great censorship for bringing you reports just like this one.

If you appreciate the work that we do, please donate what you can at StopTheCensorship.ca to help us fight Prime Minister Trudeau’s plans to kill Rebel News through a new online censorship law.