While tension ramped up for protesters at major border crossings nationwide, a peaceful convoy and rally visited the quiet, rural Regway crossing in the prairies. 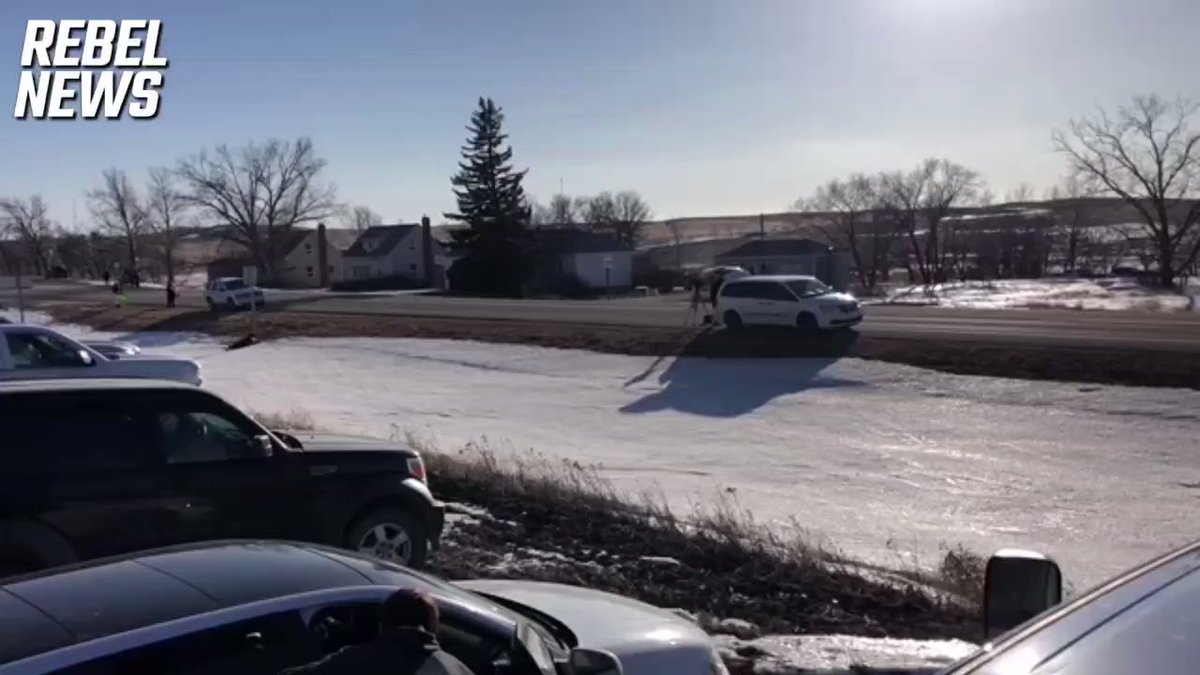 Speculation has occurred as to whether the ongoing nationwide trucker convoy protests that began in Ottawa played a part in Premier Scott Moe’s decision to lift restrictions, but either way, the announcement was certainly welcomed by supporters of the convoy.

Despite the removal of restrictions in Saskatchewan, some convoy supporters have continued to protest in various parts of the province this past week, standing in solidarity with those nationwide who have not yet had restrictions lifted, nor the very policy that the Freedom Convoy was based on fighting: vaccine mandates for cross-border truckers.

There is also a concern over future inter-provincial vaccine mandates, as mentioned by Minister of Transport Omar Alghabra in response to the convoy.

Yesterday, some Saskatchewan convoy supporters headed south to the Regway Canada-U.S. crossing to express those concerns, joining what has become a multi-crossing protest along the more than 8,000km long border.

In an interview with CBC News, one convoy organizer and trucker, Lane Burgess, said he didn’t anticipate that the show of support would blockade the border or impede traffic.

Trucks left Regina at 11 a.m. and headed out to arrive at the Regway CBSA border at 2 pm.

Despite Regway being an extremely isolated, rural border crossing (it is located at Minton, Sask., a geographically isolated hamlet of less than 60 people), a notable crowd and convoy found their way to the windy prairie location.

1 of 2: Today, the very remote Regway U.S./Canada border crossing in SK attracted an energetic convoy which started in Regina.

The protest was peaceful, with the road only being blocked for 25-30 minutes. There was heavy police presence.

2 of 2:...quiet, unassuming border crossing near a hamlet of less than 60 people & far from major centres.

Rebel will continue to give you the other side of the story. To follow & support our nationwide coverage of the convoy, visit:https://t.co/yqQqjOaECH pic.twitter.com/8rl1KXZsgQ

Canadian flags were a common sight, along with signs against mandates and calling for freedom.

The police presence was heavy; one participant I spoke with reported 28 RCMP vehicles.

However, the protest was peaceful with no incidents, and as Moe requested, did not impede the border, with lanes only being blocked for approximately 25–30 minutes.

Meanwhile, a counter-protest was occurring at the same time in Saskatoon, with participants calling for Saskatchewan to reconsider lifting the restrictions.

Organizers for this event state that it is too early to remove the vaccine and mask mandates, and are also calling for PCR tests and COVID-19 data to be made available to the public again.

They believe Moe is making health decisions based on politics vs. science, with one organizer, Joel Hill, saying that Scott Moe is “pandering to the fringe minority.”

All of these sentiments are summarized in a chant made by Hill and other organizers/participants:

These are the chants that @joelghill and his wife and me and my husband wrote for the protest! Please retweet! #covid19sk @actagainstcovid pic.twitter.com/IFgcMErfXS

The pro-mandate protest was also peaceful with no incidents reported.

The rally gathered larger crowds than a similar protest held at the Saskatchewan Legislative Building in Regina on Jan. 29, though pro-convoy rallies and events have consistently brought out larger crowds.

There have also been events and convoys through smaller Saskatchewan centres, especially this past week as seen in Yorkton and Swift Current, with smatterings of protests and acts of solidarity from across the province, found all over social media.

The debate may continue among citizens as to whether Scott Moe is doing the right thing, the wrong thing, or some shade of grey in the middle.

However, given that most municipalities, school divisions, the SHA, post-secondary institutions and other organizations are following Moe’s lead, it seems that the province will continue to head in the direction that many other Canadian provinces such as Alberta are doing, as led by most Nordic countries: ditching restrictions and mandates, and finding a way to live with COVID-19.

While Canadians and the world watch for Prime Minister Justin Trudeau’s response to the convoy, it is important to remember that provincial and municipal policies carry as much (or at times more) weight in citizens' day-to-day lives.

These policies are changing rapidly, which could make for some interesting protests and rallies in the coming days as the harsh winter weather slowly shifts to the warmth of spring.

Rebel News reporters are covering the other side of the story at protests across Canada.

Unlike the legacy media, Rebel doesn’t accept taxpayer funding. We rely on generous donations from people like yourself If you’d like to support our journalism, please consider a financial donation, and sharing our content!. Thank you to all those who have supported us thus far.