Toronto “Tent City” thugs finally leave. Now they should pay to clean it up 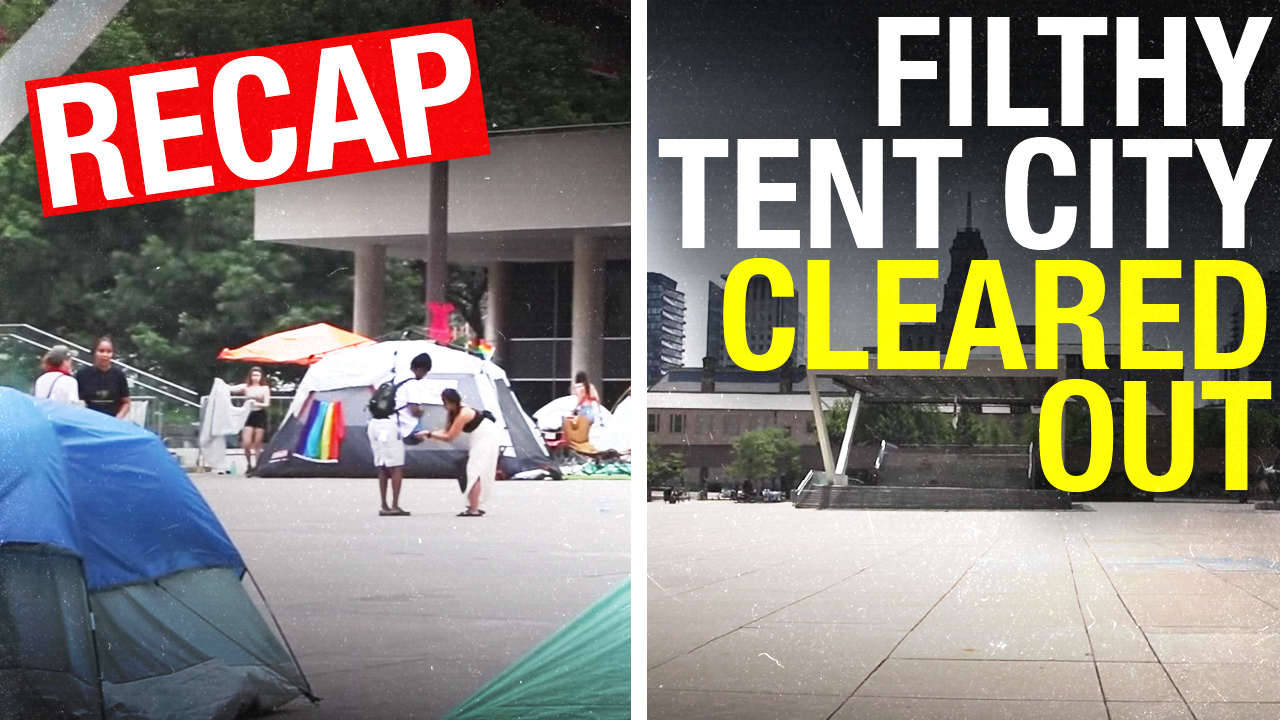 What a delightful day in humid Hogtown. For there we were, en route to Nathan Phillips Square, home to Toronto City Hall, in order to file our latest update on the illegal occupation. For three, long weeks, an assortment of Antifa and Black Lives Matter types have occupied the square, along with a ragtag hodgepodge of allies including the homeless, drug addicts, and the mentally ill. They were disgusting and violent.

Dubbing themselves “Afro Indigenous Rising”, they established a Seattle-style “autonomous zone” and a “sacred circle” which made the encampment untouchable – well, to the likes of Toronto’s testicular-challenged mayor, John Tory, at least.

And despite being issued with a trespass notice (11 separate violations under the Trespass Act) a week ago, the campers remained. Rebel News reporters, however, were threatened with trespassing charges by barely literate City Hall Security guards for practicing journalism in the public square. But we remained, too.

But on Friday, the members of AIR departed. The question arises: why? And the answer is: there really wasn’t much of a camp to begin with.

As Rebel News exposed a few days ago, most of the tents were empty shells – indeed, this tent city was really just a scam, although you would never see that reported by the mainstream media.

Especially galling was the fact that the ringleaders weren’t even camping in tents but rather staying in relative luxury across the street at the Sheraton Hotel, where rooms start at $277/night!

But wait a second – how could a bunch of unemployed and unemployable squatters afford that kind of hospitality?

Well, it turns out that these con artists had raised more than $49,000 via a GoFundMe page! Golly, I wonder how the donors feel about the fact that their money wasn’t going to fight racism but rather it was being used to fund swank hotel stays (complete, I’m sure, with room service and spa treatments.)

As well, the AIR membership had been further dwindling in recent days allegedly due to ideological differences. For example, the communist bloc moved out awhile ago after some in the Afro Indigenous Rising members began selling stuff in some makeshift giftshop run out of a tent. Can’t have evil capitalism, after all.

So, at the end of the day, the few who were still carrying out this farce likely surrendered due to utter boredom. And besides, I’m pretty sure they’ve most likely squandered that $49+K they had raised. Besides, you don’t expect these champagne socialists to reside in filthy tents when the humidex is pushing 40 C, do you?