If we're all 'global citizens' who gets to rule? Klaus Schwab has a plan 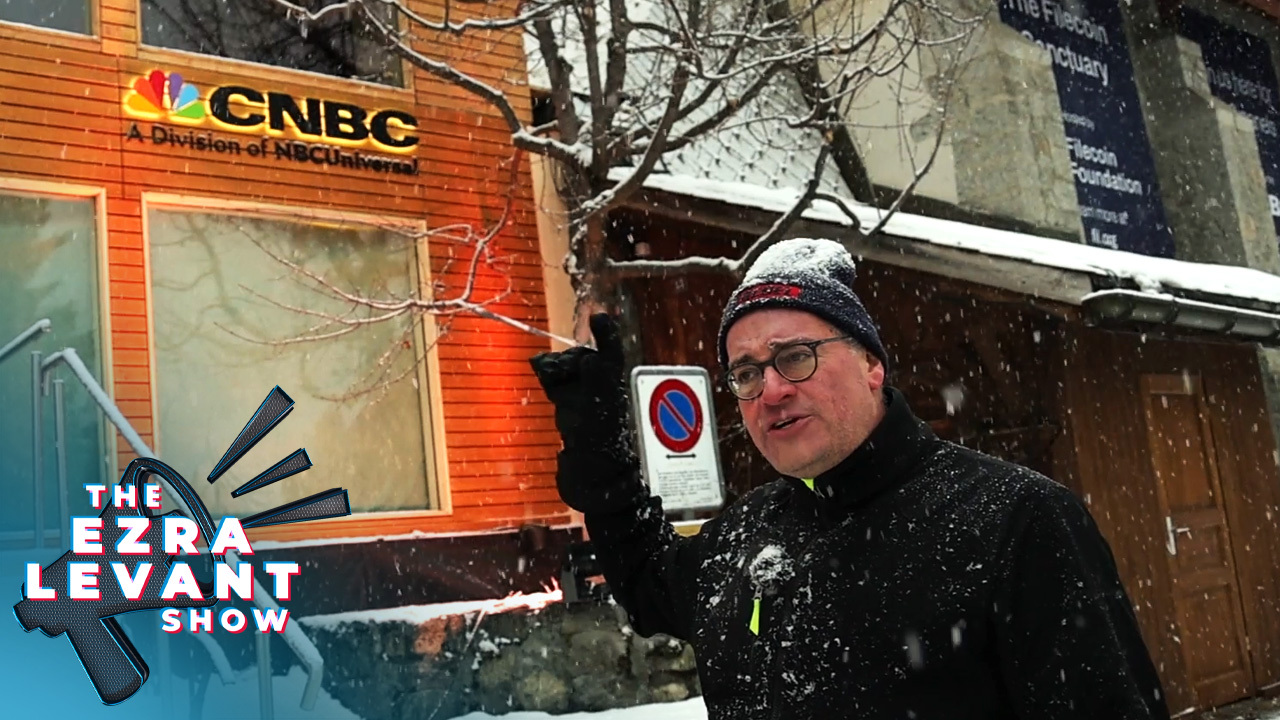 I'm broadcasting tonight's episode of the Ezra Levant Show from the chilly Swiss Alps, not because I'm on a skiing vacation, but because it's where the powerful elite have gathered for their annual secretive retreat at the World Economic Forum.

I'm here with an ace team to expose what really goes on in Davos, where the world's powerbrokers come together to set the agenda for humanity's own good, whether we like it or not.

At this time of year, they make it as hard to get to for outsiders as possible in this place. The entire town's hotels are booked up by the World Economic Forum.

So Rebel News is renting an Airbnb that is almost an hour away from the event. You just simply can't get into the city and although we've been walking down the downtown strip today, that will not be allowed tomorrow, as you'll need to have a World Economic Forum access digital ID card to get through.

And, of course, they're not handing those out to just anybody. You can buy your way in and depending on the access, you need $400,000 or more.

And all along the main strip, you can see people happily paying that or much more to showcase their company, their country, their scheme, their investment scam to the high and mighty, the billionaires and the oligarchs who gather here.

It's not like this for the rest of the year, it's all just for the week of Davos. They take it over like a movie set, they put up a facade of all the different companies who purport to be working for the World Economic Forum's mission of "improving the state of the world".

For example, BlackRock, one of the world's largest asset managers with ten or $20 trillion in management, is at the bottom of the strip. They're involved in both ends of the Ukraine conflict. You got to salute them for their entrepreneurship, they're also planning to rebuild the rubble in the country. They'll make money either way, which may be one of the reasons why Larry Fink, their CEO, is on the board of directors of the World Economic Forum, along with Chrystia Freeland, Justin Trudeau's deputy prime minister.

They are not a legislature, they are an oligarchy, a kleptocracy. There are dictators represented here who buy their way in and the fact that mere elected officials like Chrystia Freeland are at the same level as billionaires and both have a seat at the same table. Who gave Larry Fink of BlackRock the right to make policy for anyone, let alone for sovereign countries?

But what does it mean to be a global citizen? Who's your legislature? Where can you move around? What rights do you have against this global ruler? And who is the global ruler? Well, Klaus Schwab puts himself and his cronies forward as the people who would rule us all under global citizenship.

I'm here all week with my friends, there's seven of us all together. We're crammed into an Airbnb an hour down the road. We came here on an economy, class airfare. We're not allowed to stay in the fancy hotels on the street. I don't think we can afford to anyways. And we're going to do citizen journalism that you can only get from independent companies like Rebel News.

You see The New York Times, The Wall Street Journal. You see CNBC and all of these companies that purport to be about journalism, but they are not here to ask questions. They are here to get in on the deals, to get their messaging straight, to harmonize with the rest of the media party. We are not welcome here. In fact, on our way in, we were pulled over by police.

Credit to the Swiss police, though, they have a very light touch. Especially compared to Justin Trudeau, the bully. When I said Switzerland's a free country, he seemed to agree.

Over the days ahead, we'll try and buttonhole the VIPs as they walk down the street, at least the parts where we're allowed to go. We'll also talk about thematic things like the difference between the high life here at Davos, the private jets, the luxury hotels, the steak and champagne versus the low carbon lifestyle they demand while you and I are meant to eat bugs, own nothing and be happy.