Should police bow down to anyone? 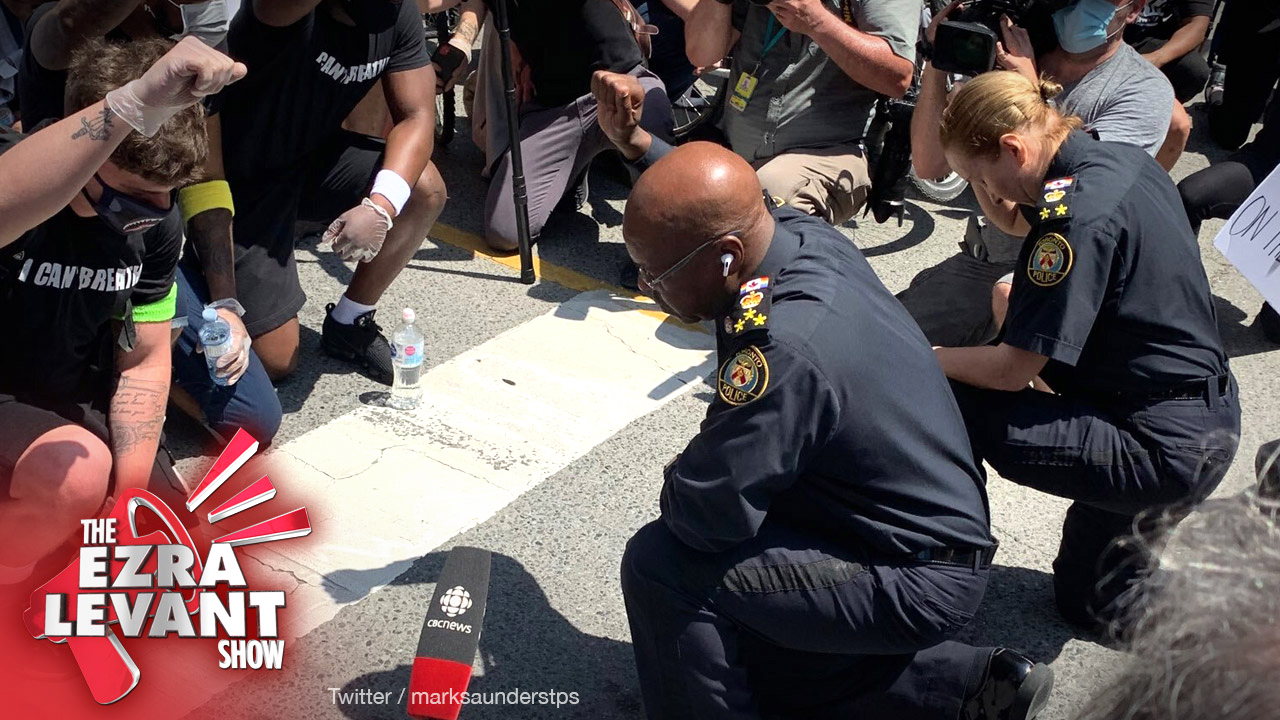 Did you see the pictures of Toronto’s black police chief, Mark Saunders, bending the knee, submitting, at a Black Lives Matter protest? And there were white activists holding their fists up, making the black power salute.

So a successful black man, the man in charge of policing for Canada’s biggest city, Canada’s blackest city, he’s being shamed and degraded by, amongst others, some white leftists.

Saunders was at least upright; the police chief of the second-largest city in Massachusetts, called Worcester, had his face on the ground, his hands behind his back.

Have you, in your entire life, ever seen anyone so prostrate — who wasn’t bowing down to God?

A young hipster, Jacob Frey who bears a resemblance to Justin Trudeau, is the mayor of Minneapolis, where the riots began. He wordered the police to surrender, including to surrender their police station!

Then he danced around with Black Lives Matter activists. Simply dancing with them for five minutes is not a substitute to a grown-up conversation.

But you would be forgetting that our own prime minister is precisely the same way.

As you no doubt saw, Trudeau took a knee at a demonstration, too.

He’s been hiding in his house for two months. Won’t go to work. Won’t go to Parliament. Won’t have a proper press conference or Question period. Says it’s because of the pandemic, social distancing, all that. But there he is. And he always knows where the camera is. And he waits for it. And then he takes a knee.

What exactly is Trudeau taking a knee for? Is it to “stand up to Trump” as the shouters said? Or is it something in Canada he’s apologizing for? If so, what?

He’s been prime minister for five years; all I can think of that he’s done on the race relations file is call people racist. He wore blackface so many times he can’t remember. Oh, and he fired Canada’s first aboriginal justice minister.

TONIGHT I'll talk about the new movement to "defund the police." Activists are pushing for this, but rich liberals like the idea. Because they live in white suburbs, or live in gated communities, or if they’re in New York, they have a doorman.

But let me leave you with some good news.

A new poll asked ordinary Americans what they think the response should be. It asks blacks and whites. Republicans and Democrats:

Would you support or oppose cities taking the following measures to address protests and demonstrations in dozens of U.S. cities in response to the death of George Floyd? Calling in the national guard to supplement city police forces?

Forty-two per cent of Americans strongly support it. Another 29 per cent somewhat support it. That’s 71 per cent.

People want not just police — they want the National Guard.

Don’t bow down to anyone — other than God, and if you’re a Canadian monarchist, bow to the Queen as our head of state.

But don’t bow to the mob. Never.

NEXT: U.S. columnist and author of American Ingrate: Ilhan Omar and the Progressive-Islamist Takeover of the Democratic Party, Ben Weingarten joins me to talk about Ilhan Omar wanting to defund the police.