During a Conservative pit stop in Winnipeg, the party leader took potshots at the Trudeau Liberals for their participation in the World Economic Forum, the annual meeting of which begins on January 16. 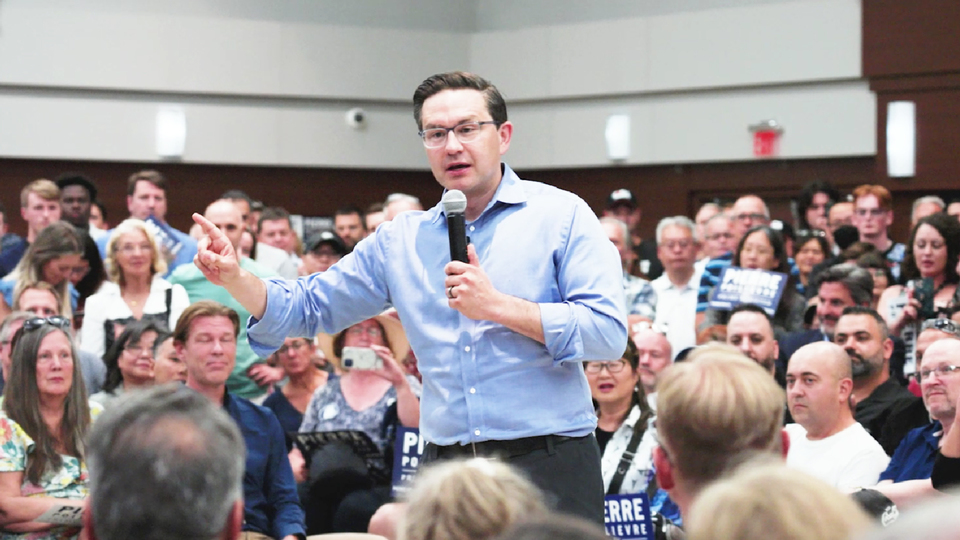 During a Conservative pit stop in Winnipeg, party leader Pierre Poilievre took potshots at the Trudeau Liberals and their allies in the media.

In front of a crowd of several hundred supporters, the opposition leader jokingly pledged to convert the CBC headquarters into family housing and offer the prime minister a one-way ticket to Hollywood.

"It just warms my heart to think of a beautiful family pulling up in a U-Haul to move into their new home in the former headquarters of the CBC," Poilievre told the lively crowd.

He humorously conveyed his intent to defund the publicly-funded broadcaster. "We’ll be very targeted in finding savings. For example, how about we defund the CBC?" he said to thunderous applause.

In 2021, Cabinet determined that CBC qualified for a COVID bailout of $21 million "in immediate operational support" as part of their total parliamentary grant of $1.36 billion.

"It's not fair to ask struggling taxpayers to pay higher taxes so the taxpayer-funded CBC can give itself millions in bonuses and pay raises during a pandemic," said Franco Terrazzano, federal director of the Taxpayers Federation.

"If it has enough money to hand out millions in bonuses and pay raises during a pandemic, taxpayers have every right to question why the CBC is taking so much from us."

Poilievre also took aim at the Trudeau Liberals on Friday for participating in the World Economic Forum (WEF). According to him, there will be no "hoity-toities" from federal Conservative ranks at the summit.

"My ministers in my government will be banned from participating in the World Economic Forum when I'm in government," said Poilievre in May. "Work for Canada. Make it a one-way ticket if you want to go to Davos — to that conference."

Among those in attendance is Deputy Prime Minister Chrystia Freeland, who frequented Davos several times as a member of the WEF's board of trustees. She last spoke at the forum in 2021 about implementing "stakeholder capitalism" but was noticeably absent last year.

The annual summit will commence in Davos on Monday, January 16, and finish on Friday, January 20. On January 18, Freeland will participate in a panel hosted by CNN anchor Fareed Zakaria titled, Restoring Security and Peace.

In 2021, Freeland referred to the COVID pandemic as an "opportunity for a reset." She called it a chance to "accelerate our pre-pandemic efforts to reimagine economic systems."

Poilievre doesn't believe the forum will find meaningful solutions to bread-and-butter issues that impact Canadians. During his bid for leadership, he boycotted the WEF after the controversial summit faced accusations of championing significant influence over domestic policy and decision-making.

According to the transfer payments section of the 2020-2021 Public Accounts of Canada, the WEF received $2,915,095 from Canadian taxpayers through grants and contributions.

The largest of the transfer payments to WEF was a $1,141,851 contribution from the International Development Assistance for Multilateral Programming. WEF also received another $1 million grant under the same program.

The majority of Canadians want Prime Minister Justin Trudeau to take “a walk in the snow” in the new year, according to a recent Ipsos poll.

Trudeau told CTV News that “it sucks” when members of his government violate ethics laws, but argued that the 'system works' since the public knows about the scandals.

On January 19, Ng will also speak at the WEF summit, specifically on investment in an economic panel called Bricks or Clicks: What kind of Investment do Economies Need?

"Many countries now invest more in intangible assets, such as IP, than in tangible assets like buildings and machinery, with consequences for innovation, productivity, market concentration, and more," reads the WEF event description. "What does the rise of the intangible economy mean, and how should policy-makers respond?"

Rebel News is sending a team of SEVEN reporters, videographers and producers led by our fearless Rebel Commander Ezra Levant to Davos, Switzerland from January 16 to 20 to cover the World Economic Forum's 2023 Annual Meeting. Follow along with our coverage and learn how you can support our reporting at WEFReports.com.