The recent blockade at the major Canada/U.S. trade route is stirring the pot on both sides of the border. Rebel is on the scene at the Windsor protest to learn more. 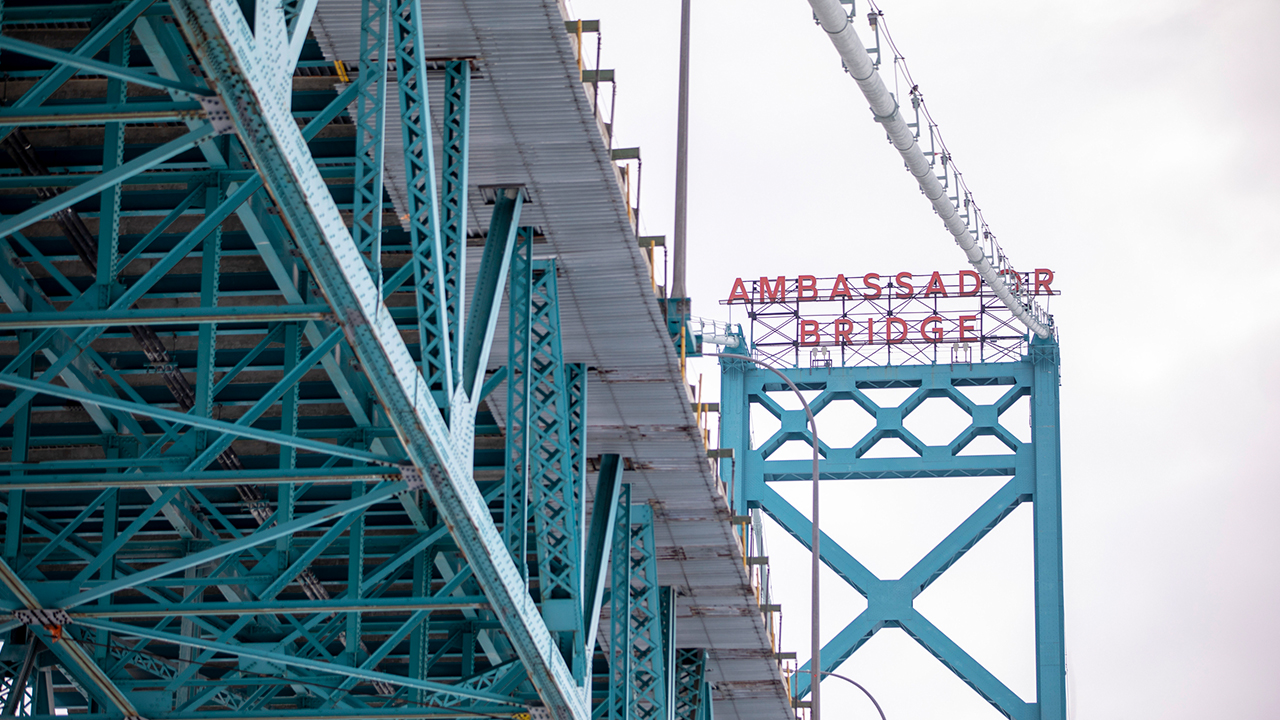 The Ambassador Bridge, which connects Windsor Ontario with Detroit Michigan, is the busiest international crossing in the world.

Coming in at 1.5 miles long, more than 40,000 people including commuters, tourists and truck drivers cross each day, carrying an average of $323 million worth of goods.

The bridge plays a substantial role in both the Canadian and U.S. auto industries, as it is a key conduit to transport motor vehicle components and parts.

So when things come to a grinding halt at that border crossing, as has occurred recently amid the Canadian freedom convoy and protests making headlines, it is bound to make waves.

After almost two weeks of protests occurring across the country, including a longstanding blockade with ongoing negotiations at the Coutts “Sweetgrass” Canada/U.S. border, the protest made it’s way to the Ambassador Bridge on Tuesday.

The protesters vocalized similar messages that have been shared with our other reporters throughout the convoy in every location – essentially, standing for freedom of choice, and against government overreach.

As of Wednesday afternoon, the border was open to U.S.-bound traffic, but closed to Canadian-bound travel. The U.S. border had opened all nine commercial lanes including a fast lane to deal with diverted traffic, but were preparing for reported protests on the Canadian (Windsor) side later that evening.

Shocking footage has circulated of the blocked border, showing trucks lined up bumper to bumper on the massive suspension bridge and lined up as far as the eye could see up the highway into Windsor.

The Ambassador Bridge connecting Detroit and Windsor is completely blocked off by truckers. The fire rises! pic.twitter.com/A7tLZtPzeW

While the protest continued, political leaders started to take notice.

On Wednesday morning, Ontario Premier Doug Ford called for an end to the protests at the bridge, stating “the illegal occupation and blockade happening in Ontario must stop” and noting his concern about the bridge being a “vital trade corridor”.

At the White House on Wednesday, Press Secretary Jen Psaki said that the Biden administration is in close contact with Governor Gretchen Whitmer, auto companies, customer/border officials and Canadian counterparts to “monitor the situation”, stating the risk to the auto industry due to the bridge accounting for “about 25% of trade between the two countries”.

Indeed, the disruption to their economy, and the auto industry, is already occurring. As of Thursday morning, Toyota will not produce vehicles at their three Ontario plants this week due to the bridge crossing and reports of further upcoming protests at other major U.S./Canada crossings. Output has also been affected at the Ford engine plant as well as the Chrysler-maker Stellantis.

Given that one of the foundational goals of the Canadian truckers convoy is to have the vaccination requirement removed for border crossings, the opinions and subsequent policies created by Joe Biden are extremely important, and also could have a major effect on whether Canadian Prime Minister Justin Trudeau decides to take action.

With the auto industry in jeopardy, countless jobs are at risk, which is something that will not be ignored by citizens nor politicians.

Trudeau has not yet made a statement regarding the Ambassador Bridge border crossing specifically, though he has made recent statements against the convoy more broadly, continuing to propagate the narrative that the convoy is generally hateful, bigoted and has “blockaded democracy”.

There is little doubt in any of the convoy supporter’s minds that Trudeau is not going to negotiate with the truckers, however there is a glimmer of hope that the pressure now put on the U.S. officials with the Ambassador Bridge protest will result in political pushback that may force Trudeau to take notice and compromise, though hardly for altruistic reasons.

Rebel reporter David Menzies headed down to the scene again Thursday along with Isabelle Rivo to continue bringing the other side of the story from the ground, and showing video footage of the long line up of vehicles.

The crowd was jovial, and at one point, Tim Stanley, a business owner, gave a passionate speech in front of the blockade.

Unfortunately, rumours were circulating throughout the day that an injunction is in the works to shut down the blockades, but as of the time of this article being released, no further details are known.

David Menzies spoke with lawyers from The Democracy Fund who are assisting protesters on the ground at the Ambassador Bridge.

The coming hours and days will be crucial for the truckers in their fight against proof of vaccine mandates and COVID-19 restrictions.

Rebel's reporters are covering protest and trucker convoy-related events in locations across Canada! Please follow us at www.ConvoyReports.com to follow our breaking updates and to support our journalists. Unlike the legacy media, Rebel doesn’t take a dime of taxpayer funding. We rely on generous donations from people like yourself! If you’d like to be a part of helping us bring you and the world the other side of the story during these groundbreaking protests, please consider a financial donation, or just help us out by sharing our content. Thank you SO MUCH to all of you who have supported us so far!