While the freedom convoy protests continue in Ottawa, there is no shortage of headlines regarding huge blockades and policy updates taking place in the western province of Alberta. 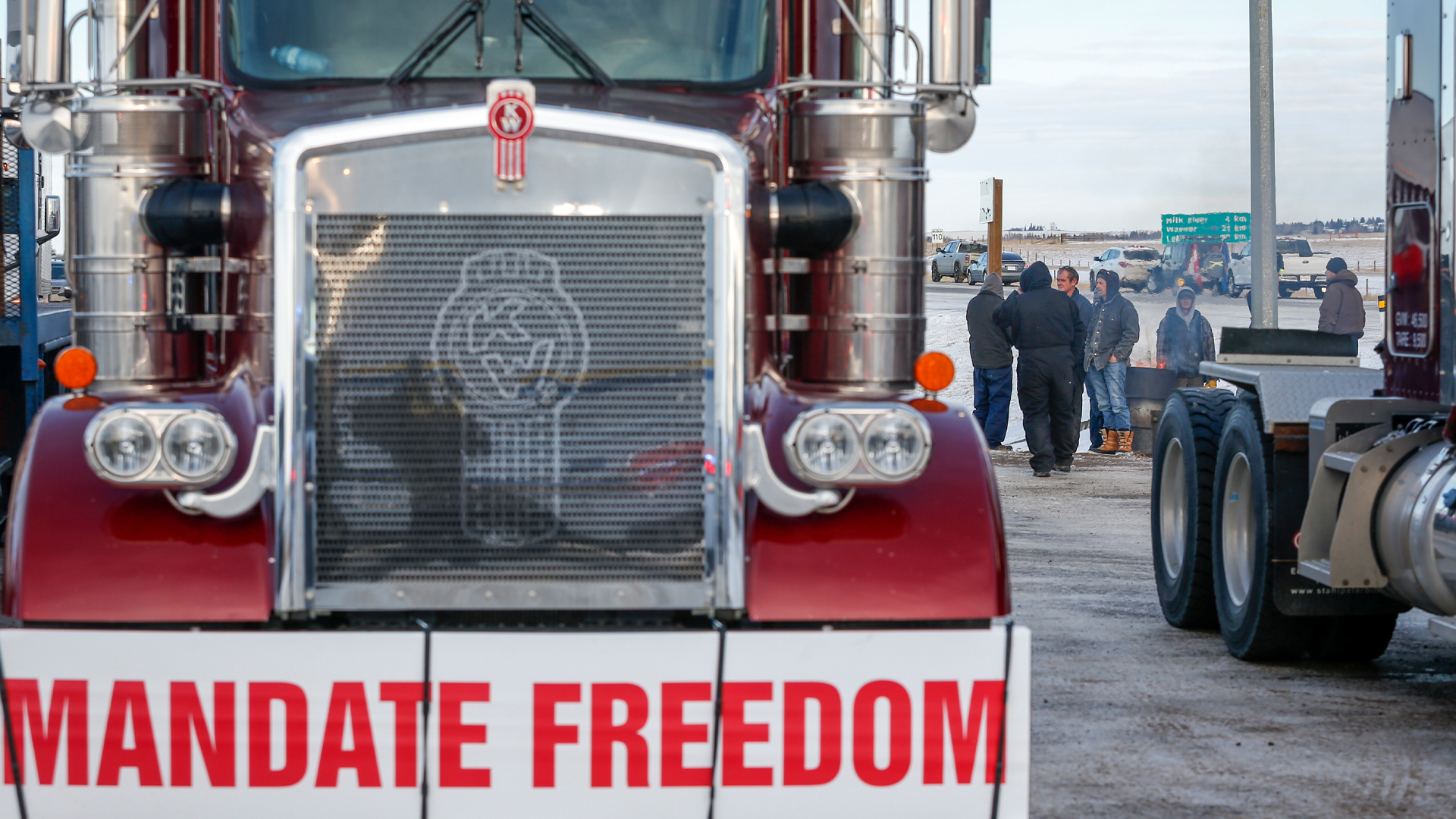 It can be tough to keep up with the plethora of related headlines and announcements as the days and weeks of the great Canadian freedom convoy roll by! Rebel continues to have reporters in locations countrywide, including in the rural regions of Coutts and Milk River, Alberta where reporters Kian Simone, Syd Fizzard and Adam Soos are currently embedded in the action there.

If you’re unfamiliar with the situation there, this Rebel report provides a good summary up to this point.

On Monday, farmers with massive pieces of heavy farm equipment joined the demonstration, while another protest popped up at a checkpoint in Milk River.

Late into the evening on Monday, Without Papers Pizza reported on Twitter that the RCMP had blockaded protesters.

A Second RCMP checkpoint in Milk River now blocks in the hundreds of supporters who have been trying to get in Coutts.

Those who are protesting mandates, drivers crossing the border and locals now have to show their papers to travel freely in southern Alberta. https://t.co/j684ET4IoX

This continued into the afternoon on Tuesday.

BREAKING: RCMP are once again preventing traffic from heading south at the Milk River, Alberta checkpoint. If you leave the area, you won't be allowed back in. No vehicles are being granted access.

Learn more and chip in for the truckers' legal fees at https://t.co/wNs1Jyx6DD. pic.twitter.com/pDoUVT0n3D

At that time, the truckers were quite concerned about a potential announcement from the police of a possible injunction from the provincial government; however, that did not end up happening.

This all happened just before Premier Jason Kenney made his big announcement about upcoming COVID-19 policy changes, which was huge news in Alberta. The truckers anxiously awaited the live press conference inside.

RCMP is here to speak with the truckers lawyer, Chad Williamson.

30 minutes to Kenneys announcement regarding the mandates going forward in Alberta.

Help the truckers in their legal defence at https://t.co/HejJhaNuDA pic.twitter.com/tpJhP3A43L

The silence here is deafening.

The truckers watch, as the the world watches Kenneys announcement for mandates in Alberta.

In a nutshell, Kenney announced that he would follow a three-step plan to remove public health restrictions, starting with the Restriction Exemption Program which would be removed as of midnight Tuesday.

How did the Coutts truckers receive this news? Well, they essentially said it wasn’t good enough; they want ALL mandates gone.

He is however keeping masks till March 1st.

If you're wondering how the Coutts truckers recieved this - they want ALL mandates gone. Even the arrows in grocery stores.

BREAKING: Border is once again blocked after Kenney's statement today.

The truckers wanted ALL mandates not just some.

As a side note, one of the elements of Kenney’s speech was that he believes “it’s quite likely that for the rest of our lives we’re probably going to need to take an annual COVID shot much like the annual flu shot.” It was not made clear whether the premier planned to mandate such a shot.

You have got to be kidding me. https://t.co/DokFsS3Cgv

Just before 8:30 p.m., the RCMP Alberta Twitter account posted that the north and southbound lanes to the Coutts border crossing were closed due to the protesters.

Please be advised the north and southbound lanes to the Coutts border crossing are now closed due to protester's blockade.

Since the truckers held their ground, the RCMP moved in with helicopters on scene mid-evening, surrounding the truckers.

RCMP moving in with helicopters on scene, unsure if they are planning on enforcement.

Help them in their legal defence at https://t.co/HejJhaNuDA

Help us bring you this developing story by donating at https://t.co/NxAr5VnRyw pic.twitter.com/TMqbYy627d

So, more farmers showed up.

More farmers just showed up in Coutts, right after the first batch blocked access to the border.

Despite the tensions with the RCMP and politicians, especially Kenney, there are some politicians stepping up in solidarity with the protesters. One such politician is Coutts-area MLA Grant Hunter, who is part of Premier Kenney’s UCP caucus.

He described the Freedom Convoy and related protests as an 'inspiration to the world' to fight for freedoms, noting that it is growing quickly and politicians will have to “get on board.”

Alberta will continue to be a place to watch in the coming days and weeks, as the protests at and near the border grow, and as we see various political dynamics at play, such as municipal leaders, including the recently-elected Calgary Mayor Jyoti Gondek who posted a long thread this morning about her concerns with Kenney’s removal of restrictions.

1/6 I have spent the last 12+ hours reflecting on the provincial announcement to lift pandemic restrictions. In that time, I have seen concern from healthcare workers, teachers, parents, businesses & many other engaged Calgarians. All feel their voices went unheard.

Rebel News will continue to be there for breaking news as it happens, to provide fair coverage and the other side of the story.

Also remember to tune in to some of the great coverage our journalists are getting from media elsewhere in the world, in particular in the U.S., including Adam Soos recent appearance on the “Clay Travis & Buck Sexton Show”.

Adam Soos Joins Us on the Ground from the Trucker Protest
"They said, 'You know what? We're rolling across Canada and we're standing together. Enough is enough.'" - @ATSoos #FreedomConvoy2022 #Trudeauhttps://t.co/t5SkUZY1c2 pic.twitter.com/AAn0IwKF4r


Rebel News has three reporters in the area, including two embedded in the Coutts protest and another in Milk River. To support their independent journalism, please visit www.ConvoyReports.com.

A crowdfunded lawyer is assisting the blockaders in their negotiations with the police. To help pay his fees, please visit www.TruckerLawyer.ca.