The small western town is now home to plenty of honks for freedom, as well as RCMP presence. 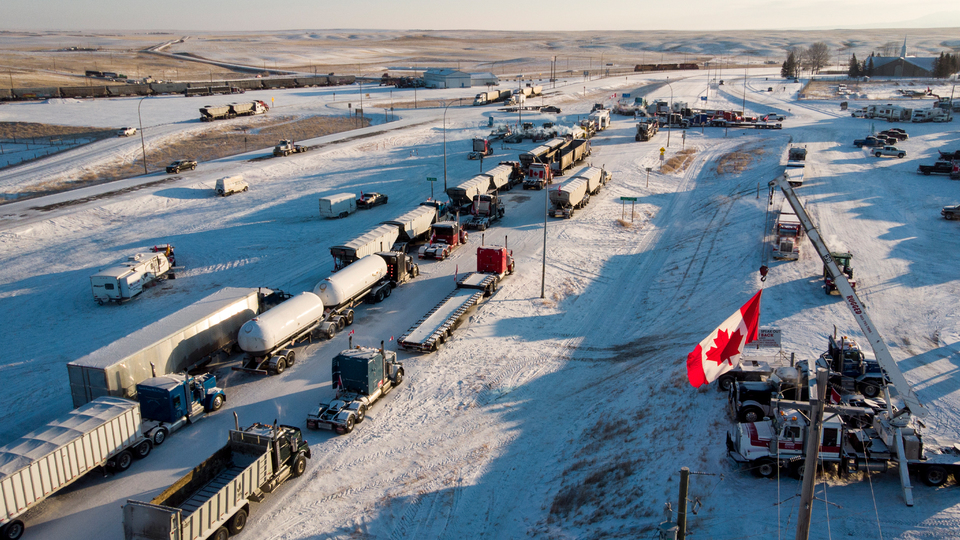 Over the past week, the normally non-newsworthy, very small town of Coutts, Alberta has become a well-known name among anyone following along with the truckers convoy. Now, just a 20-minute drive northwest of Coutts, another rural Alberta town is making news.

Milk River, a community with a population of less than 1,000 people, recently became the site of another major event within the Freedom Convoy protests.

When Rebel reporter Adam Soos learned that a blockade had begun in Milk River, he quickly headed to the site so that he could provide on-the-ground, honest coverage.

I'll be on my way to the Milk River, Alberta RCMP blockade shortly. Be sure to follow @kiansimone44, @SydFizzard, @BezirganMocha and I for live updates, and go to https://t.co/E0mR8j13sz for even more in depth coverage.

Early in the evening, Adam reported high spirits and many sights and sounds in Milk River, noting that ‘’Freedom is in the air!”

Some truly incredible sights and sounds here at the RCMP blockade just outside of Milk River, Alberta.

Freedom is in the air!

At around 8:45 p.m., the big rigs started joining in, with all types of heavy equipment adorned with Canadian flags and messages of freedom rolling in.

The big rigs are rolling for freedom at the RCMP blockade just outside of Milk River, Alberta.

For more coverage and to support our independent journalism go to https://t.co/E0mR8j13sz. pic.twitter.com/6ZXhBxZ8LU

Less than two hours later, we learned from Rebel reporter Kian Simone that farmers at the Coutts border, approximately 20km south of Milk River, had once again blocked the border.

BREAKING: The farmers have blocked the border in Coutts.

Adam interviewed one trucker in Milk River about his thoughts on this action by the farmers at Coutts, who agreed with it wholeheartedly, citing that “What are we left with? Look at the circus? ... This is about human rights, not only civil rights…”

Protestor at the Milk River, Alberta barricade reacts to farmers in Coutts once again closing the border and blocking the road due to a lack of response and action by @jkenney and government officials.

Only half an hour before midnight, Adam announced the breaking news that the RCMP had reportedly erected another blockade in Milk River, with people not being allowed in to the original RCMP blockade area where the main protests were occurring, creating somewhat of a “no man’s land”.

BREAKING: RCMP have reportedly erected another blockade in Milk River, Alberta. Folks are not being allowed in to the original RCMP blockade area where people are protesting from either direction presently. We are in no man's land between two blockades.https://t.co/Ic5lLZuPc6 pic.twitter.com/MSRpLkqDfw

Then, into the wee hours of the morning of Feb.8 at 1:21 a.m., Adam reported that the RCMP had shut down all incoming traffic to the blockade, and advised that no further negotiations would take place until later in the morning.

RCMP have shutdown all incoming traffic to the Milk River blockade & they have informed us that no further negotiations will take place until morning.

We'll be back at it tomorrow. pic.twitter.com/gcaseEJWRj

At about 2:20 p.m., Adam advised that the RCMP had prevented traffic once again from heading south at the Milk River checkpoint, so if someone were to leave the area, they wouldn’t be allowed back in.

BREAKING: RCMP are once again preventing traffic from heading south at the Milk River, Alberta checkpoint. If you leave the area, you won't be allowed back in. No vehicles are being granted access.

Learn more and chip in for the truckers' legal fees at https://t.co/wNs1Jyx6DD. pic.twitter.com/pDoUVT0n3D

Around 3:30 p.m., Adam reported that the RCMP seemingly opened the Milk River checkpoint and allowed traffic made up of both protesters and truckers seeking to cross at the border, just as the mainstream media set up their cameras!

The RCMP has seemingly arbitrarily opened the Milk River checkpoint and allowed traffic comprised of both protestors and truckers seeking to cross at the border through just as MSM set up their cameras.

(Excuse the audio quality, the wind is howling). https://t.co/wNs1Jyx6DD pic.twitter.com/g6Kbx5bfXe

So for now, the protesters and truckers will continue to stand firm — and by most accounts, it appears they are willing to wait as long as it takes.

Rebel News has three reporters in the area, including two embedded in the Coutts protest and another in Milk River. To support their independent journalism, please visit www.ConvoyReports.com.

A crowdfunded lawyer is assisting the blockaders in their negotiations with the police. To help pay his fees, please visit www.TruckerLawyer.ca.