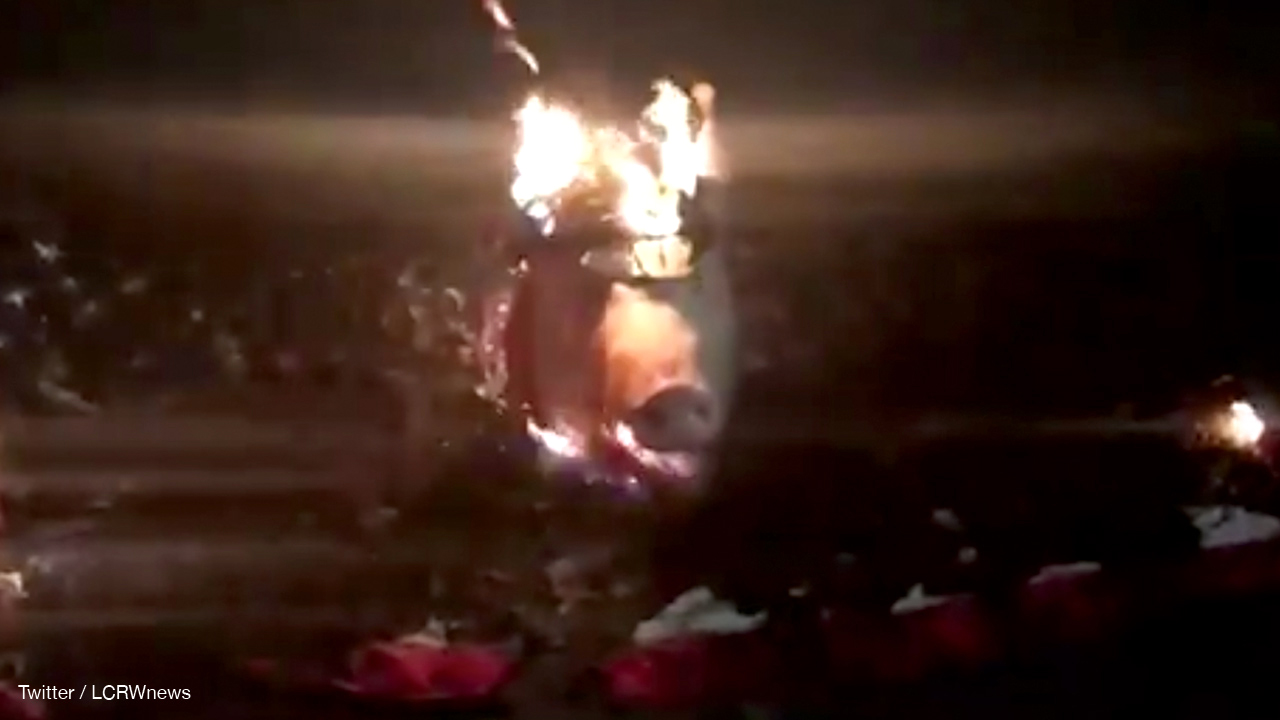 Antifa activists in Portland set fire to a severed pig head on Thursday night by the federal courthouse. The area has been the site of nightly riots calling for the abolition of the police following the highly publicized death of George Floyd at the end of May.

Andy Ngo, who reposted the video taken by the leftist “Left Wing Coast Watch” Twitter account, detailed how “Antifa protesters dumped a bloody severed pig’s head on an American flag outside the Justice Center in downtown Portland. They put a cop’s hat on it and set all of it on fire,” he wrote.

Antifa protesters dumped a bloody severed pig's head on an American flag outside the Justice Center in downtown Portland. They put a cop's hat on it and set all of it on fire. #PortlandRiots #antifa pic.twitter.com/qfAOT4ItxP

Ngo, who has covered the riots in Portland before they became a household topic in 2017, noted that a live domesticated pig was found abandoned near downtown Portland in June. Police, who rescued the animal, believe that a left-wing protester had planned to sacrifice the pig as an act of anti-police protest but abandoned it at the last minute—perhaps following objections from other protesters

PPB Officers are looking for the owner of this sleepy pig. If you are the owner, call non-emergency dispatch at 503-823-3333. We would like to reunite him with his owner. pic.twitter.com/SlYbLfckYl

Police named the pig Betty and said “someone in the community” had wrapped the abandoned animal in a blanket to keep it warm before informing the police, who later found it safe shelter at a local animal farm. The severed pig head at Thursday’s protest is not believed to be from the same animal.

Violence in Portland has only escalated since President Trump ordered an augmentation of its standing force of US Marshals, who have been defending the building over the past two weeks. Democrats blame the presence of federal law enforcement for the violence, but the situation was very much out of control long before their arrival as Antifa militants took to the streets every night to engage in organized skirmishes against the Portland Police Bureau.

“These aren’t late night demonstrations. This is criminal activity,” he said. “There's a difference. What you have failed, and the media have failed to distinguish, between – you seem unwilling to call people engaged in criminal conduct, as criminals, as opposed to lawful protesting.”

Williams’ claims are backed up by numerous videos posted nightly by conservative voices and independent journalists on social media, some of whom took to the front lines of the courthouse to document the ongoing riots.

On Tuesday night, a militant threw an explosive device at the courthouse.

This Antifa militant is throwing IEDs, not fireworks at the federal courthouse. pic.twitter.com/WS6D4YaLuk

Reports that federal officers would be leaving Portland this week, as claimed by Oregon Governor Kate Brown, were incorrect. Speaking on behalf of the Department of Homeland Security, Acting Secretary Chad Wolf stated that the agency would continue to maintain its presence at the courthouse until it is no longer attacked.

“The state of Oregon is finally agreeing to cooperate with our federal forces — exactly what we asked for since the nightly violence broke out two months ago. We're glad Oregon is now correcting their months long error,” he wrote on Twitter. “We will maintain our current, augmented federal law enforcement personnel in Portland until we are assured that the Hatfield Federal Courthouse and other federal properties will no longer be attacked and that the seat of justice in Portland will remain secure.

On Thursday’s edition of The Ezra Levant Show, Ezra was joined by Breitbart Editor-at-Large Joel Pollak to discuss the ongoing violence, which continues to be downplayed by the mainstream media.