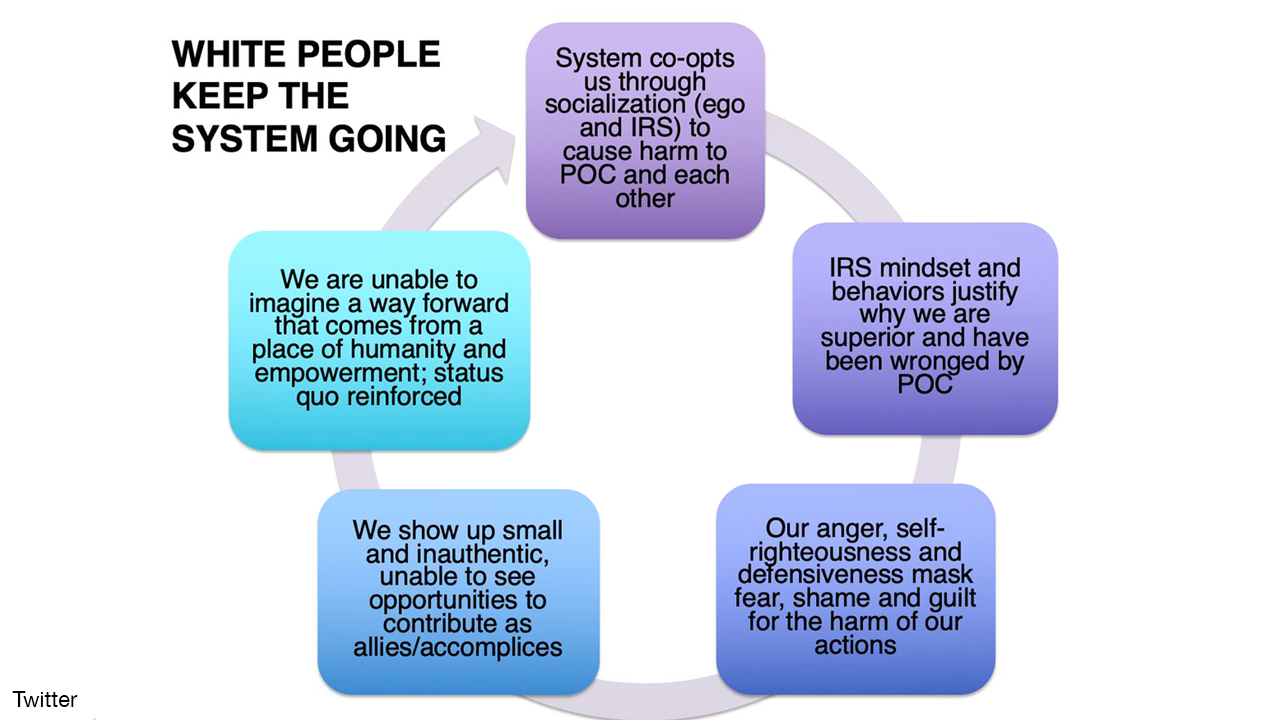 The City of Seattle reportedly hosted a training session on “Interrupting Internalized Racial Superiority and Whiteness” to confront the inherent racism of its white employees.

The session, which reportedly took place in June, was designed to help whites affirm their “complicity in racism” and upend their “whiteness,” which might as well be thought of as a sin in the age of wokeness.

Christopher E. Rufo, the director of Discovery Institute’s Center on Wealth and Poverty, blew the whistle on the seminar and released details of the training through a public records request.

He notes that the event encouraged white city employees to “let go” of “comfort” and “guaranteed physical safety,” among other things, that they take for granted as white people.

In Rufo’s thread, diversity trainers reportedly told white participants that the concepts of “perfectionism,” “individualism,” and “objectivity” were forms of internalized racial superiority.

Diversity organizers encouraged white attendants to “practice self-talk that affirms complicity in racism” and to work towards “undoing [their] own whiteness” as means of fighting white supremacy.

The trainers urged attendants to identify their “trauma, patterns or other unwell ways of being,” and encouraged them to recognize how their behaviours are indeed racist.

The City of Seattle diversity trainers encourage white employees to "practice self-talk that affirms [their] complicity in racism" and work on "undoing your own whiteness." pic.twitter.com/CJxNEcIeh2

Letting go of their traumas, trainers said, required that white people give up things such as comfort, “any expectations or presumptions of emotional safety that is either uninterrupted or immediately restored,” guaranteed physical safety, “control over other people and over the land,” social status, and also the ability to fit in all the time.

The list also called on whites to stop accepting jobs and promotions that they understood they were not qualified to perform.

Trainers set up a flow chart that outlined how white people hurt persons of colour, “show up small and inauthentic,” and are unable to access their humanity.

Then they go through a flow chart that outlines how white people "cause harm to POC," "show up small and inauthentic," and are unable to access their "humanity." pic.twitter.com/jcJppWXe0k

Rufo then posted a screenshot of an email about the training that reveals that the training seminar was designed specifically for white employees to show them their “complicity in the system of white supremacy” and what they needed to do to be accountable to their non-white counterparts.

A document tied to the event, titled “Assimilation into Whiteness,” also reveals that people who “pass” as white must also be considered white, including Arabs and Jews.

In case some people are wondering if they're "really white," they pass out a datasheet called "Assimilation into Whiteness."

Are you of Arab, Jewish, Finnish, German, Italian, Armenian or Irish descent? You're definitely white. No getting out of this. pic.twitter.com/mqsCUB9Ijr

Rufo states that the city refused to provide information on the diversity trainers or how much they spent on the seminar dedicated to making white people recognize their complicity in white supremacy.

"City of Seattle has refused to provide the names of the diversity trainers, the budget for the program, or the video of the session,” he wrote. “I'm going to keep pushing—because this is exactly the kind of thought-policing they want to implement everywhere."